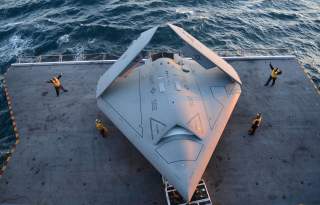 Along with a new air superiority fighter, the United States Navy must develop a new long-range unmanned combat air vehicle (UCAV) to counter rapidly emerging anti-access/area-denial threats, particularly in the Western Pacific. The Navy would also have to develop another separate unmanned aircraft for the aerial refueling tanker role. In a new report commissioned by the U.S. Navy, the Center for Strategic and Budgetary Assessments lays out the case for developing such capabilities.

“The worst-case scenario for a conflict under the proposed fleet architecture would be to have no indications or warning of imminent aggression with the Maneuver Force at the farthest reach of its Indo–Asia–Pacific area of operations,” the report states. “The Maneuver Force could start from the Western Indian Ocean or Central Pacific Ocean when conflict breaks out and arrive about 2000 nm from the Chinese coast when the Deterrence Force needs to withdraw after 2 days of combat.”

However, a 2000-mile mission would strain human endurance and an unrefueled range of more than 10 hours would require an enormous aircraft that might not fit on a carrier flight deck. Thus, the CSBA proposal calls for a smaller aircraft that would be supported by a tanker.

“A 2000-mile combat sortie, however, would take at least 10 hours round-trip, which exceeds the reasonable endurance of a pilot in an ejection seat,” the report stats. “For these missions, the CVW would therefore need an Unmanned Combat Aerial Vehicle (UCAV) with an unrefueled combat radius of greater than 500 nm to ensure refueling aircraft could remain outside the reach of adversary air defenses and defensive CAPs. The vehicle would also need to be stealthy, so it can penetrate the highly contested airspace near the Chinese mainland.”

The report acknowledges that unmanned aircraft technology has not advanced to the point where a UCAV could be designed to be a multirole machine—a specialized manned fighter is still needed for the air superiority role.

“The UCAV would not have the characteristics, however, that enable it to be an efficient multimission aircraft,” the report states. “To minimize the UCAV’s radar signature, it would likely have a ‘flying wing’ structure like a B-2 bomber or the TERN UAV that lacks traditional wings or a tail. This design reduces the number of surfaces that can reflect radar energy, but also reduces the aircraft’s lift and, in turn, payload or endurance. Therefore, the UCAV would not have the very long endurance and high payload capacity desired for refueling, logistics, or surveillance missions.”

Each carrier would have to carry at least six UCAVs—effectively filling the role once held by the long-retired Grumman A-6 Intruder. “As noted above, the new CVW will need two types of unmanned vehicles: a UCAV and a tanker/utility aircraft,” the report states. “Six UCAVs in a squadron would yield four to five operational aircraft to support initial long-range attacks as the Deterrence Force retrogrades. With two CVWs in the Maneuver Force, eight to ten aircraft would be able to engage the enemy from long range. Similarly, a squadron of six unmanned utility aircraft per CVW would be able to maintain eight to ten operational tankers total, which would be enough to support the CAPs and escort operations of both CVWs.”

The CSBA study will be used by the Navy to shape the future of the fleet as the service rebuilds after nearly a decade of neglect. "The Navy is at an inflection point where we are back in competition,” chief of naval operations Adm. John Richardson told The National Interest in a statement. “Many of the ideas from these studies will help us win that competition.  To win, our thinking must sharp and these studies help us - they give us exactly what we want...some fresh ideas. Each study provided ideas that in some cases validated and advanced the Navy's current thinking.  Some of the recommendations from the studies are so sound that we will act on them quickly.  Other ideas show promise and we'll study those hard.  The studies will be rolled into our program of analysis, war games, experiments, technology demonstrations, and prototyping.”