How Many More Rounds for the Colombia Peace Talks? 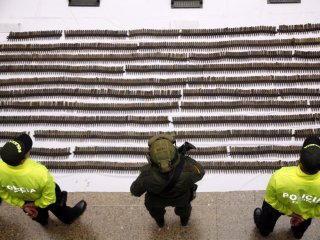 Six months ago, when President Juan Manuel Santos announced with much fanfare that the Government and FARC had agreed to sign a final peace treaty on 23 March 2016, many in Colombia believed the current round of negotiations had reached a point of no return. Now there’s growing doubt that the promised final settlement will be delivered this week.

Despite the expectation that there will be big news on Wednesday, two weeks ago President Santos said that Colombia would not sign a “bad peace deal” to meet the self-imposed deadline. The date had been agreed upon by both the government and the insurgency in a bid to hasten negotiations. Yet following the president’s comments, FARC leaders claimed that it would be impossible to sign an amicable agreement with the Colombian government by March 23. Although both sides have agreed upon key components of the negotiation agenda, including justice for war crimes, rural reform, illicit drug trafficking and political participation for the FARC, some thorny issues still remain—such as how to end the conflict, and the much anticipated conditions of rebel disarmament and demobilization. For the FARC, terms of demobilization that signify insurgent “surrender” have contributed to their disapproval of the government’s current proposal. As both parties agree the conditions aren’t in place for reaching a final peace treaty, it’s unclear when the pen will hit the paper.

What is clear though, is that Santos has overcommitted and under-delivered towards an increasingly dissatisfied population. The Colombian people aren’t happy with the way he is approaching the peace talks, nor running the country. No less than 64 percent of Colombians disapproved of the president’s policies in the first poll of 2016. A recent economic slowdown has led to skyrocketing food prices; and a Tasmanian-like hydro-electric energy crisis has the country on the verge of enforcing power blackouts.

Gabriel García Márquez once wrote that “in the end, it is impossible not to become what others believe you are.” Now that fractures within the Santos administration’s approach are coming to light, the President shouldn’t be surprised that missing the March 23 deadline may spell big trouble for his government. Colombian society has long been deeply skeptical of FARC’s intentions to abandon the armed struggle. Perhaps rightly so, given that in the last round of negotiations under President Andres Pastrana, a demobilization zone of 42,000 square kilometres was granted to the guerrillas. The insurgency used the area—roughly the size of Switzerland—to not only negotiate, but also to recuperate, train and further mobilise. Not surprisingly, “Fed-up-with-Santos” strikes are breaking out across the country, criticizing the president for failing to keep his promises.

Still, government negotiators are working at full throttle to secure a deal, hoping an accord can still win popular approval and enhance the President’s standing. But Colombians are increasingly skeptical of the government’s capacity to lay the groundwork for a lasting peace.

It’s no secret that President Santos fiercest opponent, former Colombian President Álvaro Uribe, believes Santos’s peace process is “a capitulation” to FARC. It must be remembered that Santos’s journey to the Casa de Nariño—the Presidential House—wasn’t exactly plain sailing. After losing the first round of the presidential election to Uribe’s candidate—Oscar Ivan Zuluaga—Santos only beat Zuluaga by securing nearly 51 percent of a runoff vote. This left the country divided between Santos and Uribe’s supporters. Bluntly put, the choice was between peace talks or more war, and peace talks won out.

Although not mandatory under the Colombian constitution, President Santos made clear that ratification of the much-anticipated peace deal should involve direct citizen participation. Believing he enjoyed popular support, Santos opted for an all-or-nothing plebiscite rather than a section-by-section referendum to sanction the final peace settlement.

Though only a “yes” from 13 percent of registered voters will seal Santos’s peace deal, with his overconfidence and under-delivery the question remains as to whether lasting peace in Colombia can realistically be achieved by the time Santos leaves office. With growing domestic issues putting pressure on Santos, this is looking increasingly unlikely.

Cesar Alvarez is a researcher at ASPI. Alexandra Phelan is a PhD candidate and Teaching Associate at Monash University. This article first appeared in the Strategist.