How This Maryland Police Department Is Combating the MS-13 Gang 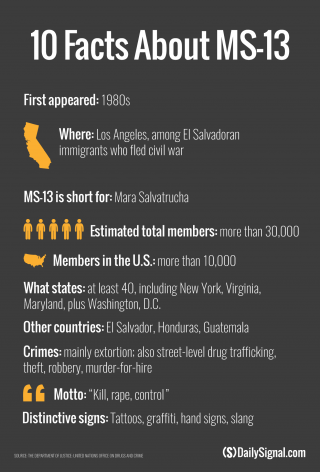 Two years ago, a suburban Maryland county began to see a dramatic rise in killings attributed to MS-13, an international gang with ties to Central America.

In response, the Montgomery County Police Department assigned Capt. Paul Liquorie, a 23-year veteran of the police force, to lead a centralized street gang unit dedicated to stomping out the violence.

In an interview with The Daily Signal, Liquorie, 49, director of the department’s Special Investigations Division, described law enforcement’s approach to combating MS-13 in this affluent county just outside Washington, D.C.

“The Latino community where MS-13 has a presence is terrified,” Liquorie said.

The Trump administration repeatedly has invoked the threat of MS-13, making the gang a central focus of its effort to enforce immigration laws aggressively.

Liquorie, in a Q&A below, describes MS-13’s increasing “brutality and callousness” and how Montgomery County works with federal law enforcement to find and prosecute the gang’s members.

“Law enforcement won’t tolerate this,” Liquorie said of the violence and other crimes associated with MS-13.

The Daily Signal: How long has MS-13 been present in Montgomery County, and what’s different about their activity in the county now?

Liquorie: It always has been a priority because MS-13 has such a presence here in the county.

What we attribute to MS-13 is that since August of 2015, we’ve had seven MS-13-related homicides where we believe the perpetrators are MS-13 and two victims we believe were MS-13.

One of the things most alarming recently is the number of homicides, and the brutality and callousness by which they occur.

What I mean by that is the reasoning behind the violence may just be someone flashing a gang sign on the internet, or someone who may be believed to be a rival gang member.

The murders are not done in the sense of to gain greater territory or monetary benefits for the gang itself.

Another alarming thing is how [MS-13 leaders] try to get junior members to rise in status. To prove your loyalty in the gang, you will have to commit a homicide to get the full confidence of the gang in your abilities.

What we have seen regularly in recent years is just the brutality of the violence. People are lured into wooded areas, [and] usually stabbed with some sort of edged weapon multiple times.

The other thing we have seen change in recent years is they want anyone who is present to be actively involved in the violence.

Rather than one person stabbing the victim, and two others being there on the periphery, they want everybody to stab the body multiple times to say now we are all equally culpable and you will be less likely to snitch or make a deal with prosecutors because you were also involved.

You are just as culpable.

When someone is shot, there is a level of distance. To stab someone is a very personal act. You have to be up close to that person and be right with them as they are dying.

Q: How has the escalation in violence that you are describing been impacted by the flood of unaccompanied Central American youth who have settled in the area in recent years? Are those recent arrivals targeted for gang recruitment?

A: Even outside the gang, there is a different status [perceived] between these new arrivals, these unaccompanied minors, and established immigrants. That means these kids further become alienated.

They don’t fit in at school. Some of them might not fit in at home. They come here hopefully trying to flee violence in their country, so whoever is their sponsor here, those people, many may be struggling economically already and are taking on this additional economic burden of sponsoring someone else.

The gang can come to you and can fill these voids, and that makes [the new arrivals] very susceptible to be gang members.

We see a grooming process very similar to what you would see with pedofiles to gain people’s trust.

A lot of these kids are in over their heads before they know it.

Q: Are the victims of MS-13 violence randomly targeted? What traits characterize the victims?

A: In the vast majority of them, we have been very successful in prosecuting the perpetrator of these crimes, and we have some [cases] that still remain open, where we hear through our investigation that the victims may have had ties to MS-13.

There is usually some affiliation with the gang. They may not be full-fledged members, but there may be some kind of action by the victim that leads [MS-13] to believe they are a rival gang member.

Q: What kind of crime does MS-13 involve itself with? What drives them to violence?

What you see locally is their main form of revenue is extortion. Originally we would see that limited to underground economies, bordellos—or houses of prostitution—[and] cantinas—or unlicensed bars and restaurants that might serve ethnic food as well as beer and wine.

People without status here usually don’t have IDs to get alcohol, so you have this underground economy that serves this clientele. The gang is not running those businesses, but extorting them, providing quote-unquote “protection.”

What we are starting to see and [are] working on is that MS-13 is extorting from legitimate businesses within the Hispanic community. Anecdotally, you are seeing that with apartment complexes where there are a large amount of Hispanic residents.

[MS-13] are consistently looking for people and saying, “We will provide you protection to live in this community.”

The other case you hear anecdotally is where there are legitimate businesses, beer and wine stores for example, of El Salvadorian descent whose proprietors are being threatened by the gang to provide liquor to them and sell to these illicit cantinas. They use social media to realize who the proprietor of the business is, to figure out who their family members are in El Salvador, and they then threaten to do harm to them.

That is outside the reach of American law enforcement. That’s a very difficult problem to work on.

Q: How do you work with federal law enforcement to combat MS-13?

A: We are working closely with the U.S. Attorney’s Office in recent months. We have a large RICO [Racketeer Influenced and Corrupt Organizations Act] case where we have 15 gang members who have been federally indicted and are being prosecuted.

Just like we do with other federal task forces, we have our [Montgomery County Police Department] members on the joint terrorism task force and DEA [Drug Enforcement Agency] task force. Similarly, we have task forces looking at gang activity as well.

We work with the Department of Homeland Security’s investigations arm to try to look at the gang holistically and target the organization as a whole to include its hierarchy.

Q: What is the Montgomery County Police Department’s approach to combating MS-13?

A: We take a holistic or “whole of government” approach.

We have three pillars: prevention, intervention, and suppression, based on best practices from gang programs throughout the country. What you see in Montgomery County on the preventative side is the Recreation Department of the county government going into neighborhoods where there are at-risk youth, to provide positive alternatives so they don’t fall under the lure of the gang.

Intervention falls under the county’s Health and Human Services Department with street outreach, doing outreach in neighborhoods providing the full gamut of services: social, mental health, and other ways that may strengthen the family network and trying to find what’s best to help the child and family divert from gang activity.

Last is the suppression, that falls on the police. All police officers are tasked with [fighting] criminal activity.

Q: Why is Montgomery County vulnerable to MS-13? In other words, why is MS-13 so active in the county?

A: You see that we have a large enclave in the greater D.C. area of Central Americans and a certain percent, a small percentage, are going to be gang members or targeted by gang members.

I can tell you stories anecdotally where somebody starts into the gang and acquiesces and hopes they can limit their activity in the gang and says, “I will just do enough to be a part of the gang and not be targeted by them anymore.” But that starts the grooming process that goes on. There are others in MS-13 that are attached to the power and influence, but there are some who join the gang reluctantly.

MS-13 has become more prominent locally. We have seen the acts are becoming more isolated in the Hispanic community and that’s the double-edged sword for us. You hear from nonprofit organizations that work in these communities, and from school resource officers, that the Latino community where MS-13 has a presence is terrified. At the same time, that also makes them fearful to come forward to report.