How Neocons Are Still Winning in 2016 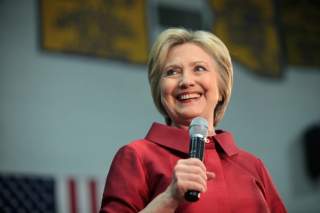 By any standard, the 2016 U.S. presidential race has been extraordinary. The campaigns of maverick candidates such as Democrat Bernie Sanders and Republican Ted Cruz gained strong support, and in the end Donald Trump confounded expectations to become the Republican nominee. The underestimated popularity of these political outsiders highlights the depth of ill-feeling on both the right and left towards the so-called Washington establishment. Largely for this reason the main “establishment” candidate, Democrat nominee Hillary Clinton, still has a real fight on her hands.

Yet, amidst this antiestablishment fervor, one establishment characteristic of American politics and foreign policy is more likely than not to survive: neoconservatism. Beyond Robert Kagan’s statement of support for Clinton, neoconservatives have gone largely unnoticed this time around. Their significance is not entirely ignored; in this publication Michael Lind blames the rise of Trump on neoconservatives themselves, for example. However their vocal absence does not necessarily mean that neoconservatism has passed its use-by date in the United States. In fact, the contrary may be true.

Here we use the term neoconservatism not in its conventional and often derogatory sense. Indeed, in a recent academic article we argued that neoconservatism does not simply represent the ideas of a small band of readily identifiable neoconservatives. While Robert Kagan, William Kristol and other notable figures were instrumental to the rise of a particular strand of neoconservatism under the administration of George W. Bush, neoconservatism itself cannot be narrowly defined according to its individual leaders and followers, or their worldviews (which in any case vary between so-called neocons). Nor should it be simply equated with the now-infamous Bush Doctrine and its blueprint for the post–9/11 War on Terror.

Rather, at its core, neoconservatism is a broad and powerful discourse which is closely underpinned by two widely held and enduring ideas about the United States and the world around it: American virtue and American power. What defines neoconservatism is a largely unchallenged belief that the United States is a virtuous nation with a moral entitlement to superior power for the global good. Thus defined, neoconservatism gave rise to the Bush Doctrine, but the doctrine, which for many epitomizes the very essence of neoconservatism, was not the definitive neoconservatism. Making this distinction helps explain the longer and more mundane lineage of the present neoconservatism. Emerging from the extreme events of 9/11, it was an extreme articulation of long-ingrained ideas about American virtue and power. The perceived conflict of good versus evil, from which Bush’s War on Terror was executed, was not new but historically familiar, having previously guided popular wars against the uncivilized “barbarism” of Native Americans, Cold War communists and others, just as it has done against the Taliban and Islamic extremism today.

Neoconservatism as this form of discourse did not die out with the election of Barack Obama in 2008. Fewer identified “neocons” now occupy positions of influence in Washington, and Obama holds different ideas about the United States and the wider world from those of Bush and his friends. However, it is more accurate to say that in recent years the United States has returned to what we might call a baseline neoconservatism. The War on Terror has abated, but the use of military drones has escalated enormously, and almost ten thousand U.S. troops remain in Afghanistan. While Obama has criticized the 2003 invasion of Iraq, he never rejected the underlying validity of the War on Terror, and he firmly believes in “America’s moral authority.” In his book The Audacity of Hope he professes an admiration for (neocon) Ronald Reagan, giving “the old man his due” for achieving victory in the Cold War and with it the confirmation of American virtue and of global U.S. hegemony.

Today, as arguably the most antiestablishment presidential candidate, Donald Trump may be incoherent, incompetent and naive. Yet his campaign slogan “Make America Great Again,” as one of his few consistencies (alongside the foreign-policy tagline “America First”), plays to ingrained and seductive understandings about an American “greatness”—both of its virtues and its power. The (questionable) business credentials on which he runs lead him to promise defense cuts, but also “a military that’s going to be much stronger than it is right now,” so that “nobody’s going to mess with us.”

In a comprehensive foreign-policy speech, Trump emphasized the United States’ record of “saving the world.” He argued that since victory in the Cold War the United States has veered off course, but crucially that this was the fault of (establishment) individuals, not of America itself: “The world is most peaceful, and most prosperous, when America is strongest. . . . We must make America great again. If we do that, perhaps this century can be the most peaceful and prosperous the world has ever known.” Put differently, then, even as Trump vehemently opposes political correctness, he cannot escape perhaps the most politically correct of all national discourses: those of American virtue and power.

In Hillary Clinton we find agreement with the value of American primacy and her campaign is wrapped up in America’s long history as a “neocon nation.” While debate over Clinton’s relative hawkishness continues, the former secretary of state supported U.S. military action in Iraq, Afghanistan, Libya and Syria, and she advocates a powerful military while subscribing to the notion that America is “the world’s indispensable nation.” Recently, she reaffirmed her belief that the United States is “the greatest country that has ever been created . . . for all of history.” In attacking Donald Trump for underestimating the power of America’s unmatched military and values, she implicitly accepts rather than rejects his worldview, then seeks to outdo him on the question of America’s moral authority and its ability to dominate global security. “If you really believe America is weak—with our military, our values, our capabilities that no other country comes close to matching,” she asserted in reference to Trump, “then you don’t know America.”

Both candidates, one of whom will be the next president of the United States, know what most Americans think about their country. In the aftermath of the invasions of Iraq and Afghanistan, Americans are war-weary and conscious of the need to scale back foreign engagements. Yet 80 percent consider theirs an exceptional nation, and 85 percent report a belief that the United States is a force for good in the world. Stemming from this established American self-image, neoconservatism is not always bold, boisterous and brash. Its influence comes from its underlying and unchallenged discursive appeal to a longstanding sense of who Americans are. Though the rise of Bernie Sanders in particular suggests that not all Americans are in the thrall of this discourse, it is clear that in the presidential contest of 2016 this political establishment remains alive and well. A President Clinton might not embrace neocons to the extent George W. Bush once did. A President Trump could well be deemed a nightmare for neocons. Even so, the quirks and curiosities of the election so far augur no radical paradigmatic shifts for the most historically defining elements of U.S. foreign policy in the years to come.

Oliver Turner is Hallsworth Research Fellow at the University of Manchester, UK. He is the author of American Images of China: Identity, Power, Policy (Routledge, 2014) and numerous academic articles, book chapters and opinion pieces on U.S. politics and foreign policy. Chengxin Pan is senior lecturer in International Relations at Deakin University, Australia. He is the author of Knowledge, Desire and Power in Global Politics: Western Representations of China’s Rise (Edward Elgar, 2012) and a co-editor (with David Walker) of Australia and China: Challenges and Ideas in Cross-Cultural Engagement (China Social Sciences Press, 2015).