How North Korea Could Start the Unthinkable: War Between America and China 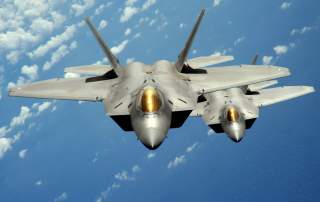 Robert Farley, a frequent contributor to TNI, is author of The Battleship Book. He serves as an senior lecturer at the Patterson School of Diplomacy and International Commerce at the University of Kentucky.

Image: Two U.S. Air Force F-22 Raptor stealth jet fighters fly near Andersen Air Force Base in this handout photo dated August 4, 2010. China is still years away from being able to field a stealth aircraft, despite the disclosure of images indicating that it appears to have a working prototype, Pentagon officials said on Wednesday. A U.S. intelligence official estimated in May that the J-20 could rival the F-22 Raptor within eight years. The Raptor is the premier U.S. fighter, with cutting-edge "fifth-generation" features, including shapes, materials and propulsion systems designed to make it appear as small as a swallow on enemy radar screens. REUTERS/U.S. Air Force/Master Sgt. Kevin J. Gruenwald/Handout​