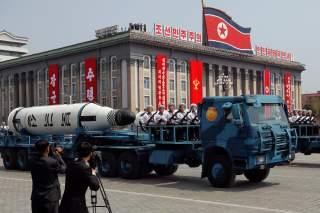 If the United States and North Korea went to war, what kinds of targets would Pyongyang want to strike with its nuclear arsenal?

While the idea of a full-blown nuclear war on the Korean peninsula is disquieting, the fact is—given President Donald Trump’s recent tweets—such a conflict might not simply be theoretical exercise.

In August, the Washington Post—citing Defense Intelligence Agency (DIA) analyses—suggested that North Korea has 60 nuclear warheads in his arsenal. However, if one were to assume that the DIA has grossly overestimated the size of Pyongyang’s arsenal and assume the Kim regime possesses only 30 nuclear warheads, that is still a sizeable force.

Let’s also further assume that Pyongyang understands that any U.S. military intervention on North Korean peninsula also means that it is game over for the Kim regime, thus Kim Jong-un has the option of either using his last line of defense, or simply be swept aside by American forces. Given that set of circumstances, the Kim regime would likely chose to use its nuclear weapons.

The best option for the Kim regime in such a scenario would be to reserve perhaps four warheads for a counter-value strike against the United States—assuming that Pyongyang possesses an operational intercontinental ballistic missile capability. Most of the remainder of the North Korean nuclear arsenal might be best used for counterforce strikes against major American, South Korean and Japanese military facilities and infrastructure. North Korean chemical and biological weapons—not to mention conventional artillery—likely provides enough counter-value capability to reserve the regime’s nuclear forces for counter-force usage.

In order to have even the slightest chance of survival, the North Koreans would have to prevent U.S. reinforcements from arriving on the peninsula. That means the largest naval and civilian port facilities and potential staging areas in Japan that might be used to reinforce allied forces on the Korean peninsula would have to be hit. The best way to assure that those facilities are rendered useless is to use nuclear weapons.

Among the targets that North Korea would likely hit are Kunsan and Pyeongtaek—both of which not only have large port facilities, but are also host to the majority of American airpower on the Korean peninsula. Other logical targets for a North Korean nuclear strike would be Incheon—where Gen. Douglas MacArthur landed during the first Korean War in September 1950—Busan, Ulsan, Masan, Mokpo, Pohang and Gwangyang. Those nine targets—many of which also house South Korean and U.S. naval forces—could be hit with two nuclear warheads a piece for the sake of redundancy.

Targets in Japan might include the greater Tokyo area where the Yukosuka naval base, Atsugi naval air station and Yokota air base are clustered. Additionally, the North Koreans might also target the Sasebo naval base and Iwakuni Marine Corps air station in southern Japan as well as Misawa air base in Northern Japan. Okinawa—host to Kadena air base and the Marine Corps station in Futenma—might also be a potential target. Out of the Japanese installations, Yukosuka is the most important as it is the homeport for a huge U.S. navy presence which includes the carrier USS Ronald Reagan (CVN-76). Knocking out that facility would seriously hamper U.S. operations around the Korean peninsula.

If the North Koreans have any left over nuclear weapons, it is possible that Kim Jong-un might reserve one bomb for Pyongyang itself. As U.S. and South Korean forces—though likely damaged badly from the North Korean nuclear onslaught—inevitably march north and enter Pyongyang, Kim could in a last act of vengeance launch his ICBMs towards the continental United States. Further, with the one bomb reserved for Pyongyang—as U.S. and allied forces enter the city—Kim could detonate that weapon, turning the metropolis into a nuclear funeral pyre that takes Kim’s enemies with him. With a regime like North Korea, it is not outside the realm of the possible.

The bottom line is that a nuclear war on the Korean peninsula would be devastating.