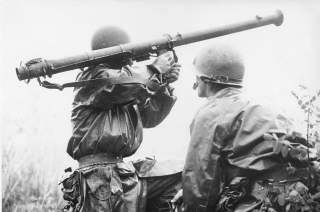 However, there are scenarios in which a relatively small U.S. advance force could get overwhelmed. For example, during the 1991 Gulf War, the Eighty-Second Airborne division was deployed to defend a thin defensive line across the open deserts of Saudi Arabia against a vast force of Iraqi armored units. Fortunately, the Iraqi tanks did not attack, but clearly the light infantry would have been hard pressed in such a scenario.

In 2016, analysts at the RAND Corporation projected that U.S. armored units forward deployed to eastern Europe would be overwhelmed in the event of a surprise invasion of the Baltics by Russia. However, such a scenario would depend on Russia concentrating many troops in the region without NATO noticing and mustering its own forces in reply; furthermore, it is generally unlikely.

Nonetheless, the experience of Task Force Smith emphasizes the terrible price paid by soldiers asked to fight unwinnable battles on short notice with inadequate equipment and too little training. Fortunately, despite the battle’s disastrous outcome, it was part of a series of desperate defensive actions that—just barely—prevented the conquest of all of South Korea until reinforcements could arrive.

Image:  A team mans a Bazooka at the Battle of Osan. Members of the 24th Infantry Division, first United States ground units to reach the front, go into action against North Korean forces at the village of Sojong-Ni, near Osan. At right is Private First Class Kenneth Shadrick, who was killed by enemy fire a few moments after this photo was made, thus becoming the first United States soldier to die in the Korean campaign.​Wikimedia Commons