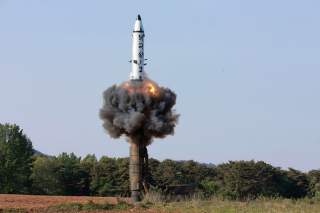 On November 4, a ballistic missile exploded above King Khalid Airport near Riyadh after being intercepted by Saudi Patriot missiles. The attack, launched by Houthi rebels in Yemen, led the Saudi government to blame Iran for supporting the rebels, escalating tensions across the Middle East.

Curiously, however, many of Yemen’s ballistic missiles came from North Korea—a design that North Korea, in turn, had acquired from Egypt.

The campaign of ballistic missile attacks has been raging since 2015 when Saudi forces, backed up by a coalition of Gulf states, invaded Yemen on behalf of the deposed government of President Hadi. The Yemeni Army’s sizeable ballistic-missile forces sided with the Houthi rebels.

While dozens of missiles aimed at Saudi Arabia proper have been intercepted by Patriot air-defense missiles, three missile strikes on Saudi coalition forces within Yemen or near its border, in 2015 and 2016, resulted in well over three hundred deaths and major losses in equipment.

Yemen’s ballistic-missile arsenal dates back to the long war between Saudi-backed North Yemen, and the Communist-aligned South Yemen—whose last president happened to be Ali Abdullah Saleh, an ally of the Houthi rebels. Ballistic missiles offered a way for the warring states to terrorize the civilian populations of their enemies without having to win the war by conventional military means.

But for precisely that reason—as well as their great complexity—long-range missiles are difficult to obtain from international sellers. Of course, states often find their own reasons for disregarding the risks of proliferating dangerous weapons; this is where our story takes us to Egypt and North Korea.

From the 1950s to the early 1970s, the Soviet Union was a major supporter of Egypt and Syria in their recurring wars with Israel. These conflicts allowed Soviet leaders to test the effectiveness of their military technology against Tel Aviv’s Western hardware. Among the vast arsenals transferred to the Arab states, which included 240-millimeter super-heavy mortars, PT-76 amphibious tanks, BMP-1 infantry fighting vehicles and MiG-21 jet fighters, the Soviets dispatched eighteen R-17 tactical ballistic missiles, known popularly as the Scud (their NATO codename), as well as nine mobile transporter-erector-launcher (TEL) units.

The Scud was first used in combat on October 22, 1973, literally in the final minutes of the Yom Kippur War, when Soviet technicians, disappointed to have missed their chance to employ the weapons, launched three missiles at Israeli positions on order from Moscow to test the weapons’ capabilities. The missiles’ two-thousand-pound warheads killed seven Israeli soldiers, and reportedly convinced Tel Aviv to avoid pursuing deeper strikes into Egypt. Though the Egyptians had not been consulted on the use of weapons that ostensibly belonged to them, President Sadat later took credit for the strike.

Nonetheless, the Yom Kippur War resulted in yet another Egyptian defeat, and Cairo eventually was persuaded to switch to Washington’s camp. This left Egypt with Scud missiles that the Soviet Union was unlikely to replace. Rather than giving up on its ballistic missiles, the Egyptian military shipped two of the R-17s off to North Korea, in an effort to replicate them.

The Soviets apparently had not been comfortable with the idea of handing over Scuds to North Korea. Though an ally, Pyongyang was prone to unpredictably escalating tensions with the West, much to Moscow’s annoyance. It was also known to play the Soviets against their Communist rivals in Beijing. Therefore, the missiles from Egypt were a technological breakthrough for North Korea.

North Korean engineers spent the next five years building up the infrastructure for a missile program and reverse-engineering the R-17Es. This finally resulted in North Korea’s first ballistic missile, the Hwasong-5 (“Mars-5”) in 1984. A revised version entered production in 1985 with slightly greater range than the R-17, able to hit targets up to two hundred miles away—enough to reach most targets in South Korea. Nonetheless, the type was similar enough in performance to the R-17, that it received the same NATO codename, the Scud-B.

The Hwasong-5’s accuracy—measured by Circular Error Probability—was poor: each shot is predicted to land within 450 meters of the target only half the time. Highly inaccurate weapons are of limited value against military targets, but can still serve as terror weapons of strategic value. This is especially true if chemical, biological or nuclear warheads are available.

A few years later, in 1989, North Korea developed the Hwasong-6, classed as a medium-range rather than tactical missile. The Hwasong-6 (or Scud-C) was even less accurate than the Hwasong-5, with a CEP of seven hundred to one thousand meters and a smaller 1,700-pound warhead. However, its 310-mile range finally gave Pyongyang the capability to hit targets in western Japan.

Back to the Middle East

North Korea built between six hundred and one thousand of these missiles, and shipped between one-third to one-half back to the Middle East. Recipients included Libya, Syria and Iran, the latter dubbing the missiles the Shahab (“Meteor”)-1 and -2; Hwasong-5s were used to bombard the MKO, a heavily armed Iranian rebel group. Syria and Iran also began manufacturing them domestically.

Pyongyang also paid back Cairo for their help by transferring technical data in the 1990s which Egypt used to develop its Project-T ballistic missiles. A separate Egyptian program to develop Condor missiles jointly with Iraq and Argentina had fallen through.

By this point, South Yemen had already received Scuds from the Soviet Union, and both North and South Yemen purchased the superior Tochka (SS-21 Scarab) and employed the weapons against each other. However, North and South Yemen reunified in the 1990s, and the new state aligned itself with the United States, so it was forced to look elsewhere to keep on growing its ballistic-missile force.

In 2002, the Spanish Navy boarded the North Korean cargo ship Sosan and found it was carrying fifteen Hwasong-5 missiles bound for Yemen. The shipment was eventually allowed to go through after protest from Sanaa, and it is estimated that Yemen received additional shipments of up to forty-five missiles, including Hwasong-6s. Therefore, the Hwasongs were very likely amongst the various Scud derivatives fired at Saudi and allied targets starting in 2015. The same report posits that longer-range strikes in Saudi territory were undertaken by Hwasong-6s; though unmodified, the missile does not have the range to have carried out attacks that took place on Riyadh or Mecca.

However, the Hwasongs and the Scuds are far from the only ballistic missiles being used by the Houthis. Tochka missiles likely inflicted more damage than the Scuds due to their greater precision. The Houthis also converted another Soviet weapon, dated S-75 surface-to-air missiles (SA-2 Guideline), into a ballistic missile known as the Qaher-1 and -2 with claimed ranges of 155 and 250 miles, respectively. By one count, the Houthis had around one hundred Scuds, sixty Tochkas and nearly a thousand eligible SA-2 missiles available to them in 2015.

More recently, the rebels have been launching missiles they claim to be domestic clones of Scuds, called the Burqan-1 and -2. These are believed to be modified Scuds with extended range. An analysis by Jane’s concluded that though it is possible these are derived from North Korean or Iranian technology, they are most likely local modifications.

Fortunately for Saudi civilians, Patriot missile defenses over the kingdom have been mostly successful at intercepting longer-range missile attacks. Saudi-allied ground forces in Yemen have not been quite so lucky—for example, short-range missile attacks in 2017 killed Yemeni Maj. Gen. Ahmed Saif Al-Yafei in February, and another twenty-two Yemeni soldiers based in Kofal in March.

However, one should bear in mind that deaths inflicted by ballistic missiles are dwarfed by the number of Yemeni civilians killed by Saudi air strikes using U.S.-built aircraft and smart bombs. Houthis missiles are indeed a threat to Saudi citizens, but they are killing fewer innocent lives in the region than F-15 Eagles and CBU-95 cluster bombs.

As for the North Korean missiles that spread all across the Middle East, hundred remain in service with the Korean People’s Army, though they have been superseded by more accurate and long-range types. The circumstances by which Soviet missiles given to Egypt became the foundation of the North Korean missile program—which is now capable of striking the United States—only for those same weapons to end up back in the Middle East is yet another example of how destructive technology can proliferate with unforeseen consequences.