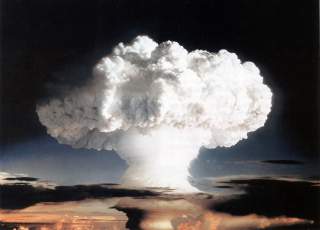 With tensions high between the United States and North Korea, there is the possibility that the U.S. would launch a “tactical” nuclear strike in the Korean peninsula. There would be consequences far beyond damage to military sites proposed in such an attack.

There is, of course, the danger that North Korea would retaliate and that tensions would escalate. That’s serious political fallout. As a physician scientist who has has worked with radiation for more than 30 years, I am also concerned about a cancer epidemic that would result from such an attack’s nuclear fallout.

Even without a nuclear war, the incidence of cancer is already rising around the world, up by 33 percent worldwide in the past decade. This is largely due to aging of the population and environmental and behavioral patterns such as cigarette smoking. The last thing we need is more of this dreadful disease.

In my research laboratory, we use extremely small doses of radiation to image very small molecules in order to understand how the body works. All of us who work with radiation know about the lethal effects of large doses, but the radiation exposure to the scientists in my laboratory is monitored very closely. Strict federal guidelines define how much radiation is considered “safe.”

During early morning walks in Seoul last year, while on sabbatical at Yonsei University, I could sense the city’s vulnerability as I heard target practice from the top of nearby hills. Seoul, with a population of 22 million, is a mere 35 miles from the North Korean border and would be affected by nuclear fallout. Indeed, it is a medical likelihood that cancer rates in Seoul and the Korean peninsula would be increased for decades following a nuclear attack.

Nuclear fallout occurs when the debris from a nuclear bomb explosion rises up in the familiar mushroom cloud into the atmosphere and is then dispersed by winds over a large area. Much of what we know scientifically about nuclear fallout comes from testing nuclear bombs in remote areas, such as the Marshall Islands in the Pacific in the 1950s, where high exposures resulted in increased in colon and stomach cancers. We have also learned about the effects of nuclear fallout from cancers that occurred years after the U.S. bombings of Hiroshima and Nagasaki and from cancers diagnosed after nuclear plant meltdowns at Chernobyl and Fukushima.

High doses of radiation can cause cancer by damaging DNA, the carrier of the genetic code. The damage to DNA caused by radiation is magnified in children because they are growing, and thus their DNA is dividing faster.

It takes years for most types of radiation-induced cancer to develop, and we might not know the full toll for decades. One long-term study found that about 5 percent of solid cancer cases were attributable to radiation. And for those people who were exposed to high doses of radiation (>1 gray, or about 1,000 chest x-rays), as much as 48 percent of solid tumors in survivors of Hiroshima and Nagasaki were attributable to radiation exposure.

Epidemiological data collected following the nuclear bombings of Hiroshima and Nagasaki have documented that over the past 70 years the incidence of both solid tumors and leukemias have been increased by about 10 percent among survivors.

One of the fallacies of tactical nuclear bombs is that they will be delivered such that they explode deep underground, limiting the nuclear fallout and its effects on humans. However, the best evidence suggests that the ability of these bombs to penetrate deeply below the surface is limited, and significant fallout will occur.

The tactical nuclear weapons that could be used for an attack on North Korea are up to 20 times the size of the bomb used in Hiroshima.

In Korea and surrounding areas subjected to the most intense nuclear fallout, the radiation dose to humans may well be higher than that experienced by the 200,000 or so Japanese living near the Fukushima nuclear plant which suffered an earthquake- and tsunami-induced meltdown in 2011.

US troops and citizens in South Korea vulnerable

Any nuclear strike will result in local contamination. However, it will be impossible to completely clean up the radiation from the soil and water in the region, as has been proven in Fukushima where radioactive soil is now contained in thousands of large plastic bagspiled high throughout the region. Our troops and more than 230,000 U.S. civilians who live in South Korea would be at risk.

Despite this attempt at decontamination by scraping the surface layer of contaminated soil and putting it into plastic bags, the ambient radiation exposure in the Fukushima region remains elevated above limits considered safe for laboratory workers here in the U.S.

Moreover, streams and rivers, and animals, including birds and insects, would ensure that the contaminating radiation is spread throughout the Korean peninsula and that food crops will be contaminated. All of this has happened in Fukushima, where the attempted decontamination continues to be a huge and enormously costly problem for the Japanese government.

I believe that these long-term health legacies must be considered along with overwhelming ethical concerns as part of the “downside” of a nuclear attack anywhere on the planet.

There are disputes about whether thousands or millions would die during a nuclear attack. What is indisputable is that any of the magnitudes of nuclear bomb explosions being considered will have long lasting effects on the health of the people living in North and South Korea and likely China and Japan as well.

This article originally appeared on the Conversation.