How One Man Invented the Conservative Movement 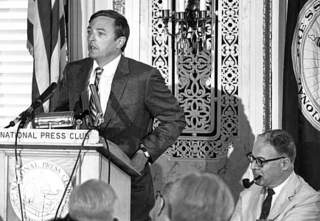 Is it really a decade since the passing of William F. Buckley Jr., who wrote more and debated more and mentored more than any other conservative in the 20th century?

Consider these accomplishments: author of over 50 best-selling books of nonfiction and fiction that introduced the CIA hero Blackford Oakes to the world; writer of 5,600 newspaper columns totaling 4.5 million words in eloquent defense of the conservative paradigm; host of the weekly TV program “Firing Line” that for 33 years and 1,504 programs enabled him to eviscerate the leading liberals in the land.

Buckley, who died on Feb. 27, 2008, let far more witty one-liners go than anyone since Oscar Wilde. Asked what he would do if he won the New York City mayoral election, he answered, “Demand a recount.” And debating a particularly pompous professor at Harvard, he remarked: “I would rather be governed by the first 2,000 names in the Boston telephone directory than the 2,000 members of the Harvard faculty.”

His most significant contribution to the conservative cause was the founding of the magazine National Review, which was far more than a magazine. It was the epicenter of something that did not exist until Bill Buckley and National Review came along—the modern American conservative movement.

Beginning in 1955, National Review provided a public platform for the champions of libertarian thought like Max Eastman and Frank Meyer, traditionalist ideas like Russell Kirk, and uncompromising anti-communism like Whittaker Chambers.

With Frank Meyer’s help, Buckley developed the idea of fusionism, a blending of the three major strains of conservatism, and persuaded conservatives to stop fighting each other and focus on the real enemies—Soviet communism abroad and overweening federal government at home.

Buckley took as his model the liberal New Republic. In a memorandum for investors, he called his new publication “a formative journal” that would “change the nation’s intellectual and political climate” just as the Nation and the New Republic helped usher in “the New Deal revolution.”

The time was right, he said, for a magazine—and a movement—that would oppose ever bigger government, expose eager social engineers, and challenge those who counseled coexistence with communism, intellectual conformity, the elimination of the market economy, and world government.

National Review was only the first political step by Buckley to build a movement. Next came the formation of Young Americans for Freedom that served as the ground troops for Arizona Sen. Barry Goldwater’s “glorious disaster” in the 1964 presidential election and Ronald Reagan’s capture of the presidency in 1980.

Buckley was also a founder of the Conservative Party of New York that nominated and helped elect James Buckley in 1970 to the Senate. Undoubtedly, his most audacious political act was to run in 1965 for mayor of New York City, the citadel of liberalism.

In that race, he threw down a conservative gauntlet to demonstrate that conservatism was not dead and buried, despite the overwhelming Goldwater defeat, but very much alive. He presented a conservative alternative to working-class Irish and other ethnic Catholics repelled by the ever more liberal policies of the liberal Democrats who dominated New York City politics.

On Election Day, an impressive 13.4 percent (341,226) of the electorate voted for Buckley. Political analyst Kevin Phillips, author of the landmark work, “The Emerging Republican Majority,” cited Buckley’s vote as a “harbinger” of the new majority that elected Richard Nixon in 1968.

The apogee of Buckley’s political efforts came in 1980 with the election of Reagan as the most conservative president in modern times. By his own admission, Reagan had learned much of his conservatism by reading National Review and forging a close friendship with its editor-turned-presidential adviser.

At a 1985 dinner celebrating the 30th anniversary of National Review, Reagan detailed the advances of freedom around the world—the fall of the Berlin Wall was only four years away—and the material role of American conservatism.

He singled out National Review, saying that “we are gathered to celebrate 30 years of witty, civilized pages from our beloved National Review and the damage, the terminal damages, these pages have done to modern statism and its unrelenting grimness.” The president saluted Buckley, “our clipboard-bearing Galahad … for setting loose so much good in the world.”

There were still miles to go for Buckley—books to write, liberals to toy with, and young conservatives to inspire—but he had accomplished what he had set out to do: found a formative journal and a movement that would move America to the right and for the better.

By reason of his wealth and social status, Buckley could have been the playboy of the Western world, but he chose instead to be the St. Paul of the conservative movement, offering his vision of ordered liberty and guiding American conservatism from a small suite of offices on Manhattan’s East Side to the Oval Office of the White House, from a set of “irritable mental gestures” mocked by liberals to a potent force that transformed American politics.