How to Push Back Against China in the South China Sea 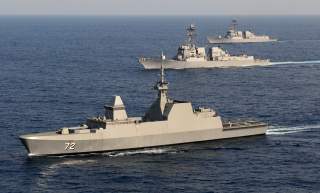 We were in Washington recently for the latest annual track-2 ‘Quad Plus’ dialogue. The meeting brings together participants from think tanks in Australia, India, Japan and the United States, as well as invited “plus” nations—this year we had representatives from Singapore. (Reflections on previous meetings are here and here.)

This round of talks comes at an important time, with the Quad democracies (and in fact many democracies around the world) facing a series of difficult challenges. In the 12 months since the previous meeting we’ve seen Russia consolidate its position in Crimea and eastern Ukraine through clever use of deniable ‘grey zone’ warfare. And China now has a series of fortified outposts in the South China Sea (SCS), having summarily dismissed the legitimacy of last year’s Arbitral Tribunal finding against it. As well, many democracies are facing internal electoral insurgencies that consume bandwidth and distract from global issues.

Because of our shared values and similar political institutions, it’s easy to find common ground with our colleagues from the other Quad countries—despite the fact that we all have our own parochial issues and security challenges. So the question becomes how to harmonise our efforts to address the common challenges.

One of the most intriguing ideas floated in this year’s meeting came from the US side in a fine paper on South China Sea issues by Professor James Kraska from the US Naval War College. He proposes a three-pronged response to China’s unilateral activities in the SCS. Two of the points are familiar to us: supporting and supplementing American Freedom of Navigation Operations (FONOPS) and leveraging the legal high ground provided by the 2016 Arbitral Tribunal ruling on China’s claims.

Consistent with those two approaches, Kraska argues that other countries (including the other Quad countries) should conduct FONOPS to reinforce the internationally established laws of the sea. The logic is that because FONOPS generate—or at least help sustain—public goods, the burden should be shared between the nations that benefit from those goods. And making sure that any FONOPS conform to the findings of the PCA ruling would help to underpin the rule of law that we collectively seek to preserve.

While there’s no doubt that the Tribunal ruling can and should feature prominently in our diplomatic representations on the SCS, FONOPS will likely remain a contentious option for Australia and others. But we were most intrigued by Kraska’s third idea: the use of lawfulcountermeasures. Countermeasures, in this sense, are actions to impose a cost on states that interfere with other’s rights under international law. In order to qualify as lawful, acts must be proportionate, not disadvantage innocent third parties, and conform with broader international norms, such as respect for human rights.

In the SCS, China is restricting the rights of other nations conferred by UNCLOS—specifically, the right to innocent passage in territorial seas and passage without restriction in an EEZ. At the moment, it does so without incurring any costs beyond diplomatic protests. A lawful response by other states could take the form of imposing similar restrictions on Chinese vessels and aircraft in their EEZ and territorial waters. In practice, that would mean physically shadowing Chinese platforms and asking them to leave. To be clear, we’re talking about searchlights and loudspeakers, not shots across the bow.

We like this idea for a number of reasons. First, it imposes a symmetry on the situation that’s lacking at the moment. Second, it doesn’t increase tensions in the vicinity of third party territories and claims. But the most compelling reason is that it reverses the asymmetry of interests that bedevils the cost–benefit calculus of FONOPS within Chinese-claimed waters.

Rightly or wrongly, China has convinced itself that the SCS is a core interest, and has been increasingly assertive in defence of that interest. The strength of feeling that has been engendered within Chinese society would make it very hard for its government to cede ground now. FONOPS help to delegitimise any legal claim that China has to the waters around occupied features, but since the Tribunal decision, we know that the legal niceties are of secondary importance to China. Deliberations about FONOPS have to factor in the potential of an aggressive Chinese response, and subsequent escalation risks. It’s possible that a FONOP would have to be abandoned for reasons of safety or prudence, but such a back down would seriously undermine the point trying to be made.

Many of those concerns don’t apply in the case of Chinese vessels being challenged in other nation’s waters. The asymmetry of territorial interest would be reversed, adding to the credibility of resistance. And the potential for escalation would be much more in the hands of the country employing the countermeasure. It would be a clear assertion of the rights that we value, but with considerably lower risk than FONOPS in Chinese-claimed waters.

There’s nothing about legal countermeasures that restricts their application to the Quad countries. In principle, it’s a strategy that any country could implement. But the Quad countries are well placed to pursue the strategy by virtue of their naval and maritime air capabilities. Individually it would be a useful form of signalling; collectively it could be very powerful indeed. It’s an idea worth thinking about—and worth recalling the next time the debate about FONOPS rears its head.