How Putin Made Russia’s Military Into a Modern, Lethal Fighting Force 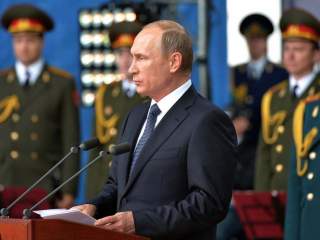 The 2014 annexation of the Crimea and subsequent “stealth invasion” of eastern Ukraine by the Russian Federation, as well as Moscow’s commitment to Basher al-Assad’s regime in Syria, are indicative of a sweeping wave of assertiveness in Russian foreign and strategic policy. Over the past half-decade, President Vladimir Putin has overseen the modernization and restructuring of Russia’s armed forces, providing a shot in the arm to both capabilities and confidence. But western analysts judged that Russian military reform had produced only a paper tiger, or that the reforms themselves had failed entirely.

Such ill-considered criticism of Russian military reform is concerning. However flawed, the force modernization and restructuring program launched by Vladimir Putin and his then Defense Minister Anatoliy Serdyukov in the wake of the 2008 Georgian War has strengthened the capabilities of the Russian military, at a time that the defense forces of many major NATO and allied nations have faced budget cuts and downsizing. The Russian military is now better equipped and more capable of conducting modern combat operations than at any point since the fall of the Soviet Union, which has caught analysts in the West by surprise.

To be sure, some criticism is warranted; a supercarrier program without the necessary shipyards and support facilities to construct and maintain them, a new build of Tu-160M2 strategic bombers and over 2,000 T-14 Armata main battle tanks appear unrealistic. Personnel wise, the introduction of more contract servicemen and professional non-commissioned officers could be more problematic than originally predicted. With drastically reduced oil and gas prices, it may be that Russia can’t afford further major reform.

At the same time, despite a recent upward drift in defense spending by some members, most of the past decade has seen many NATO nations downsize their armed forces and divest of capabilities. It’s a downward trend that is only just beginning to be corrected—the Netherland’s retirement, and subsequent reintroduction, of its main battle tank capability is a prime example. Moscow’s assertiveness in the “near abroad” and Syria has prompted a re-evaluation of not only NATO’s capabilities, but also of Russia’s.

Russian naval activity–especially in the Northern Fleet submarine force–is at its highest levels since 1991, prompting the United States to redevelop its facilities at Keflavik in Iceland to support the new P-8A Poseidon. Large scale, Soviet-style snap exercises (‘SNAPEX’), such as those in the Southern Military District (SMD) two weeks ago, have been reintroduced by Defense Minister Sergei Shorgyu as indicators of force readiness. Strategic bomber patrols have grown in frequency and range. The actions of the “little green men” in the Crimea points to the increasing effectiveness of Russia’s special forces, and a considerable joint force operation in Syria—capable of “seeing, shooting and supplying” on land, at sea and in the air—is evidence of Russia’s matured joint warfare capabilities.

Geography dictates that Russian military reform wouldn’t ordinarily be a concern to those who shape Australian security policy. But Russia is still a strong player in the Asia-Pacific; large scale military exercises between the Russian and Chinese militaries and cooperation in the cyber domain, more frequent strategic bomber patrols off Guam and even the U.S. West Coast, and the transit of Russian warships along Australia’s eastern seaboard during the 2014 G20 Summit testify to this. Further, the announcement in January that Russia had shipped unspecified weaponry to the Fijian military shows that its strategic presence in the South Pacific is growing.

Putin’s intervention in Syria is an example of conflicting Australian and Russian strategic interests, where Australian policy makers and military leaders must take into account Russian intentions and capabilities. The Royal Australian Air Force is flying combat operations in a theater shared with not only Russia’s most modern and capable combat aircraft–the Su-35 and Su-34-but also possibly its S-400 Triumpf air defense system. This crossing of Australian and Russian paths in the Middle East should be a powerful reminder that the impact of Russian military reform can be felt in Australian defense planning.

The government’s Defence White Paper should wholly consider the impact of Russian military reform, capabilities and presence in the Pacific. It should also reflect on Russia’s intervention in Syria and the impact of Moscow’s moves on the development of Australian defense policy and strategy.

Mitchell Yates is a postgraduate research student at Western Sydney University. This article first appeared in the Strategist.