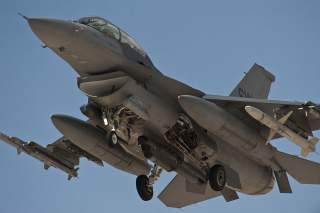 Raytheon has demonstrated that a new version of its AN/ALR-69A radar warning receiver that can geo-locate threat radar emitters with only one aircraft.

The new system would afford allied fourth-generation tactical aircraft such as the Lockheed Martin F-16 Fighting Falcon the ability to precisely target a ground-based enemy radar—such as targeting radar for a Russian-made S-300 battery. Previously, aircraft had to rely on approximations of where a threat signal was coming from.

According to Raytheon, a version of the system is already installed on the U.S. Air Force’s C-130H and the KC-46A tanker and it is currently being tested onboard the F-16. But Raytheon says that the ALR-69A is compatible with virtually any airborne platform.

The key to the ALR-69A(V)’s  performance is its open-architecture design and reliance on readily upgradable commercial hardware. Moreover, performance can be tweaked via software upgrades. Indeed, the system’s new geo-location capability is not the result of any hardware changes—only new software was added. “Without any hardware modifications, the ALR-69A(V) can now offer aircrews more options with its single-ship geolocation capability, a first for any RWR,” reads a company statement.

The system is able to provide 360-degree coverage with its four wideband digital channelized receivers. Each receiver is able to provide high signal selectivity and high sensitivity in dense electronic environments. “The combination of narrow receiver channels and a large number of channels provides the selectivity needed for high sensitivity and management of interference while ensuring rapid coverage of the threat spectrum and rapid response time,” Raytheon states. “The result is unparalleled radio frequency compatibility, improved detection range and accurate, unambiguous identification of friend versus foe in dense signal environments.”

The system can also be easily adapted for almost any aircraft due to its design.

“The design of Raytheon’s ALR-69A(V) allows cross-platform commonality, improved spectral and spatial coverage and easy integration with other ECM or radar systems. The ALR-69A(V) design relies on many commercial off-the-shelf components, allowing for ready expansion or upgrade,” reads Raytheon’s description of the system. “The 16-channel broadband receiver can easily be reconfigured to support future applications, and as converter technology continues to improve, users can boost response time and dynamic range by simply replacing a digital circuit card. Extra, pre-wired card slots enable interfaces to any electronic countermeasure or radar system.”

The new development could not come at a more opportune time for the Pentagon as Russia and China continue to develop evermore-capable air defense systems such as the S-400 and HQ-9. The powerful long-range weapons—which are highly mobile—have proven to be a vexing problem for the Pentagon, which—particularly the U.S. Air Force—has become convinced that the only solution to defeating such systems is stealth.