How Russia and China Could 'Sink' the U.S. Navy 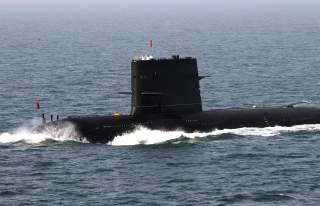 While a resurgent Russian and growing Chinese submarine fleet poses a challenge for the United States Navy, the service’s carriers and naval aviation forces are well prepared to meet the threat.

“The capabilities in the MH-60 Romeo are pretty impressive in the ASW arena,” Rear Adm. (Upper Half) DeWolfe Miller, the Navy’s director of air warfare told The National Interest during an interview at the Pentagon on August 23. “The other thing I’ll tell you is that we’ve gone from P-3s to P-8s and we have added a persistent nature to it with Triton that’ll IOC [initial operational capability] in ’18.”

The Navy’s aircrews will have to learn how to use all of their new hardware, but the capability afforded by the new platforms should greatly enhance the service’s ASW capabilities. Moreover, unlike during previous eras, individual ASW platforms would not be working by themselves. The real boost in capability comes from when aircraft such as the MH-60R, P-8A and Triton work in concert to hunt enemy submarines.

“I think as far as improvements go, MH-60R working with a Triton and combined with the capabilities of a P-8—and then I don’t want to speak for the undersea capabilities of our own submarines—but ASW is certainly one of our primary mission areas,” Miller said. “We take it quite seriously.”

Miller did not directly address if the resurgent submarine threat—which had largely been dormant since the end of the Cold War—would necessitate the development of a new fixed-wing carrier-based ASW platform as prominent naval analysts Jerry Hendrix at Center for a New American Security and Bryan McGrath, managing director of the FerryBridge Group, have suggested. However, the implication of Miller’s answer to the question suggests that the Navy is satisfied with its existing airborne ASW capabilities even if Navy leadership has voiced concerns about a shortfall in the number of attack submarines in the fleet.

One reason the Navy might not be as concerned with having a fixed-wing carrier-based ASW platform could be because despite the alarm over the recent resurgence in Russian submarine activity, the threat is far diminished from even the last stages of the Cold War. The Soviet Union boasted a submarine fleet of roughly 250 boats in 1991 just before it collapsed, but the combined might of the Russian and Chinese undersea forces total roughly half that number. Moreover, only a handful of those vessels are very sophisticated machines that could compete with U.S. Navy submarines.