How Russia, China or Even North Korea Hopes to Crush America's Military 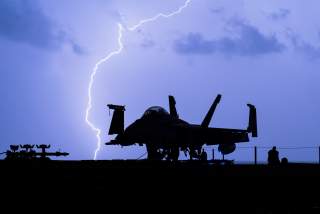 Since the days of the Gulf War debut of a host of new precision weaponry and communications technology, the US military has increasing developed GPS-dependent drones, satellites, force tracking systems and a wide range of weapons.

While such things, such as Air Force Joint Direct Attack Munitions for the Air Force, or the Army’s GPS-enabled Blue Force Tracking succeeded in ushering in a new generation of advanced combat operations – in more recent
years potential adversaries have become adept at closing the technical gap with the US. As part of this, the margin of US military technological superiority is challenged, matched and, in some cases, outdone.

Accordingly, there is a broad consensus among military developers and industry innovators that far too many necessary combat technologies are reliant upon GPS systems. Weapons targeting, ship navigation and even small handheld solider force-tracking systems all rely upon GPS signals to operate.

​As a result there is increased focus within the military community on combat technologies that can provide what the military calls precision, navigation and timing (PNT) for a wide range of systems.

The Air Force Research Laboratory (AFRL) is working with industry to test and refine an emerging radio frequency force-tracking technology able to identify ground forces’ location without needing to rely upon GPS.

“By receiving and processing various radio frequency sources not designed for navigation purposes, the new system connects to a smartphone and is designed to pinpoint a user’s location without relying on GPS,” Smearcheck said.

The concept, a combined effort between the AFRL and Virginia based Echo Ridge, is to identify and develop position, navigation and timing technologies able to operate in a GPS-denied environment wherein commonly relied upon GPS signals are jammed, attacked or compromised.

In particular, China is known to be testing high tech ASAT, or anti-satellite, weapons intended to knock out or destroy enemy GPS systems.

As a result of this and other threats, the Air Force has been vigorously pursuing resilient, cyber hardened, combat capable communications technology to sustain combat operations and preserve force networking without GPS.

The device connects to a smartphone running the Android Tactical Assault Kit, a device typically carried by Air Force ground operators to display the navigation solution on a map.

With the process developed by Echo Ridge, the errors do not accumulate over time, as they might with a traditional dead reckoning approach, so a valid position can be produced indefinitely, officials explained.

“We’re measuring signals that have known or discovered geographical locations,” said John Carlson, chief technical officer at Echo Ridge. “Because we’re able to precisely measure those signals, we can accurately estimate position without error growth over time or distance traveled.”

Several months ago, Echo Ridge and the AFRL Sensors Directorate completed a field test and demonstration of the technology at Fort Bragg, North Carolina.

Developers are now working on improving ruggedness for the device to expand the mission scope of its potential combat uses.

Industry developers are also working with the Army to develop navigation technologies able to function in a GPS-denied environment – combat scenarios where satellite signals are compromised or unable to function due to enemy activity or technical malfunctions.

One promising PNT technology under development is an Orolia-developed device called Versa PNT.

“You may not be aware of how susceptible GPS signals are to jamming or spoofing. The whole issue of interference, detection and mitigation is the focus of our technology,” said Mark Cianciolo, regional vice president for the Americas, Orolia.

The technology comes in a ruggedized box designed to mount on vehicles, drones and other mobile platforms that network combat forces. The device uses encrypted RF signals to both detect and mitigate potential jamming or interference – all while providing key navigation and timing systems for mounted and dismounted units. The Army’s mobile Blue-Force Tracker, for example, is a GPS-reliant system, which provides friendly and enemy force-tracking technology

Orolia is currently working on a prototype Versa for dismounted soldiers, Cianciolo said.

It functions like a Wave Relay (Persistent Systems technology) network with each device able to both transmit and function as a router or node. It uses an iridium receiver and inertial measurement technology to provide guidance, navigation and timing, Cianciolo said. The receiver is a small antenna, which receives RF frequencies. This kind of Wave Relay networking is also being successfully developed by the Army for subterranean combat, allowing soldiers to conduct combat operations underground.

“When you look at our solution in an environment where the timing is jammed, we’ve built in several redundant critical timing solutions,” he added. “Our new Versa product is the only fully integrated flexible platform of its kind that delivers comprehensive PNT solutions. The signal is fully encrypted.”

These networks, currently used by Army soldiers to connect the handheld Rifleman Radio, operate in an environment without a fixed infrastructure such as a cell tower or satellite network.

Rifleman Radio, used by Army Rangers in Afghanistan in recent years, uses the high-bandwidth Soldier Radio Waveform to transmit info across the force. A software programmable network is based upon the premise that each node or radio on the system functions as a router as well as something which transmits.

Versa PNT is also designed in a small, four-and-a-half inch form factor to ultimately enable use with dismounted soldiers as well as vehicles, drones or other platforms.