How Russia's Edge in Electronic Warfare Could 'Ground' the U.S. Air Force 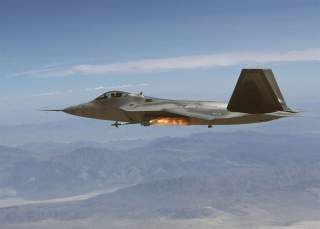 Russian electronic-warfare powerhouse KRET—Concern Radio-Electronic Technologies—has started testing a powerful new ground-based jamming system that could cut the crucial data-links that enable the United States military to conduct operations around the world. The system is designed to be used in conjunction with advanced Russian-built air defense systems like the S-300V4 and S-400 to disrupt air operations.

According to a company source—who spoke to the Moscow-based TASS news agency— the system consists of multiple separate jamming modules that are capable of attacking a command and control system at extended ranges using complex digital signals. The system is also capable of attacking multiple types of systems simultaneously. “Multichannel stations that ensure simultaneous inhibition of various avionics systems have been created,” the Russian defense industry source told TASS.

The new system—the designation of which TASS did not report—is designed to be seamlessly integrated with air defense systems. “It conducts real-time automated exchange of data on the actions of the aerospace grouping for purposes of centralized target assignment,” the source told TASS.

The new Russian electronic warfare system is also designed to be highly resilient—featuring multiple dispersed nodes. “Their energy, frequency and intellectual resources are distributed in an optimal way. In addition, all the modules are equipped with individual defense sets because they are the prime targets for enemy’s attack,” KRET’s first deputy director general Igor Nasenkov told TASS.

The development is significant because U.S. air power is highly dependent upon networking. The Pentagon uses a host of networks including Link-16 to tie its forces together in real time. Moscow has watched American warfighting capabilities since the first Persian Gulf War and has learned lessons from those conflicts. Russia—which retains a very robust defense industry—has invested heavily in countering American advantages. “Russia knows how we roll,” U.S. Air Force Gen. Philip Breedlove, commander of U.S. European Command told the House Armed Services Committee on February 25. “They have invested a lot in electronic warfare because they know we are a connected and precise force and they need to disconnect us to make us imprecise.”

The United States will have to invest time and money to rebuild its electronic warfare capabilities. During his testimony, Breedlove admitted that the Pentagon had neglected electronic warfare during the past two decades—which has allowed the Kremlin to gain an advantage. That’s especially true of the U.S. Air Force, which divested most of its electronic warfare capability because of its single-minded devotion to stealth. The U.S. Navy, however, upgraded its airborne electronic attack force with the Boeing EA-18G Growler—but those new aircraft will rely on antiquated ALQ-99 jamming pods until the new Raytheon Next Generation Jammer becomes operational in 2021.

Recently, the Pentagon seems to be refocusing on electronic warfare. The vice-chairman of the Joint Chiefs of Staff is mulling the possibility of designating the electromagnetic spectrum as a warfighting domain—like the air, sea or land. “Spectrum operations are so important that we ought to look at declaring the electromagnetic spectrum a domain,” Maj. Gen. Sandra Finan, deputy CIO for C4 and information infrastructure, told an AFCEA conference on April 22, reports Breaking Defense. “We are going to be operating offensively and defensively across that domain...so I think that’s one of the most important things that we can see in the future.”