Why Saudi Arabia Just Bought One of America's Most Controversial Warships 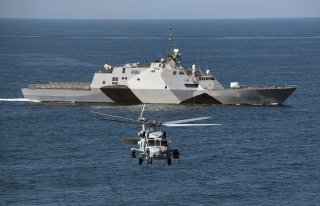 Lockheed Martin has taken the first steps in fulfilling a massive naval deal it reached with Saudi Arabia last year.

As first reported by the Motley Fool, the Pentagon awarded Lockheed $481.1 million for "long-lead-time material" to begin construction of four Multi-Mission Surface Combatant (MMSC) ships. The MMSC ships are modified versions of the Freedom-class Littoral Combat Ship (LCS), which Lockheed also makes. Last November, the Pentagon had awarded the company a $22.74 million contract to work out the modifications that Saudi Arabia had requested. The latest contract indicates that the design has been agreed upon.

The United States and Saudi Arabia have been negotiating a deal for the purchase of modern frigates from Washington since 2015. Ahead of President Donald J. Trump’s visit to Riyadh last year, reports emerged that the two countries had reached an agreement for the purchase of four modified Freedom-class LCSs for $6 billion. Along with the ships themselves, the $6 billion contract would cover support systems like training, spare parts and other logistical items.

The four LCSs are a main element of the Saudi Naval Enhancement Program II (SNEP II), an initiative Riyadh launched in 2008 to update its aging navy. As currently constructed, the Royal Saudi Navy is extremely underwhelming, with its most modern ships being modified French La Fayette–class frigates that were purchased in 2003. As The Drive has noted of the La Fayette–class frigates, “These 4,650-ton vessels have launchers for Exocet anti-ship and Aster 15 surface-to-air missiles, along with four torpedo tubes, a helicopter and a 76mm main gun. The design has limited stealthy features to help make it less visible to enemy radars.”

The MMSC ships Riyadh is purchasing from the United States should serve as direct replacements for Saudi Arabia’s French-supplied Al Madinah–class ships. Saudi Arabia has four of these ships, the first one of which was commissioned all the way back in 1985. The only other notable warships in the Saudi Navy are four Badr-class corvettes that Riyadh purchased from the United States in the early 1980s.

The new ships Saudi Arabia is purchasing will displace about 4,000 tons and have a crew size of between 100–130 sailors. The ships will be powered by two Rolls Royce Mt-30 gas turbines and two Colt-Pielstick diesel engines. As the Multi-Mission part of MMSC suggests, the Saudi Navy will use them for a variety of purposes, including anti-air, anti-ship and anti-submarine warfare (ASW).

To that end, each ship will have an eight-cell Mk-41 vertical launch system and a 4D air search radar, according to U.S. Naval Institute News. Saudi Arabia is also purchasing 532 Raytheon RIM-162 Evolved Sea Sparrow Missiles (ESSM). Each Mk41 cell can fit four ESSMs so each ship could theoretically be armed with sixty-four anti-air missiles. The LCS is often criticized for lacking sufficient air defense capabilities. Among the other weapon systems the ships will feature, again as reported by USNI News, are “eight RGM-84 Harpoon Block II anti-ship missiles (ASM), anti-submarine warfare (ASW) sonar suites, and torpedoes.”

Other reports have said that the Saudi version of the LCS will have Raytheon SeaRAM Anti-Ship Missile Defense System and 76mm main deck gun (instead of the 57mm deck gun found on the Freedom-class LCS). The Saudi variant reported slightly longer as well. But USNI News reports that the “primary difference between the Freedom-class and the Saudi-variant is the lack of modular mission space found in the U.S. version of the Littoral Combat Ship.”

“This acquisition will enhance the stability and maritime security in the sea areas around the Arabian Peninsula and support strategic objectives of the United States,” the United States said in a statement announcing the sale last year. “The proposed sale will provide Saudi Arabia with an increased ability to meet current and future maritime threats from enemy weapon systems. The Multi-Mission Surface Combatant ships will provide protection-in-depth for critical industrial infrastructure and for the sea lines of communication.”

The LCS has come under fierce criticism in the United States. As Sebastien Roblin summed it up for The National Interest:

The Littoral Combat Ships, come with a few minor flaws. They don’t have the firepower to hit anything more than a few miles away. They’re unlikely to survive being hit by anything in return. They cost more than twice as much as promised, and require 75 percent more crew to operate than planned for.

Still, they could make nice additions for the Saudi Navy, especially with their upgraded firepower. After all, the Persian Gulf is extremely shallow and thus the perfect operating environment for the LCS. Furthermore, Middle Eastern nations do not boast extremely capable navies like those in Asia, which should make the ships more survivable than their American counterparts operating in the Western Pacific. In any case, the Saudi MMSC’s will have much greater air defense capabilities.

Saudi Arabia doesn’t have a huge need for a navy—particularly with the U.S. Navy presence in the region—but the ships can be used to protect the Saudi coast and perhaps intercept Iranian resupplies to proxies like the Houthis in Yemen. They will also give Riyadh greater air defense capabilities to protect either critical infrastructure in Saudi Arabia or sea lines of communication.

This will be the first export of the LCS design, and the improvements Saudi Arabia is making to its variants could even be used by the U.S. Navy in future purchases.