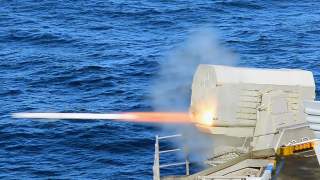 President-elect Trump must safeguard freedom of the sea forcefully and often. America’s incoming chief magistrate can start by reaching across the aisle and incorporating a passage modeled on John F. Kennedy’s 1961 inaugural into his inaugural address in January. Kennedy’s bracing language can be repurposed to counter China’s challenge to the liberal maritime order on which all trading nations’ prosperity hinges.

“Let every nation know, whether it wishes us well or ill, that we shall pay any price, bear any burden, meet any hardship, support any friend, oppose any foe,” to assure freedom of the sea. This much we pledge—and more.

To other seafaring peoples, we hope to welcome you into a fraternity of maritime liberty. We shall always hope to find you strongly supporting your own rights.

And we implore you to remember that, in the past, those who foolishly sought safety by riding the back of the tiger ended up inside. So it will be today in the China seas."

Trump should put steel behind unflinching words. Upholding freedom of the sea is about waging diplomacy toward influential audiences. What audiences? U.S. naval officialdom seems to think China’s navy is the principal audience for “freedom-of-navigation” demonstrations: a ship or plane does something that contravenes Beijing’s unlawful claims, Chinese mariners on scene see it, the point is made.

Not so. China’s navy is just a tool of Chinese statecraft. Influencing its views makes little difference. Shipborne diplomacy should mold opinion in Beijing, in allied countries such as Japan and Australia, and among vacillating friends—notably Duterte’s Philippines. Upholding freedom of the sea means discomfiting antagonists while heartening friends and allies.

To sway perceptions in America’s and liberty’s favor, the U.S. Navy must defy China’s lawlessness. It must do so regularly. And it must explain its actions—and why they matter—in the press. If a tree falls in the forest and no one hears it, it may as well not have fallen. No one hears it. Likewise, if American spokesmen don’t explain a freedom-of-navigation operation, it may as well not have happened. It will do precisely nothing to advance the cause of nautical liberty.

James Holmes is Professor of Strategy at the Naval War College. He is the coauthor of Red Star over the Pacific: China’s Rise and the Challenge to U.S. Maritime Strategy.

This commentary was first published on ChinaFile here.