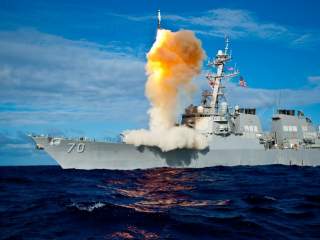 Until last month—when U. S. Defense Secretary Ashton Carter disclosed the closely held secret that the SM-6 is capable of engaging surface targets—most analysts believed that the U.S. Navy lacked any meaningful capability to attack enemy warships. With the revelation that the SM-6 does have anti-surface capability, it is now known that the U.S. Navy does have a long-range supersonic anti-ship missile at its disposal. This capability would be essential should any serious conflict arise with the Chinese or Russian navies, for example.

According to Raytheon, the recent test was a demonstration of the Navy’s “distributed lethality” concept where firepower is dispersed amongst a multitude of warships. It also showcased the SM-6’s expanded mission capabilities—which include anti-air warfare, sea-based terminal missile defense and anti-surface warfare.

The physical radar horizon for a S-band radar such as the Aegis SPY-1D is about 250 nautical miles for a target flying at about 30,000 feet. For target flying at lower altitudes, the radar detection range would be shorter—which is where the E-2D comes in. While the range for the SM-6 is classified, the weapon’s range could potentially be greater than 250 nautical miles.

Because the E-2D has the capability to track air and surface targets, the SM-6 would effectively allow U.S. warships to engage enemy surface combatants over-the-horizon with a Mach 3.5+ missile. While the SM-6’s warhead was designed to kill aircraft—and as such is relatively tiny—the fact that it also has ballistic missile defense capability suggests it has a hit-to-kill capability.

Given that modern warships are not the armored battlewagons from the battleship era, it is relatively easy to achieve a “mission kill” on a current-generation surface combatant. That means even with its small warhead, the SM-6 should be more than effective against, for example, a Russian Kirov-class battlecruiser or the Chinese Type 52D destroyer due to the warhead's speed. The kinetic energy from a very fast missile can do enormous damage by itself—as the recent test against USS Reuben James (FFG 57) amply demonstrated.

Thus far, Raytheon has delivered more than 250 SM-6 missiles, which became operational in 2013. Production will continue for the foreseeable future as the Navy begins to replace its older Standard missiles with the new weapon.