How to Solve the Ukraine Crisis: Peacekeepers? 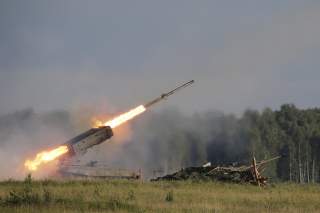 The Ukraine crisis continues to be the main source of tension in the NATO-Russia relationship according to the alliance’s top official. The alliance hopes to reduce tensions by working with Russia to implement the Minsk agreements and potentially deploy UN peacekeepers in the war-torn Donbas region.

“During the meeting today [with Russian foreign minister Sergei Lavrov] we addressed Ukraine and I underlined the importance of the implementation of the Minsk agreements,” NATO Secretary General Jens Stoltenberg told reporters at the Munich Security Conference on Feb. 17. “I also said that the situation in Ukraine is the main reason for the deterioration of the relationship between NATO and Russia and also the main reason why NATO has adopted its defensive posture in the eastern part of the Alliance.”

The issue of UN peacekeepers inside the Donbas region in Ukraine is a contentious one.

“Well I think it’s too early to say what kind of possible solution can be agreed or reached when it comes to UN presence in Ukraine, “ Stoltenberg said. “Since I discussed this, or since this proposal was put on the table many months ago, not much progress has been achieved; so it remains to be seen whether it’s possible. But I think it’s important to continue to work on different proposals to make sure that we try to have some progress on the implementation of the Minsk agreements.”

One potential approach—which as been proposed by U.S. special representative to Ukraine Kurt Volker—is where peacekeepers would be deployed in phases while Ukraine implements some of the measures it agreed to under the Minsk agreements.

“I met with Kurt Volker a couple of weeks ago and we discussed of course his efforts to try to make progress on the implementation of the Minsk agreements and then also different proposals including these proposals to have UN forces there,” Stoltenberg said. “A phased approach is one way of trying to reach an agreement. I have an open mind, I think we all should have an open mind to different ways to overcome the obstacles and then start to make progress.”

One of the sticking points between Russia and NATO is the scope of any potential UN mission and the composition of those forces.

“My message has been over long period of time that I think that peacekeepers must have the responsibility to not only be responsible for the OSCE [Organization for Security and Co-operation in Europe] monitors but be responsible for the whole region, including making the border between Russia and Ukraine a border which is accessible and which is part of what they then have the responsibility for,” Stoltenberg said. “We didn’t discuss which nations could participate in such UN force but it goes in a way without saying that UN force can include of course many other countries than NATO countries. And therefore I think to have UN force may be a way to see some progress on the implementation.”

Another sticking point is that Russia will not likely accept any NATO troops that might be part of a UN peacekeeping mission on its borders.

“NATO is 29 allies, the UN is the whole world and of course the UN force can be much broader than only NATO countries,” Stoltenberg said. “But first I think we have to make more progress of a whole concept of a UN force before we start to discuss exactly which nations are going to be part of a potential UN force.”

Any agreement, however—at least as far as the U.S. State Department is concerned—would require that Russia must make the first move to ease tensions. However, it is unclear is Secretary of State Rex Tillerson or anyone in his department truly speaks for the Trump Administration.

“It’s important to be clear about U.S. policy towards the conflict: Crimea is Ukraine. The Donbas is Ukraine. We will never accept trading one region of Ukraine for another. We will never make a deal about Ukraine without Ukraine,” John J. Sullivan, deputy secretary of state, said during a speech in at the Ministry of Foreign Affairs' Diplomatic Academy in Kiev on Feb. 21. “To advance these fundamental goals, Secretary Tillerson appointed Ambassador Kurt Volker as Special Representative for Ukraine Negotiations in July of last year. And his mandate is to break the deadlock with Russia over Ukraine. Secretary Tillerson has made it abundantly clear that Russia must take the first steps to de-escalate violence and resolve this conflict by fully implementing the Minsk Accords.”

Time will tell if any progress will be made in solving the Donbas situation.