How Soon Can Russia Finish Its New Stealth Bomber? 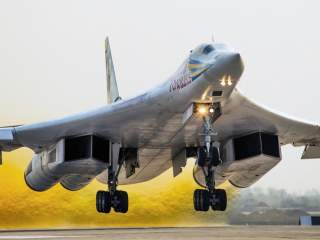 The first flight of Moscow’s new Tupolev PAK-DA stealth bomber has been delayed by about three years.

According to Russian officials, the new bomber is now not likely to fly before 2021. The aircraft was previously expected to take flight in 2019. “Work on the PAK DA is coming along and the pace is suiting us,” Russian Air Force chief Col. Gen. Viktor Bondarev told the state-owned Sputnik news service this week. “The challenge remains to raise the prototype into air by 2021, but if all continues at the current pace, it will take off even earlier.”

However, 2021 represents three-year delay. “The maiden flight should be performed in 2019. State tests and supplies will be completed in 2023,” Bondarev told RIA Novosti in May 2014. Under the previous plan, the bomber had been expected to become operational in 2025. However, that timeline was always optimistic. With the first flight delayed, the rest of the PAK-DA’s schedule is likely to shift to as well—with operational testing and operational capability being delayed by several years.

Not much is known about the PAK-DA. The PAK-DA is expected to be a subsonic flying-wing aircraft that is roughly analogous to the Northrop Grumman B-2 Spirit and the U.S. Air Force’s forthcoming Long Range Strike-Bomber. Flying wings lend themselves well to low observable characteristics—particularly against low frequency radars operating in the UHF and VHF bands—but manufacturing could still be an issue. The PAK-DA will likely feature advanced avionics—including a new radar, communications suite and electronic warfare systems. Meanwhile, the PAK-DA’s engines, which are being developed by the Kuznetsov design bureau, are an advanced derivative of the Tu-160’s NK-32 turbofans.

The PAK-DA will not be a small aircraft. It is expected to have a maximum gross take-off weight of about 250,000lbs—about the size of a Boeing 757 airliner. According to Russia & India Report, Russian Air Force’s requirements state that the bomber will have a range of 6,740 nautical miles. It will also be able to carry 60,000lbs of weapons. But those numbers can’t be independently verified.

The PAK-DA is a break from previous Russian and Soviet bombers, which have generally focused on using a combination of speed and long-range cruise missiles to deliver their payloads. The PAK-DA is the first Russian bomber optimized for stealth. However, previous comments from Russian defense officials suggest that the PAK-DA will serve as a launch platform for long-range nuclear and conventional cruise missiles and a host of precision-guided munitions. It might also eventually be armed with hypersonic missiles if previous statements from Russian officials hold true.

The PAK-DA will eventually replace the existing Soviet-era fleet of Tupolev Tu-22M Backfires, Tu-95 Bears and Tu-160 Blackjacks (pictured). The Russians have the technical capability to develop and build the PAK-DA, but exactly how Moscow will pay for the massive program during a time of economic distress is an open question.