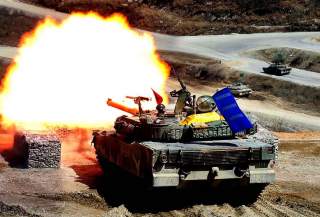 South Korea is assembling a strike force of ballistic missiles, cruise missiles, air power and marines to neutralize the North Korean threat. Designed to kill or incapacitate the country’s leadership—particularly Kim Jong-un—in the crisis before war, the so-called Kill Chain and Korea Massive Punishment and Retaliation (KMPR) plans are like something out of a military techno-thriller, with hundreds of precision-guided missiles and commandos engaged in a race against time to stop a nuclear attack. What are Kill Chain and KMPR, and could they work in heading off a nuclear war?

As a nonnuclear power, South Korea has limited options in dealing with North Korea’s nuclear-weapons program. Instead of building its own nuclear arsenal as a direct deterrent, Seoul is assembling its own arsenal of unique conventional capabilities, consisting of Global Hawk high-altitude surveillance drones, other intelligence/surveillance/reconnaissance assets, special operations forces, and cruise and ballistic missiles.

Typically, a surveillance asset like Global Hawk would likely be the first to detect preparations for nuclear attack. This might be a mass dispersal of North Korea’s mobile missile launchers, particularly those carrying the short-range KN-01 Toksa, Hwasong-6 and Hwasong-7; medium-range Nodong-1; and intermediate-range Hwasong-12 missiles. The presence of fuel-truck convoys to support liquid-fueled missiles would be another tipoff. A mass evacuation of North Korea’s elite from the cities, or their migration into shelters underneath Pyongyang, could be another sign. Alternately, it could be North Korea’s ballistic-missile submarines putting to sea, which for now amount to one experimental Gorae-class boat.

Once it becomes clear preparation for an attack are underway, the South Korean government will activate Kill Chain. Korean special forces, likely supported by U.S. special-operations aviation units in South Korea, would be flown into North Korea to reconnoiter suspected missile launch locations. These units could attack the missiles themselves heavy weapons or remain hidden and call in air and cruise-missile strikes.

The firepower behind Kill Chain is an ever-growing mixture of tactical aircraft, cruise missiles and ballistic missiles. The Republic of Korea Air Force has approximately sixty F-15K Slam Eagles, the best fighter on the Korean peninsula, which can fire AGM-84E SLAM–Expanded Response missiles. An advanced derivative of the AGM-84 Harpoon antiship missile, SLAM-ER would be used to take out mobile missiles and their support vehicles in the field. A range of 170 miles means the launching fighter can stay well clear of North Korea’s decrepit air defenses while still releasing its ordnance.

Another airborne weapon would be much more deadly to the North Korean command and control and the country’s leadership. South Korea purchased a total of 260 to 270 German-made Taurus cruise missiles, which the manufacturer will integrate into the F-15K aircraft. The Taurus is a subsonic cruise missile with a range of approximately 310 miles—launched from a F-15K orbiting Seoul, the missile can easily hit targets well north of Pyongyang. The missile’s Multi-Effect Penetrator Highly Sophisticated and Target Optimised warhead is capable of attacking bunkers and other hardened facilities underground. If any single missile kills Kim Jong-un, it will probably be a Taurus.

Other weapons in the Kill Chain arsenal include the Hyunmoo family of ballistic and cruise missiles. Hyunmoo (“Guardian of the Northern Sky”) 2B is a truck-mounted ballistic missile with a range of 310 miles and can hit most of North Korea. A new version, Hyunmoo 2C, will have a range long enough to hit any location in the northern half of the peninsula—and beyond. Ballistic missiles will probably be used against military and government buildings in Pyongyang and missile facilities across the country. The new Hyunmoo 3B cruise missile gives South Korea the ability to launch cruise missiles not reliant on the F-15K as a launch vehicle.

Once Kill Chain is initiated, hundreds of conventionally armed missiles and aircraft will streak north toward their targets, attempting to destroy North Korea’s mobile missiles, kill Kim Jong-un, or destroy his means of communicating with his nuclear forces in the field. It is an ambitious program, and one of the few offensive conventional deterrence plans to counter nuclear weapons known to exist.

A similar contingency plan, Korea Massive Punishment and Retaliation, would seek to destroy not only North Korea’s nuclear weapons, but the regime as well. KMPR is basically a modified version of Kill Chain but focused on eliminating the enemy leadership. In 2016, an unnamed South Korean official told Yonhap News, “Every Pyongyang district, particularly where the North Korean leadership is possibly hidden, will be completely destroyed by ballistic missiles and high-explosive shells as soon as the North shows any signs of using a nuclear weapon. In other words, the North's capital city will be reduced to ashes and removed from the map.”

Unlike Kill Chain, which involves only precision-guided missile strikes and a handful of special operations forces, KMPR actually involves a seemingly suicidal invasion of the north by three thousand Republic of Korea marines. The brigade-sized unit, dubbed “Spartan 3000,” is reportedly trained to “remove the North's wartime command and paralyze its function if war breaks out.” Given the centralized nature of the North Korean government, that sounds an awful lot like an amphibious raid on Pyongyang.

The big question is: would any of this work? Does South Korea have the intelligence, surveillance and reconnaissance assets—including possibly human intelligence assets—to detect the imminent use of nuclear weapons? Would it have sufficient time to calmly process the intelligence, correctly conclude an attack was or was not impending, and set either plan into motion? Either Kill Chain or KMPR will be the opening salvos of Korean War II, a war with no easily foreseeable conclusion, which could kill hundreds of thousands and leave both Koreas devastated for years. The pressure to decide correctly will be enormous.

South Korea could easily decide to “go nuclear” and develop nukes of its own. A second-strike capability ensconced in submarines and land-based silos, South Korea could then declare the North Korean nuclear problem solved—for itself anyway—and go about its business. Instead, the country has committed billions of dollars in precision-guided weaponry and thousands of its marines and special forces to what may be a suicidal attack on one of the most heavily defended countries on Earth. It’s an audacious, admirable and morally responsible way to counter the North Korean nuclear threat.