How to Stop the Sale of France's Mistrals to Russia: NATO Should Buy Them 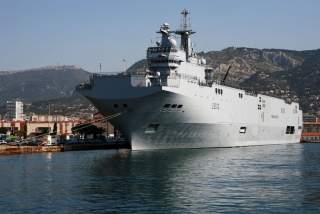 Fast forward to November 1st of this year, just four days before US mid-term elections.  The top news story begins, “Just weeks after crash investigators determined that the Malaysian Airliner was shot down in Ukraine by a missile supplied by Russia, France has today delivered an advanced warship that will markedly increase Russia’s ability to threaten Ukraine, Georgia and other vulnerable countries.”

Unfortunately, such an incredible scenario looks increasingly likely to materialize.  Cash-strapped France appears determined to go forward with its contracted sale of two Mistral class amphibious war ships to Russia.  If France delivers the first vessel, scheduled for just four months from now, this could mark a colossal foreign policy failure for the West.  Even if the other economic sanctions bite, the simple  act of a key NATO country conducting military business as usual with Russia will likely make a mockery of the attempt to fundamentally change Putin's decision calculus.

It is imperative that the Obama Administration put on a full-court press to stop this deal – and there’s a way to do it, provided officials are willing to think outside the box.  NATO should buy the ships from France for its own long-term needs in Europe and around the world, acquiring useful capabilities while also cushioning the financial hit to France--and giving Paris diplomatic cover for a difficult decision as well.

To achieve such an outcome, President Obama has to make clear – publicly – to Congress and to our European allies that stopping this sale is an urgent priority for the US.  The President himself needs to point out the risks.  The sale of the Mistral is not only a symbolic disaster, vindicating Putin’s view of a West that is weak, unprincipled and just as venal as his cronies in Russia, it also provides Moscow with a critical boost to its military capabilities.

Control of the coastal regions of the Baltic and Black Seas is a strategic priority for Moscow and the versatile amphibious assault ship, which can carry up to 16 attack helicopters, increases Russia’s ability to carry out offensive operations along the coast of Ukraine, neighboring Georgia and other countries, including in the Middle East, that have exposure to seafaring Russian vessels.  It could, for example, deploy more "little green men" of the type that moved into eastern Ukraine this spring, to various places quickly and semi-stealthily.  The sale will only complicate the effort to get Europe to follow the US lead in toughening sanctions on Russia as businesses cite – with reason – the blatant hypocrisy of asking them to take a substantial financial hit while a major European power closes its lucrative deal with Moscow.

Some in Congress, notably Congressman Engel of New York, have called for NATO to purchase the vessels instead.  That is a good idea but it needs to go further.  It should be coupled with financial contributions from all NATO members, in keeping with the usual algorithms by which NATO buys modest amounts of equipment for general alliance purposes.  In order to get the attention of allies, the Administration must be able to show that it is willing to consider partial financing of an alternative.

NATO already owns certain assets for the general utility of the alliance as a whole.  The list includes military infrastructure at some bases, and specialized equipment such as AWACS aircraft needed to control the integrated aerial operations of many countries in the event of a major operation.

Amphibious ships have not previously been seen as candidates for NATO-wide acquisition because, to date, the alliance has relied on the generosity of individual members for possess these kinds of vessels.  Such countries, notably the United States and Britain and France, have the requisite capabilities should they be willing to employ them. But at a time when most of NATO's European members are shirking from their duties within the alliance and letting military budgets fall precipitously, it may no longer be prudent or appropriate just to count on a small number of member states to provide such assets.  They could have many important uses. Whether for military exercises to shore up the security and confidence of the alliance's easternmost members, or for humanitarian purposes in Africa, or for counterterrorism purposes in the broader Middle East, it would make good sense for the alliance to have its own organic capabilities to move about several hundred tactically mobile and logistically self-sustainable personnel.

France would of course have to do at least its own part in this, paying for a share of the Mistrals itself (or, alternatively, offering them to the alliance at a considerable discount).  It is only right that Paris accept its fair share of the burden for a sale that was questionable from the start--and that, frankly, should have been unilaterally canceled by France by now in light of the tragedies of the last few weeks and months in Ukraine that have resulted from Russian belligerence.

But we are where we are. Paris will not take such an honorable step without substantial compensation and help, it would appear.  So now is the time for NATO as a whole to step up. Doing so, at this juncture, would accomplish more than simply avoiding a major strategic mistake.  It would turn a crisis into an opportunity for the alliance to show resolve and, at the same time, gain important capabilities for its future regional responsibilities.

Edward P. Joseph is Executive Director of the Institute of Current World Affairs​.

Michael O'Hanlon is a senior fellow with the Center for 21st Century Security and Intelligence and director of research for the Foreign Policy program at the Brookings Institution, where he specializes in U.S. defense strategy, the use of military force, and American foreign policy.