How Taiwan Is Planning to Stop an Invasion by China 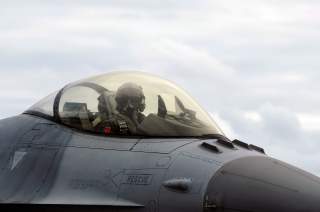 Taiwan’s military is scheduled to simulate defending the island from an invasion by mainland China.

The simulation will be part of Taiwan’s annual Han Kuang drills, which begin next week. Citing a statement by the Taiwanese Ministry of Defense, the Japan Times said that “Taiwan will simulate repelling an invading force, emergency repairs of a major air base and using civilian-operated drones as part of military exercises starting next week.” Although the exercise begins then, the Defense Ministry said that the main part of the drill will take place from June 4 to June 8. That part will consist of live-fire exercises practicing “enemy elimination on beaches.” The drills will also practice quickly repairing military air strips that would presumably be targeted by Chinese missile and aircraft early in a conflict.

The statement did not explicitly mention China, according the Japan Times. However, a Taiwanese spokesperson was more direct. “Simply put, the main goal of the drills is to make any Chinese communist military mission to invade Taiwan fail,” said Chen Chung-ch, a spokesperson for the Defense Ministry. Chen added that the exercise will take account of the current capabilities of the People’s Liberation Army (PLA), mainland China’s military. “It simulates this year’s situation and we are taking into consideration China’s air and naval movements in the region,” he said. Last year, the Han Kuang drills simulated a PLA attack in 2025, using “F-35 fighters as a parameter in its computerized war games to simulate combat tactics and strategies.”

Although Taiwan holds these drills every year, two things are different about the 2018 edition. First, the Taiwanese Ministry of Defense announced that “civilian resources will also be integrated into this exercise to support military operations” for the first time ever. For instance, civilian construction companies will help in the repair of military airstrips that are destroyed in China’s initial attack. Telecommunications companies in Taiwan will also assist in maintaining command and control. Taipei is also enlisting civilian drone companies to help with surveillance and targeting. “It’s not just soldiers’ duties to protect the country. Everyone has the responsibility since our defense budget is limited,” Chen, the Defense Ministry spokesperson, explained.

The other important development surrounding this year’s drills is mainland China has been ramping up military pressure against the island nation, which it considers a rogue province. As previously discussed, the last year and a half or so has seen Beijing repeatedly conducting provocative overflights of Taiwan. More recently, China conducted its largest military drill in recent memory in the South China Sea and Taiwan Strait.

These latest drills centered on China’s first aircraft carrier, Liaoning, and, according to news reports, included forty-eight warships, seventy-six planes and over 10,000 military personnel. PLA newspapers hailed the drills as “the biggest maritime military parade since the foundation of the new China and a heroic display of the PLA Navy in the new era.” Chinese president Xi Jinping presided over part of the drills in the South China Sea.

To underscore the message, Song Zhongping, a frequent military commentator in Chinese state media, said the drills were directed at intimidating Taiwan. “An aircraft carrier formation will play an important role in hypothetical future military operations against Taiwan," Song said. Noting that new drills were taking place east of Taiwan, Song added: “The east side of the island, where the Taiwan army elaborately deploys its forces, will not be safe when confronted with the formation of aircraft carriers of the mainland.”

At the same time, Chinese state media denounced Taiwan’s Han Kuang drills. Xu Guangyu, a retired major general of the People's Liberation Army, told China's Global Times that Tapei uses the drills to unite “Taiwan-independence forces." Xu added: “More importantly, Taiwan also wants to show its muscle to the mainland. But Taiwan's attempt to stack up against the mainland is like throwing an egg against a rock.”

Despite the growing tensions, the Taiwanese people do not seem overly concerned about the prospect of an armed confrontation. A new survey by the Taiwanese Public Opinion Foundation—which admittedly was taken before the recent Chinese drills—found that 64.5 percent of respondents do not believe China will invade Taiwan in the foreseeable future, compared to 25.7 percent who viewed that possibility as likely.

The poll also found that Taiwanese citizens have shockingly little faith in their military’s ability to fend off an invasion. According to a news article by Focus Taiwan, “The poll found that 65.4 percent of Taiwanese have no confidence in the country's defense against an attack by China, while 27.1 percent think Taiwan forces can repel any such invasion.” More respondents (47.4 percent) believe the United States will send troops to help defend Taiwan compared to those who view this as unlikely (41 percent).