How the A-4 Skyhawk Ruled the Skies 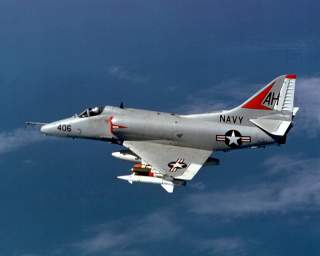 Modern jet fighters continue to grow ever more complicated and more fantastically expensive. But some of the most influential aircraft in history succeeded instead because they could do their job pretty well at a very reasonable cost. Such was the case of the agile A-4 Skyhawk, a small but heavy-lifting attack jet that would carve out a major place for itself in American history—and also that of Israel and Argentina.

In 1952, Douglas aviation engineer Ed Heinemann sought to create a replacement for the Navy’s AD1 Skyraider attack planes. He proposed to replace one of the largest single-engine fighter-bombers ever built with one of the smallest, lightest attack jets ever. At every turn, Heinemann engineered the Skyhawk to reduce weight and complexity, resulting in a combat jet that measured only twelve meters long and weighed only five tons empty. Even the delta wings on the “Tinkertoy Jet” were so small—little over eight meters from one wingtip to wingtip—that they did not need to fold for stowage inside a carrier. This featured, combined with short-takeoff-and-landing performance, made the Skyhawk particularly useful when it entered service in 1956, as the Navy still operated numerous smaller conventionally powered carriers with limited deck space.

Powered by a single J65 turbojet engine with two side-mounted air intakes, the Skyhawk proved agile but not especially fast, with a maximum speed of around 670 miles per hour—just below the speed of sound. The early-model Skyhawks lacked a radar for detecting and engaging enemy fighters, but at short range could employ heat-seeking Sidewinder missiles and two twenty-millimeter cannons for self-defense. But that was just as well: the Skyhawk’s job was to pound enemy ground targets, and its three hardpoints could lug a hefty maximum bombload of eight to ten thousand pounds, which could include nuclear weapons.

The Skyhawk was cheap, reliable and effective, so the Navy and Marines ordered hundreds of them, with production eventually totaling at 2,500 in a wide variety of models. In the early 1960s, every U.S. Navy carrier had at least two attack squadrons of Skyhawks; the first nuclear supercarrier had four. The Skyhawk was swiftly improved in the A-4B variant with improved avionics and the capability for air-to-air refueling—not just with tanker aircraft, but even from one Skyhawk to another. Though the technique eventually fell out of favor as dedicated tankers became available, the tankers were retired at the turn of the century, and so fighter-to-fighter refueling was recently brought back in the Navy’s Super Hornet fighters. The radar-equipped A-4C followed, giving the aircraft bad-weather and night-flying capability.

First and Last in the Fight for Vietnam

On August 2, 1964, the destroyer USS Maddox fought a skirmish with North Vietnamese torpedo boats in the Gulf of Tonkin off Vietnam. Two days later, shipboard radar seemed to detect a second attack. In fact, the second attack was later revealed to be a technical glitch—a glitch with historic consequences, as President Johnson promptly ordered the first American air strike of North Vietnam, targeting the boat bases and an oil depot in Vinh. Of course, the Navy dispatched its Skyhawks to do the job, and they dropped the first of what would be more than 7.6 million tons of U.S. bombs in Vietnam.

These days, U.S. warplanes mostly attack their targets from high altitude using precision-guided weapons, to avoid having to swoop down within range of machine guns and shoulder-fired missiles. But guided air-to-ground weapons were in their infancy in the age of the Skyhawk. Instead, attack planes hit enemy targets by swooping down upon them and releasing old-fashioned gravity bombs above the target, or strafing the target with cannon fire. Getting that close necessarily put in in within reach of abundant and inexpensive automatic flak cannons, which could be quite effective.

In the initial strikes at Vinh, flak shot down two A-4s, killing Lt. Richard Sather, while Lieutenant Junior Grade Everett Alvarez Jr. managed to eject from his plane—and became the first of hundreds of American pilots to endure years of captivity and torture in North Vietnam. Another participant in the initial raid, future Vice Admiral James Stockdale, who in 1992 ran for the vice presidency alongside Ross Perot, was shot down and captured a year later in 1965.

The Skyhawk remained the workhorse of the Navy as Washington escalated its involvement in Vietnam, flying thousands of ground attack sorties and participating in key engagements such as the Battles of Hue and An Loc. New marks of the Skyhawk also showed up: the A-4E and F boasted two additional hardpoints for carrying weapons, more powerful J52 engines, a doppler navigation radar and a targeting computer. The F model in particular also introduced a pronounced “hump” behind the cockpit, packed full of avionics. The Skyhawk also began to use greater quantities of guided weapons, including AGM-12 Bullpup missiles and AGM-45 Shrike antiradar missiles for knocking out Hanoi’s surface-to-air missile defenses.

Though introduction of A-7 Corsairs gradually supplanted the A-4 complement on larger carriers, the Skyhawk’s shorter takeoff and landing distance guaranteed its continued service on smaller carriers as well as in Marine aviation units, which deployed the A-4s to forward air bases.

Earlier in the war, A-4s even bumped into North Vietnamese MiG-17s, highly maneuverable cannon-armed fighters that were only slightly faster than the Skyhawk. In a clash on April 1967, a MiG-17 dispatched a Skyhawk. But in a bizarre twist, the next month Lt. Cdr. Theodore Swartz managed to down a MiG-17 using an unguided folding-fin Zuni rocket intended for air-to-ground targets.

However, the five-inch rockets were involved in one of the worst carrier accidents in U.S. history, when on July 29, 1967, an electrical surge triggered a Zuni rocket carried onboard an F-4 Phantom that was queued for takeoff on the USS Forrestal. The rocket blasted open the external fuel tanks of a Skyhawk in front of it, spraying jet fuel and debris across the carrier deck, which immediately ignited. A minute later, the fire detonated the thousand-pound bombs carried on the unfortunate Skyhawk, killing most of the trained firefighting crew sent to quell the flames. More than 134 sailors died in the ensuing conflagration and damage-control effort, resulting in an entire squadron’s worth of Skyhawks being burnt to a crisp.

One of those lucky to escape alive was a young John McCain, today the sitting senator from Arizona, who had been in the A-4E next in line to the one that detonated. He managed to jump off the nose of his plane as it caught fire and was blasted across the deck by the detonation of the bomb. Four months later, on October 26, 1967, McCain was dropping bombs on a power plant in Hanoi when an SA-2 surface-to-air missile sheared off a wing from his A-4E. The Navy pilot bailed out into Truc Bach Lake in northern Hanoi, whereupon he was captured and went on to endure six years of torture and captivity.

By the end of the war, Navy and Marine Skyhawks had flown tens of thousands of combat missions, including 195 destroyed by enemy fire. An air strike delivered by Marine Skyhawks in 1973 is reputed to have been one of the last delivered by U.S. combat aircraft in the Vietnam War.

The Skyhawk lingered several more decades in U.S. military service. The Marine Corps was reluctant to part with the reliable ground-support plane. It acquired an advanced A-4M model capable with more powerful engines, extra cannon ammunition, and the hardware to sling early Maverick missiles and laser-guided bombs. These remained active until they were replaced by Harrier jump jets in the 1980s. The Blue Angels acrobatics team also flew used the agile aircraft from 1974 to 1986, replacing much faster but clumsier F-4 Phantoms.

The Skyhawk also remained a favorite “aggressor” plane in U.S. Navy training exercises because it ironically boasted similar speed and agility to its chief historical foe, the MiG-17. As such, it became a valuable training foil at the Top Gun school, teaching Phantom and Tomcat pilots how to deal with slower but more maneuverable opponents. Combined with its reliability, simplicity and low operating costs—only $3,000 per flight hour compared to $42,000 for an F-15—the Skyhawk remained popular as a trainer well into the 1990s. Several Skyhawks continued to be flown by private firms in the role of military trainers today.

Eagle of the Middle East

As the Vietnam War raged, so did the Arab-Israeli conflicts. The Skyhawk, as usual, was at the forefront of the action. Ninety A-4s—known as in Hebrew as the Ayit, or Eagle—entered the service of the Israeli Air Force in 1967. These were modified into the A-4H variant, which can be distinguished by their a longer-tail pipes—a measure designed to lower the Skyhawk’s infrared signature in the face of heat-seeking missiles. The A-4H also had uprated J52 engines and much harder-hitting thirty-millimeter ADEN cannons, as the Israelis placed greater value in strafing runs. In 1973 superior A-4Ms were also purchased and reconfigured to Israeli standards as the A-4N.

The Skyhawks served as the IAF’s primary dedicated attack plane during the incessant border skirmishes of the War of Attrition with Egypt. Five of them fell prey to much faster Egyptian MiG-21 jets. However, in May 1970, one Israeli Skyhawk pilot managed to turn the tables on a slower MiG-17 over Lebanon in an decidedly unconventional manner, as recalled by Col. Ezra Dotan: