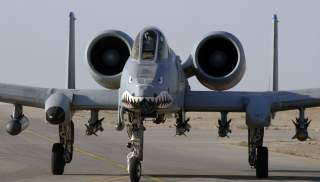 In a victory for supporters of the battle-proven A-10 close air support aircraft, Congress provided the necessary seed money to extend the fleet’s lifespan for at least another decade in its last spending bill. The U.S. Air Force had announced in 2017 that 110 A-10s were in danger of being retired because their wings were rapidly approaching the end of their useful service life.

The seed money is not as clear-cut a victory as many have supposed, however. The $103 million Congress appropriated for the A-10 re-winging project will only produce four new pairs of wings and it will likely take six years before new wings are installed on any operational A-10s. These funds will mainly be used to start up an entirely new production line.

The Air Force claims it needs all this money and time to get competitive bids to start up the new wing production line. All the while, the men and women serving in combat for the next six years badly need to be able to count on an A-10 force that is not shrinking rapidly due to a failure to replace worn out wings.

The unnecessary time delay and expense of the Air Force’s chosen path should frustrate everyone committed to responsible and effective government spending and life-saving close air support for our troops.

Re-winging the A-10 is not a new problem. In 2007 the Air Force awarded the Boeing Corporation a $2 billion contract to build new wings for 242 A-10s. In 2014, F-35 program managers and Air Force leaders started another campaign to retire A-10s in order to free up funding for the F-35.

After strong Congressional pushback the Air Force submitted a budget in 2016 that claimed to give up their efforts to retire the A-10.

Air Force leaders, long hostile to the A-10 and the mission it performs, cut this initial re-winging effort short by allowing Boeing’s contract to lapse in 2016 after only 171 wing sets had been delivered.

Now, due to the intransigence of Air Force leadership in calling for the shutdown of the earlier production line, taxpayers are paying $103 million just to create a new production line and to produce only four wing sets. That is approximately $25 million per set with all of the capital costs included. For comparison purposes, a set of wings cost approximately $3.8 million in 2013.

This fact has upset some Congressional leaders. The chair of the House subcommittee for tactical land and air forces, Rep. Mike Turner is calling for an investigation to determine how and why Air Force leaders decided to shut down the wing production line before Congress finalized its plans for the appropriate force structure.

In April 2016, the House Armed Services Committee added language to the National Defense Authorization Act protecting the program by forbidding the Air Force from using any part of its budget “to retire, prepare to retire, or place in storage or on backup aircraft inventory status any A-10 aircraft.”

Air Force leaders still persist in devising plans to draw down the number of A-10 squadrons from the current nine to six, in spite of Congressional mandates to keep 283 — nine squadrons’ worth — flying. The service has not ruled out the possibility of grounding more A-10s before 2025, which would make it impossible to maintain more than six squadrons.

These plans prompted protests from those who understand the A-10 is the aircraft that strikes the most fear in the hearts of the enemy. Air Force leaders have claimed in the past that budgetary restraints forced them to abandon the A-10 in favor of the F-35 which, they argue, is better suited against the kind of sophisticated air-defenses the force would face in a hypothetical war against Russia or China.

Congress has demonstrated its willingness to fund both programs, which negates the first argument. The second argument is debatable, and completely ignores the low-end conflicts in which we are currently engaged and that will remain a decidedly non-hypothetical reality for years to come.

The Air Force solicited bids for the new contract in December 2017. A closer inspection of the draft contract documents shows that Air Force leaders are happy to take the extra taxpayer money for the project, but they aren’t in much of a hurry to actually receive the new wings for the A-10s. Based on the schedule, the time allotted in the contract, and the timeline of the earlier effort, it might be four years before the first new set of wings is delivered for testing and six years until the first production model is delivered. By that time, 53 or more A-10s may have been sent to the boneyard because their current wings have too many flight hours to be flown safely.

The Air Force has established a schedule for the re-winging project that can generously be called leisurely. Contracting officials sent out the bid solicitation documents on December 22, 2017. If they stick to the draft schedule, the interested contractors will be submitting their bid proposals the first week of June 2018.

The Air Force will spend nearly nine months evaluating these bids before the contract will be awarded on March 25, 2019. Readers will remember that this 15-month process is not creating a new product; it is simply re-contracting for wings that have been in production for nearly a decade and were arbitrarily cancelled less than two years ago.

More evidence of the lack of urgency to get new wings to the A-10 fleet can be found buried in the draft contract solicitation. The winning contractor will be required to deliver the first set of wings within 1,095 days of when it was announced that the contract was awarded. That means that in addition to the year it will take Air Force contracting officials to sort through their paperwork, the contractor will have an undemanding three years before they have to make their first delivery.

At the end of this potentially four-year-long process, all the Air Force will have are prototypes that will then have to go through the formal testing process. Based on the unhurried pace that Air Force leaders have set for the project up to this point, it would be a safe bet to assume they won’t attempt any testing shortcuts in the same way they have with other programs.

Rep. Martha McSally, a former A-10 pilot and squadron commander and current member of the House Armed Services Committee, questioned in an April 2018 hearing another instance of the Air Force’s foot-dragging, this one found in their most recent budget request.

She wanted to know why the Service only requested enough money to buy up to 12 wing sets in the 2019 budget, to be delivered three years or so later, when the depot facility at Hill Air Force Base can install up to 32 a year. Even worse, by the time those 12 wing sets are delivered, 40 or more A-10s will have been grounded and sent to the boneyard, if the Air Force leaders have their way.

It bears repeating that this slow production ramp-up is not due to the problems of producing a new and untested design. These A-10 wings were being produced less than two years ago and have been successfully installed on 171 currently flying A-10s.

Air Force leaders don’t have to go through all of this. If the Air Force really wanted to support the close air support mission, they have the authority to expedite this procurement. If Air Force leaders declared this an urgent operational need—which it obviously is—they could use regulations that were tailor-made for providing rapid support to troops in harm’s way.

Pilots are flying A-10s over the skies of our active war zones virtually every day. One astute online commenter captured the absurdity of the Air Force leadership on this matter by pointing out that the A-10 is so critical to the current war efforts that they are literally flying the wings off them.

The Pentagon most famously used this process to acquire the mine-resistant ambush protected (MRAP) vehicles at the height of the Iraq War. In response to rising casualties from IEDs and after concerns were raised by whistleblowers inside the Pentagon, Marine Corps leaders developed the requirements for a hardened vehicle in 2005.