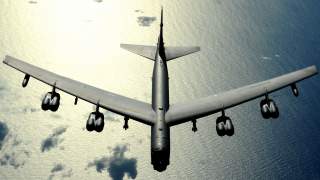 “Their structure, service life and air frames are good until around 2040. They are built very strong structurally. This is not a structural modification, but upgrades to the capabilities and the avionics,” a senior Air Force official explained. “You are taking this old structurally sound airframe and putting modern avionics, modern communications technology and modern weaponry into it.”

Two distinct, yet interwoven B-52 modernization efforts will increase the electronics, communications technology, computing and avionics available in the cockpit while simultaneously configuring the aircraft with the ability to carry up to eight of the newest “J-Series” precision-guided weapons internally – in addition to carrying six weapons on each wing, officials said.

A key attribute in terms of “machine-to-machine” data-transfer technology which allows for more efficient, seamless and rapid communication of combat-relevant information.

Alongside moving much of the avionics from analogue to digital technology, CONECT also integrates new servers, modems, colored display screens in place of old green monochrome and provides pilots with digital moving-map displays which can be populated with real-time threat and mission data, developers explained.

“The key to this is that this is part of the long-range strike family of systems — so if you take off out of Barksdale Air Force Base and you go to your target area, it could take 15 or 16 hours to get there. By the time you get there, all the threat information has changed,” an Air Force official said. “Things move, pop up or go away and the targeting data may be different.”

The entire fleet of B-52 will be operational with CONECT  will be ready by 2021, developers told Warrior.

The Air Force is also making progress with a technology-inspired effort to increase the weapons payload for the workhorse bomber.