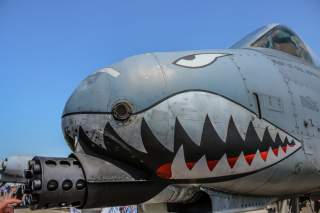 The U.S. Marine Corps, tired of waiting for the continuously-delayed F-35B, has gone to the Arizona boneyard to retrieve some of its preserved, first-edition F-18 Hornets to fulfill its close air support obligation to protect Marines on the ground.

Mindful of the aphorism “willful waste makes woeful want,” the Marine Corps preserved its F-18s in the boneyard just in case it ever needed them again.

The U.S. Air Force, not feeling a similar obligation to protect U.S. Army soldiers on the ground and arguing that the F-35A can perform close air support as well as the A-10 Warthog can do, is now claiming it cannot afford the A-10s because it needs the money to support the forthcoming F-35A.

With a mentality reminiscent of Vietnam thinking — “We had to destroy the village to protect it!” — the Air Force is dismantling some of its stored A-10s.

Even the warning from the popular musical Hamilton — “Don’t throw away your shot!” — is not enough to get the Air Force to reflect on the possibility the thin-skinned F-35A might not be up to the job of getting down low and slow to save soldiers’ lives.

The “C” version is an upgrade to the airframe that gives the airplane an additional 8,000 hours of flying time and new avionics. For reasons that remain unclear, the Air Force is destroying stored A-10s, even some of the A-10Cs, many of which still have thousands of hours of life remaining.

I wrote to the Air Force to ask for detailed information about the stored Warthogs. Terry Pittman from AMARG declined to answer all of my questions. “We consider this information to be for official use only,” Pittman wrote.

But Pittman did say that the Air Force has removed parts and engines from many of the stored A-10Cs. “Most of these aircraft have experienced some reclamation of critically-needed parts.” Just 20 A-10Cs in the highest category of preservation are exempt from “cannibalization.”

Why the Air Force decided not to leave their dormant airframes preserved in the Arizona sunshine is difficult to comprehend, as even the Navy’s ancient F-8 Crusaders, which have not flown since the 1980s, have remained intact at Davis-Monthan.

Because the A-10 has specific capabilities for protecting soldiers in combat, it has many defenders within the Air Force. Some brass have attempted to silence their voices.

“If anyone accuses me of saying this, I will deny it … anyone who is passing information to Congress about A-10 capabilities is committing treason,” Maj. Gen. James Post, then vice commander of Air Combat Command, told a group of pilots in January 2015.

This concept of “treason” appears to be part of the Air Force’s culture, an ethos that abhors the more difficult and dangerous mission of providing close air support and brands anyone who disagrees with its doctrine of strategic bombing — one that dates back to the 1920s — as a traitor.

Way back when the Air Force was known as the Army Air Service, it believed it could identify vital cogs in an enemy’s infrastructure that, once destroyed with with “pinpoint” bombing raids, would compel the enemy to surrender.

That mentality endures. In the mid-1980s, Chuck Spinney, then working in the Pentagon for the Secretary of Defense, prepared an issue paper that suggested it was time to begin studying a follow-on replacement for the A-10, one with an improved thrust-to-weight ratio for greater acceleration, longer loiter time and smaller size, while still retaining all the benefits of the A-10’s basic design — particularly its powerful gun and high survivability.

The deputy secretary of defense approved the issue paper, but Lt. Gen. Merrill McPeak, a few years from becoming the Air Force’s chief of staff, objected.

Spinney suggested that McPeak go down to Tampa, Florida, where Lt. Gen. Pete Quesada lived in retirement, because Quesada was known for his brilliant tactics supporting troops on the ground during the invasion of France in 1944.

McPeak declined the offer. “I wouldn’t talk to that traitor,” McLeak reportedly said.

“McPeak clearly meant that Quesada’s insistence on subordinating air operations — and a share of the Air Force [bomber] budget — to the needs of Army grunts in a ground battle was equivalent to being a ‘traitor’ to the Air Force’s ideology of victory thru air power alone, via its theory of strategic bombing,” Spinney told me.

“The thrust of McPeak’s point was philosophically identical to that made by Gen. Post when he used the word ‘treason’ almost 30 years later to characterize any Air Force officer’s verbal support of the A-10 to anyone in Congress,” Spinney added.

As the A-10 continues to attack ISIS in the Middle East, it strains credulity that the Air Force would consider destroying the newer, upgraded A-10C. But culture is a strong, and even when faced with a threat like ISIS, the moral imperative to reduce the probability of Army soldier dying from lack of close air support is not enough to make the Air Force put American lives before its doctrine.

This follows because the Air Force still believes it can identify the vital centers whose destruction will cause an enemy to lose its will and capacity to wage war. Of course, if that were true, the Army would not have needed to invade France on June 6, 1944.