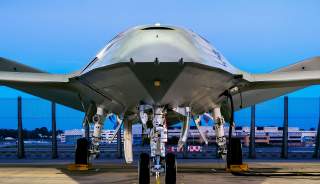 The U.S. Navy’s fleet carrier force has no equivalent around the globe—but naval strategists are increasingly concerned that they have a range problem. Quite simply, deadly ship-killing weapons with ranges of five hundred miles or greater are proliferating across the globe, including the Russian Kalibr and Brahmos cruise missiles and the Chinese DF-21D ballistic missile. By contrast, the Super Hornet and Lightning fighters onboard the carrier have combat radius of only five hundred and seven hundred miles respectively range limitations that cannot be easily circumvented.

A related problem is that the Navy has retired both the KA-6 and S-3 Viking tanker planes which used to provide aerial refueling for its fighters. Instead, FA-18E/F Super Hornet fighters equipped with Cobham refueling pods are gassing up their comrades.

This is a unique and handy capability of the twin-engine jet fighter, but it is akin to using a race car to do the job of a moving van; high-performance fighter planes that cost tens of millions of dollars are burning through their airframe hours serving as fuel trucks. Currently, twenty to thirty percent of all Super Hornet sorties are dedicated to refueling other Super Hornets. This undoubtedly has contributed to poor readiness rates of the Super Hornet fleet, with only half in flyable conditions and just 30 percent combat-ready according to a report in 2017.

In 2013, the Navy devised the UCLASS program to develop a stealthy carrier-based multi-role drone designated the RAQ-25 Stingray that could spy on or attack targets deep within enemy airspace. However, after four different companies had invested in the competition, the Navy completely changed its requirements in 2016 to a Carrier-Based Aerial Refueling System (a tanker) without any stealth characteristics required. Reportedly, the naval aviation community preferred to have the drones improve the efficiency of their existing manned aircraft, rather than investing in a platform that might supplant their role. There was also concern that the original ambitious specifications were leading to unaffordable ‘gold-plated’ drone designs.

The new specs call for a Super-Hornet size UAV that can juice four to six fighters with up to fourteen to fifteen thousand pounds (2,200 gallons) of fuel—after having already flown five hundred to six hundred miles. This means that the new MQ-25 drone would be a “mission tanker” that refuels strike jets mid-mission, rather than a recovery tanker, which refuels returning jets as they await their turn to land. Although a “five wet” Super Hornet fully loaded with five external fuel tanks can carry the same weight in fuel, it would burn through far more gas on a long-range mission as it is optimized for performance over endurance. While a new automated landing system for the Super Hornet is expected to speed up the landing process and diminish the demand for recovery tanking somewhat, the MQ-25 would also pitch in for this role, with an expected capability of providing refueling for three landing cycles.

According to an interview with Admiral Mike Shoemaker in the Naval Institute journal Proceedings, the new drones could extend the combat radius of a Super Hornet from five hundred to eight hundred miles. However, some commentators lament that the drone’s requirements did not stipulate a more generous fuel load to accommodate the greater maximum range of an F-35 stealth fighter. (To be fair, one manufacturer claims on its website that fifteen thousand pounds of fuel would extend the combat radius of two F-35s to one thousand miles.) Others are skeptical that fifteen thousand pounds of fuel would actually result in such a significant range increase, particularly when divided amongst multiple aircraft.

The new drones are required to use the same Cobham buddy refueling pods as used on the Super Hornet, and come with electro-optical and infrared sensor turrets. Practically speaking, the tankers drones are likely to be semi-autonomous vehicles capable of performing routine tasks with limited operator input. The Stingray is also supposed to retain a modest high-endurance Intelligence-Search-and-Reconnaissance capability, including the ability to mount a surface-search radar.

The Navy originally planned to procure a total of seventy-two MQ-25As, divided into four drone detachments, with one assigned to each carrier air wing plus several spares. A corresponding drone control console would be installed on each carrier, with the USS George H. W. Bush and the Dwight Eisenhower first in line. However, in October 2017, the Navy announced it would only fund the purchase of four MQ-25s up front—and then decide whether to procure the remaining sixty-eight.

This waffling from the Pentagon, combined with the fact that all four companies had already begun developing much more capable drones than called for, has contributed to uncertainty surrounding the program. Grumman, the presumed front-runner in the competition, withdrew its X-47-derived design in October 2017.

General Atomic, manufacture of the Predator and Reaper drones, was first to unveil its Stingray concept art in October 2017. The conventional-looking design is derived its Sea Avenger drone, with a V-shaped tail, a Pratt & Watt 815 high-bypass turbofan and a thick fuselage. A unique feature of General Atomic’s design is a system which allows the drone to interpret hand signals from deck crew while coming in for a landing. General Atomics has partnered with Boeing Autonomous System to improve its prospects and has released a detailed list of subcontractors for the drone’s various components.

This means that Boeing has two horses in a three-way race. In December 2017, Boeing’s Phantom Works division unveiled images of an actual completed T-1 drone prototype, which has since been photographed maneuvering on the tarmac of Lambert Field in St. Louis, Missouri.

Though also using a wing-body-tail configuration, Boeing’s design retains many stealthy features including a flush dorsal jet intake and continuous curved surfaces. The T-1 apparently uses Super Hornet components to lower costs, and features large wings that would presumably give it good long-range endurance. The fact that Boeing has already built a prototype will also count in its favor.

Finally, In March 2018 Lockheed released photo-realistic concept art for a tailless flying wing tanker which distantly resembles the B-2 Spirit stealth bomber, and more proximately, Lockheed’s RQ-170 Sentinel reconnaissance drone, one of which was hijacked and captured by Iran in 2011. The flying wing design involves fewer components to manufacture and lends itself to a stealthy radar cross section, but the tanker model has decidedly un-stealthy jet intakes. Lockheed’s concept arts depicts two underwing hardpoints, one of which is dedicated to the Cobham refueling pod, while the other presumably could carry sensors or electronic warfare pods.

Among other consideration, the Navy will have to evaluate how useful stealth characteristics are for the aerial tanker jobs. A mission tanker is likely to come closer to defended aerospace than a recovery tanker, and Russian and China have both developed extra-long range weapons such as the R-37 air-to-air and 40N6 surface-to-air missiles specifically designed to threaten clumsy tanker and radar support planes. Even limited stealth features on a tanker might attenuate the threat posed by such weapons by reducing the range at which they can be tracked on radar.

A second consideration could be drone’s potential adaptability into a multi-role platform with attack and electronic warfare capability, as well as fully developed stealth characteristics for penetrating further into contested airspace. The Navy’s current requirements are laser-focused on the tanker role without the slightest nod to future capabilities—but given how commonly carrier-based aircraft have been retrofitted to new roles, the Navy will find it hard not to take that angle into account.

The current Stingray tanker program is intended to increase the viability of the existing carrier air wing, rather than radically alter how they operate. Undeniably, a carrier that can dispatch strikes seven hundred or eight hundred miles away from a hostile shore faces a significantly less intimidating threat ecosystem than at four hundred miles. However, that still leaves the big ships within the operational radius of AIP-powered submarines, medium-range ballistic missiles and shore-based attack planes armed with cruise missiles. Therefore, some critics argue that by passing on the opportunity to develop a very-long range strike drone, the Navy may be tethering itself to the limitations of existing platforms.

The Pentagon is slated to select the winner of the competition in September 2018, with the first four production models to be delivered in 2023. Under the current program, the Navy would then test the Stingrays for before deciding whether to procure the remainder of the order, which not follow until 2026.

Sébastien Roblin holds a Master’s Degree in conflict resolution from Georgetown University and served as a university instructor for the Peace Corps in China. He has also worked in education, editing, and refugee resettlement in France and the United States. He currently writes on security and military history for War Is Boring.