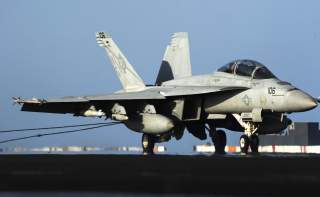 The Navy is preparing to launch an industry competition for a first-of-its-kind, cyber-hardened unmanned aerial refueling drone for eventual service on an aircraft carrier deck by the early to mid 2020s.

The concept of the effort, called the MQ-25 Stingray, is to fortify the Carrier Air Wing with a hack-proof unmanned refueler able to massively extend the strike and mission range of its on-board aircraft.

The service has awarded four development deals for the MQ-25 to in anticipation of a formal proposal to industry by sometime this summer, NAVAIR Spokeswoman Jamie Cosgrove told Scout Warrior. Deals went to Boeing, Lockheed Martin, General Atomics and Northrop Grumman.

Engineering an unmanned aerial refueling tanker able to take off from a carrier deck and support fighter jets en-route to attack missions is a vital aspect of the Navy plan to meet emerging enemy anti-ship missile threats.

The new carrier-launched tanker will be designed to extend the combat range of key carrier air-wing assets such as F/A-18 Super Hornets and F-35C Joint Strike Fighters. Such an ability is deemed vital to the Pentagon’s concern that long-range precision guided anti-ship missiles are increasingly able to target and destroy aircraft carriers at distances as far as 1,000-miles off shore.

The threat, including weapons such as the Chinese-built DF-21D missile referred to as a “carrier-killer” able to destroy targets more than 900 miles off shore, is sufficient to potentially prevent aircraft carriers from operating in closer proximity to enemy coastlines in order to project power and hold enemy targets at risk, many US military developers say.

“MQ-25A Stingray will help to preserve the power projection dominance of the nation's carrier fleet. MQ-25A Stingray is the next step in the Navy's evolutionary integration of unmanned air systems into the carrier strike group's operational environment.  As part of our incremental approach this will allow the Navy to deliver carrier-based unmanned capability to the fleet faster,” Cosgrove said in a statement to Scout Warrior last year.

Advantages of a Drone Tanker:

An existing large fuselage tanker, such as the emerging Air Force KC-46A, might have too large a radar signature and therefore be far too vulnerable to enemy attack. This, quite naturally, then creates the need for an unmanned platform or drone able to better elude enemy radar and refuel attack aircraft on their way to a mission.

Despite the emergence of weapons such as the DF-21D, senior Navy leaders and some analysts have questioned the ability of precision-guided long-range missile to actually hit and destroy carriers on the move at 30-knots from 1,000 miles away. Targeting, guidance on the move fire control, ISR and other assets are necessary for these kinds of weapons to function as advertised. GPS, inertial measurement units, advanced sensors and dual-mode seekers are part of a handful of fast-developing technologies able to address some of these challenges, yet it does not seem clear that long-range anti-ship missiles such as the DF-21D will actually be able to destroy carriers on the move at the described distances.