How the Taiwan Travel Act Could Start a U.S.-China War 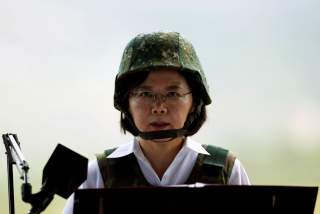 On March 16, 2018, President Donald Trump signed into law the Taiwan Travel Act, which encourages “officials at all levels of the United States Government” to visit and meet with their Taiwan counterparts and to “allow high-level officials of Taiwan” to enter the United States and to meet with their U.S. counterparts, among other goals. The Chinese government has criticized the new law, describing it as a “mistake” and a violation of the One-China Policy. Chinese President Xi Jinping declared that “any actions and tricks to split China are doomed to failure and will meet with the people’s condemnation and the punishment of history.”

This latest controversy comes as China has begun exerting more military pressure against Taiwan. In recent weeks, China has increased air and naval operations in the vicinity of the island—including escorted strategic bomber encirclement flights—and deployed its aircraft carrier in waters near Taiwan, among other actions. This pressure campaign may be Beijing’s attempt to express its displeasure with Taiwan’s president, Tsai Ing-wen, or it may be a harbinger of a much more dangerous military campaign to come.

Whatever the motivation, Chinese operations around Taiwan will inevitably involve the United States, which is consistent with a historical pattern that has existed since at least 1950. In that year, President Harry Truman deployed the Seventh Fleet in the Taiwan Strait. Explaining his reasoning, Truman stated that the future of Formosa [Taiwan] . . . should be settled peacefully [and] the mission of the Seventh Fleet is to keep Formosa [Taiwan] out of the [Korean] conflict.” Truman emphasized that the U.S. purpose was “peace, not conquest.”

In 1954, the pattern of U.S. protection of Taiwan would recur as mainland China began artillery assaults on one of Taiwan’s outer islands, which is adjacent to China. The United States stepped in and provided Taiwan with various type of military assistance. In December of that year, Washington signed a formal mutual defense treaty with Taipei. The following month Congress passed the Formosa Resolution, which authorized the U.S. president “to employ the armed forces of the United States for protecting the security of Formosa, the Pescadores, and related positions and territories of that area.”

In 1958, China once again threatened military action against Taiwan; the United States responded with assistance for Taiwan, which helped mitigate what would later be known as the second Taiwan Strait crisis. In the more recent past, a third Taiwan Strait crisis occurred in 1995–1996. Once again, Beijing applied coercive military power against Taiwan and, similar to the previous crises, the United States stepped in to provide Taiwan with the safety and military protection it needed.

Thus, the pattern for almost seventy years has been for China to apply military pressure against Taiwan, the United States to push back against such pressure, and, ultimately, both sides to back down, leading to a reduction in tensions and a continuation of the status quo. The formula has worked for decades, much to the benefit of Taiwan, the United States and perhaps even to China itself.

However, there are growing indications that this pattern may no longer be sustainable. This is because the China of 2018 is not the same as the China of the Cold War era. With an increasingly powerful navy, air force and an array of other capabilities, Beijing now has an unprecedented ability to project force. This means that the balance of power is shifting in the Taiwan Strait, almost entirely in favor of Beijing. Moreover, Taiwan has not helped matters; by failing to adequately invest in its own defense capabilities, Taipei has exacerbated this power shift.

This puts the United States in a quandary. Should it continue to maintain the “defend and push back” pattern of the past seventy years vis-à-vis Taiwan and potentially risk a major conflict with China? This question is crucial because there are few signs that the Taiwan issue is going to be resolved by itself or anytime soon. In fact, the persistence of Taiwan’s unresolved status can be attributed to at least two major factors.

First, most of Taiwan’s population simply does not wish to be “liberated” by the People’s Republic of China. One prominent poll sponsored by the Taiwan-based Global Views Research organization consistently shows that a majority of residents in Taiwan prefers the status quo or some variant of the status quo, which means de facto (but not de jure) independence. Smaller groups polled prefer reunification or de jure independence, the latter of which is a red line for Beijing.

A second reason relates to the geopolitical dynamics of the key actors involved, which, in addition to Taiwan, traditionally has meant the United States and China. One way to understand this is to conceptualize a triangle that has each actor (Taiwan, China and the United States) occupying one end.

The first leg of the triangle, and arguably the most important, is the one connecting the United States and China. Chinese leaders consider Taiwan to be the central challenge in their relationship with the United States. Not surprisingly, Taiwan has played a prominent role in the various communiques signed and issued by both countries, with the most prominent of these being the Shanghai Communique issued in 1972 when President Richard Nixon conducted his historic visit to China.

The Shanghai Communique states that "the United States acknowledges that all Chinese on either side of the Taiwan Strait maintain there is but one China and that Taiwan is part of China. The United States Government does not challenge that position." In the second major communique, also known as the “Normalization Communique,” which was issued in December 1978, Washington concluded that "the Government of the United States of America acknowledges the Chinese position that there is but one China and Taiwan is part of China."

This theme of the United States acknowledging China's position on Taiwan is continued in the third major communique issued by the two countries in August 1982, which states, among other things, that "the United States Government attaches great importance to its relations with China, and reiterates that it has no intention of infringing on Chinese sovereignty and territorial integrity, or interfering in China's internal affairs, or pursuing a policy of ‘two Chinas’ or ‘one China, one Taiwan.’” In summary, these communiques evince a largely conciliatory tone by the United States in favor of Beijing and they tend to emphasize that the U.S. acknowledges the Taiwan issue to be an internal matter for China.

In contrast with this first leg of the triangle, the second leg—the relationship between the United States and Taiwan—features a very different tone, particularly with the emphasis of U.S. security assurances directed toward Taiwan. The first and most important foundational pillar of this second leg relationship is the formal defense treaty relationship that Washington and Taipei adhered to for roughly twenty-five years, which also involved a significant U.S. military presence on Taiwan. When the United States decided to formally establish diplomatic relations with China (and thereby sever relations with Taiwan), Congress passed the Taiwan Relations Act (TRA), which President Jimmy Carter signed into law on April 10, 1979.

The TRA is particularly significant because it is much more than a communique, statement or understanding; it is actual U.S. federal law (Public Law 96–8) and carries the force and formal legitimacy associated with that status. The TRA, among other things, states that it is the policy of the United States

to “preserve and promote” close relations between the people of the United States and the people on Taiwan and that the “peace and stability” around Taiwan is in the “political, security, and economic interests of the United States.” And perhaps most significant is the pledge to provide Taiwan with “arms of a defensive character.”

Added to this complicated mix is the third leg of the triangle, which links Taiwan and the People's Republic of China. This leg naturally has its own unique dynamics and features both hard (coercive) and soft (attraction) approaches in furtherance of the goal of reunification. Some examples of the soft approach include Deng Xiaoping’s “One China, Two Systems” approach, Ye Jianying’s “Nine-Point Proposal,” and Jiang Zemin’s “Eight Points.” Some of these proposals have offered Taiwan a high degree of autonomy as long as Taipei accedes to Beijing’s rule.

However, Beijing’s soft approaches toward Taipei have often been overshadowed by its hard approaches, such as its March 2005 “anti-secession law,” which was formulated “for the purpose of opposing and checking Taiwan’s secession from China.” Article 8 of the law specifically authorizes “non-peaceful means and other necessary measures” to prevent Taiwan’s secession and “to protect China’s sovereignty and territorial integrity.” The law not only authorized Chinese “non-peaceful” action in the event that Taiwan declared independence, it also allowed such measures to be employed in the event that the “possibilities for a peaceful reunification should be completely exhausted.” In other words, Taiwan might be subjected to Chinese military action even if it simply refused to consider proposals for reunification or to engage in negotiations.

Thus, as the triangle model demonstrates, the various communiques, proposals and laws involving the three primary actors (vis-à-vis the Taiwan issue) are often semantically incoherent and rife with contradictions. All of this suggests that the chances of a negotiated settlement may be lower than many observers hope and, as a corollary, the chances of Chinese military action against Taiwan may be higher than most are anticipating. If a military scenario took place, it would create a huge dilemma for the United States, forcing the latter to determine whether Taiwan and its safety constituted a “vital” national interest.