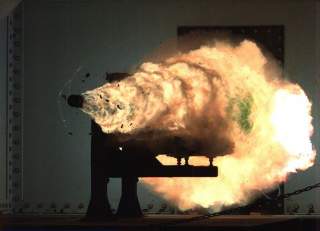 Kim Jong-un is on a crash program to deploy a missile with a nuclear warhead.  In fact, he wants to deploy a vast arsenal of nuclear-tipped missiles to threaten adversaries at all ranges.  He wants them to be mobile, both on land and at sea.  Barely a week goes by that Kim does not launch another missile, from the short-range Scud, to the medium-range Rodong, to the intermediate-range Musudan, to the intercontinental-range Teapodong.

The launch Wednesday of a submarine-launched ballistic missile (SLBM) that flew more than 300 miles toward Japan demonstrates how determined Kim is to reign over a massive missile regime.  He was probably serious when he boasted that the SLBM test launch was his “greatest success.”  This might be true in a number of respects but above all because of the apparent speed with which Pyongyang leapt ahead in its missile technology.

But success might be just a step closer to catastrophic failure.  Kim’s dangerous fantasy about being the king of missiles has no happy storybook ending.  What goes up must come down.  Without a diplomatic about-face, Kim will be marching down one of two nightmarish future worlds.

First, emboldened by his vision of many missiles, he will eventually cross a red line, conducting one provocation too many, whether by miscalculation or accident, that ignites a conflict and ends in his demise.  Or, second, Kim succeeds in spending all of poor North Korea’s treasure on a missile regime only to find that South Korea and its ally, the United States, have been ten steps ahead all along.

Today, the ROK-U.S. alliance is ahead technologically and can continue to strengthen a multi-layered missile defense system, encompassing national capabilities such as the ROK’s Korea Air and Missile Defense (KAMD) system, and multinational capabilities such as the Terminal High-Altitude Area Defense (THAAD) system.  At the same time, the ROK-U.S. alliance, along with neighboring Japan, have underwater systems that can track and neutralize any North Korean submarine leaving port with a missile such as the one that was recently test fired.

But jump ahead to the future and rather than Kim being able to threaten the world with his arsenal of missiles, it will be South Korea and the United States that will be prepared to break out game-changing technology that renders his missile regime—and perhaps the Kim family itself—obsolete.

Missiles and physical mass are likely to give way to energy weapons such as electromagnetic railguns.  And weapons such as these are being spurred by a U.S. initiative to push the research and development of cutting-edge technologies to preserve America’s ability to project military power in a world of ubiquitous precision munitions.

Deputy Secretary of Defense Robert Work, who preceded Michele Flournoy as CEO of my Center for a New American Security (CNAS), has dubbed this quest for technological superiority the “Third Offset” strategy.  The moniker Third Offset refers to previous periods in post-World War II history when the United States used technological advances to leap ahead of a growing threat.  Soviet conventional superiority in Europe catalyzed U.S. nuclear programs, the First Offset, and Soviet nuclear parity led to a U.S. regime based on long-range, precision-guided conventional munitions, the Second Offset.

This fall CNAS will publish a report based on a study that I directed and includes contributions from some leading American and Korean experts who apply the Third Offset to the Korean Peninsula.  A conference presentation on the subject in early July caught the attention of North Korea’s Foreign Ministry, which felt obliged to denounce the effort.  Perhaps conjuring up an image from so many failed North Korean missile launches, the official boasted that North Korea “is fully capable of making any strategy of the U.S. go belly-up determinedly, to say nothing of the ‘third offset strategy.’”

North Korea is big on words.  It employs a legion of propaganda poets, operating with little technical knowledge and even less access to Pyongyang’s secret programs, to wage an information war aimed at both internal and external audiences.  As a result, in the end it will be North Korea that is truly surprised by how far it is slipping behind.

My able young colleague, Seongwon Lee, who has just completed a six-month Korea Foundation fellowship at CNAS, has conducted a special focus on electromagnetic railguns.  In this one system’s development, one can see the demise of North Korea’s missile regime.

As Seongwon Lee explains, a railgun is a weapon that fires projectiles with electromagnetic repulsion instead of chemical explosion.  Just by its sheer speed, the round is able to deliver more damage than a missile crowned with a conventional warhead.  The absence of an explosive warhead gives the railgun technology an upper hand in safety, magazine depth, and cost.

In the long run, this new propulsion system can upgrade ROK's deterrence against North Korean nuclear threats on its three current lines of efforts: deterrence through preemption, interception, and retaliation.

First, the speed of railgun ammunitions will allow a more timely strike on targets than can today’s guided munitions launched by scrambled F-15 aircraft.  This will add a new rapid strike arsenal to the existing so-called Kill Chain.

Second, the cost-exchange ratio between missiles and railguns will be turned around.  If embedded into the KAMD system, the railguns' cost-efficiency will make it more feasible than the existing Patriot or THAAD systems.  Thus, railguns will usurp the dominance of the missile.

Third, the magazine depth of railguns will grant more firepower per surface combatant. This will improve the lethality of presence, and add a conventional punch to the retaliatory nuclear deterrence.

When that happens, the rise and fall of North Korea’s missile regime will be self-evident.  And Kim will have realized, too late, that he should have taken the diplomatic offramp offered to him years ago.

Dr. Patrick M. Cronin is Senior Advisor and Senior Director of the Asia-Pacific Security Program at the Center for a New American Security (CNAS) in Washington, D.C.