How the United States Dominates the Battlefield: It Wins Wars at Night 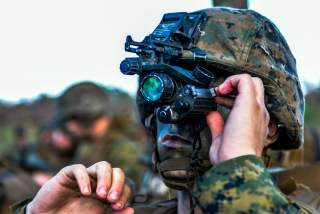 The sky was moonless on the night of May 1, 2011, as two MH-60 Black Hawk helicopters flew toward a walled compound in an upscale enclave of Abbottabad, Pakistan. A power outage further drenched the city in blackness.

To the 23 Navy SEALs fast-roping to the ground, the conditions could not have been better. Under the cover of darkness, they crept toward the home of the world’s most wanted man and stormed inside.

The timing was by design. When retired Navy Adm. Bill McRaven, then the head of U.S. Joint Special Operations Command, scheduled the raid on Osama bin Laden’s home, he did so based partly on the lunar cycle. As for that power outage, although McRaven called it a total coincidence, it may have been more than that.

In the end, it took SEAL Team 6 just 38 minutes to blast its way into bin Laden’s bunker, erase him from existence, and collect a trove of intelligence strewn about his cluttered house. The ability to see in the dark made it all possible.

For decades, the U.S. military has prided itself on “owning the night” thanks to its unmatched night-vision technology. From the early days, when soldiers used clunky infrared scopes to detect and beat back Japanese night raids in Okinawa, the United States has maintained that advantage.

In recent years though, the nation’s visual supremacy has begun to fade. It’s been a quarter century since night-vision devices, or NVDs, were declared the “single greatest mismatch” of the Gulf War, and since then, the underlying technology has remained largely unchanged, leaving soldiers with bulky, analog goggles that have mostly missed out on the digital revolution. In addition to decades of lackluster innovation, powerful NVDs are now readily obtained by U.S. enemies — either on the black market, or, if they can find their way around the State Department’s export ban, on the internet. These developments have “eroded the tactical advantage of night operations enjoyed by the U.S. military,” the Defense Department said in 2014.

“I’m not sure I would use words like ‘eroded,’” Michael Grove, the acting head of the Army’s Night Vision and Electronic Sensors Directorate, tells Task & Purpose. “That said, it is largely accepted that a number of our potential adversaries have increased their capacities.”

The result? A narrowing gap between U.S. night vision and the rest of the world’s. To the military, it’s an unacceptable state of affairs. So Grove’s lab is currently focused on “buying back the overmatch,” as he puts it.

The multi-faceted plan involves straightforward improvements, such as giving soldiers higher fidelity displays that allow for increased clarity, and others that are a bit more complicated. “Sensor architecture will provide soldiers with access to real-time information,” Grove says, conjuring a sci-fi battlescape in which soldiers’ night-vision displays provide them with a Terminator-like stream of data. The heavy headgear is on its way out too (next-generation goggles will look more like a pair of ballistic Oakleys). And at long last NVDs will be able to do what refrigerators have been doing for a few years — get online, creating a battlefield network that allows troops to share data with commanders and one another while also receiving additional information from connected devices, such as drones.

The key, as ever, will be getting the new technology onto the field before our adversaries and pressing our advantage while we can.

America’s first attempts to give warfighters the superpower of night vision came during World War II, when Germany, the United Kingdom and the United States developed systems that relied on infrared spotlights. Bouncing off a distant object — say, a German Panzer — the infrared light was invisible to the naked eye but could be detected by a battery powered device known as a sniperscope. Revolutionary as it was, the technology was impractical. Batteries weighed as much as 30 pounds. Some infrared spotlights were so large they had to be mounted on the back of a truck. And as soon as the enemy acquired his own version of the equipment, the once-invisible infrared spotlight instantly gave away the user’s position.

By the time the United States was fighting in Korea, a greater range made the sniperscope more viable on the battlefield. Still, bad experiences with earlier versions led many military leaders to dismiss the new technology, which still needed a full day for the battery to charge. Those who mastered it, however, were able to deploy the technology with “deadly accuracy to ward off Chinese infiltrators” as the conflict neared its conclusion, according to the Marine publication Fortitudine.

The next generation of NVDs would depart significantly from the sniperscope by eliminating the need to illuminate a target with infrared light. Instead, these NVDs amplified the light given off by the moon and stars. The most famous device of the era, introduced during the Vietnam War, was the starlight scope, a rifle-mounted telescope that amplified ambient light by about 1000 times.

Starlight scopes were used, for the most part, as observational tools. One possibly apocryphal tale, recounted in a 1969 issue of Popular Mechanics, tells how an Army patrol leader, Lt. Robert Hibbs, spotted a Viet Cong force with his starlight scope, and then saw another enemy unit behind them. After quietly allowing the first unit to pass, he ordered his men to fire on the second group. “Each enemy unit, thinking it was being attacked by Americans, opened fire as the U.S. patrol withdrew. They blasted one another.”

In Tour of Duty, Douglas Brinkley’s biography of John Kerry, the former senator recalls wielding a starlight scope on a Navy skimmer as he watched Viet Cong sampans land on the shore of a known contraband trafficking location. Under the cover of darkness, Kerry and the other men on his boat got into position and shot a flare into the sky to illuminate the proceedings.

“The entire sky seemed to explode into daylight,” Brinkley writes. “The men from the sampans bolted erect, stiff with shock for only an instant before they sprang for cover like a herd of panicked gazelles Kerry had once seen on TV’s Wild Kingdom.”

If Kerry had access to the NVDs that began showing up in the 1980s, he may have never had to resort to firing a flare into the sky, by far the crudest way to achieve night vision. This next generation of image intensifying NVDs performed in much lower light than their predecessors and provided improved clarity and image brightness.

By the time Iraq invaded Kuwait in the summer of 1990, the United States had a chance to fully deploy its latest technology, which included both the traditional image intensification capabilities and newer, heat-sensing thermal imaging technology. These devices allowed U.S. troops to fight around the clock at an unrelenting pace. Without the same equipment, the Iraqis didn’t stand a chance.

Night vision was so essential to the coalition’s success in Desert Storm that it inspired a new military slogan. “We own the night,” former Navy Secretary John Lehman told Congress during a 1991 hearing. “It was the ability to attack at night, when all of the rest of the world’s defenses are at 10 percent of what they are in daytime, that gave us this huge immediate impact and edge.”

More than a decade later, when U.S.-led coalitions invaded Afghanistan and later Iraq, the military encountered an enemy that was beginning to use night-vision technology as well. The Taliban and al Qaeda had been able to acquire older NVDs on the black market over the years, but the devices were scarce and few fighters were trained to use them. Nor did they fully grasp how much the U.S.’s night vision capability had improved, leaving them unaware that they were just as visible in the darkness as they were in daytime.

That advantage is now gone. ISIS fighters, particularly those who’ve been recruited from overseas, fully understand the power of night vision, and in some cases, they have obtained their own devices. The State Department has tried to clamp down on the spread of black market NVDs by controlling exports, but when even Walmart has dozens of different night-vision scopes and monoculars in stock, there’s only so much the government can do. Even the Pentagon’s own contractors have been known to stray. New York-based ITT Corp, for instance, was fined $50 million after it was busted selling sensitive technology to China, Singapore and the United Kingdom.

But the best way to reassert the monumental U.S. advantage in night vision isn’t to control exports, it’s to develop groundbreaking new systems, and that’s the military’s current mission. Among the most significant new breakthroughs is the development of goggles that combine image intensification and thermal imaging. Another coming improvement is technology that connects a set of night-vision goggles with a weapon sight, allowing a soldier to point a weapon around a corner, for example, and acquire a target without exposing himself to enemy fire.