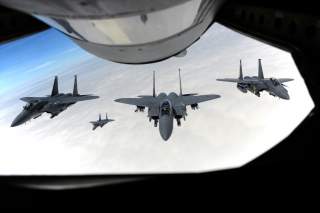 On the eve of President Donald Trump’s visit to Saudi Arabia, Washington has completed negotiating a massive $109.7 billion arms deal with Riyadh. Trump is expected to formally sign the deal at a ceremony this Saturday during his visit to the Kingdom.

According to White House sources, the United States and the Saudis signed letters of offer and acceptance for eight foreign military sales deals worth a total of $12.5 billion earlier today. Those agreements will be implemented as soon the Department of Defense puts contracts in place with industry—and funds are received from Saudi Arabia.

The remaining $95 billion portion of the arms package comes in the form of 34 memorandum of intent items. The details still have to be ironed out, but those additional purchases will likely be a mix of direct commercial sales and foreign military sales contracts. In either case, the Trump Administration will follow the regular process of Congressional notifications as required according to the White House.

The Trump Administration started work on this arms pack on May 1. The chief negotiators were Ahmed Alkhateeb—a senior advisor to the Saudi Ministry of Defense—and U.S. Vice Adm. Joseph Rixey, the Director of the Defense Security Cooperation Agency. The process was finalized remarkably quickly, however, much of the preliminary work had been completed under the previous administration.

Trump’s arms package includes some of the most sophisticated missile defense systems that the United States has to offer including the Raytheon-built Patriot and Lockheed Martin Terminal High Altitude Area Defense (THAAD). While the former has been sold widely to U.S. allies—including previously to Saudi Arabia—the THAAD is a much more capable weapons system that has only been sold to a handful of allies, including the UAE.

According to White House sources, the arms package is designed to “help deter regional threats”—which presumably means Iran. Tehran has been developing an arsenal of ballistic missiles in contravention of United Nations Security Council resolutions. Indeed, the Islamic Republic tested a Khorramshahr medium-range ballistic missile as recently as Jan. 29. At the time, Trump had put Iran “on notice” and this arms package could be seen as part of Washington’s response to Tehran’s missile tests.

While missile defenses are perhaps the most visible part of the deal, the package includes a wide array of “full spectrum” conventional weapons—but the White House has not released the exact details of what it is selling to Riyadh. Conventional armaments in the package for Saudi Arabian ground forces will likely include equipment such as aerostats, tanks, artillery, counter-mortar radars, armored personnel carriers and helicopters. The United States will also provide training on how to use the hardware. The idea is to enable the kingdom “to secure its borders against terrorist or other foreign incursions.”

Trump’s arms package is the largest single defense deal that the United States has ever completed with Saudi Arabia according to the White House. The Obama Administration sold over $115 billion worth of weapons to Saudi Arabia in 42 separate deals during its eight years in office. Those deals included the sale of advanced Boeing F-15SA Strike Eagles, M1A2S Abrams main battle tanks and Patriot missile batteries among a host of other weapons. Arms sales to Saudi Arabia have been controversial due to the Arab nation’s human rights record and its ongoing war in Yemen against Houthi rebels.