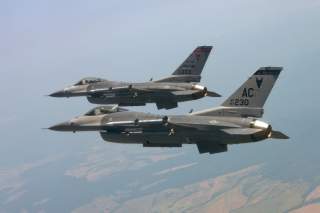 Envision a scenario where two or more supersonic fighter jets are conducting combat maneuvers in such close proximity that they come less than 500-feet away from one another -- when an automatic computer system engineered into the aircraft takes over and re-directs the fighters, saving lives and averting a catastrophic collision.

This is precisely the scenario scientists at the Air Force Research Lab are hoping to make possible by the early 2020s through an ongoing effort to deploy an emerging technology called Air Automatic Collision Avoidance System, or ACAS.

Algorithms are being specifically developed to automatically give computers flight control of an F-16, once it flies to within 500-feet or less than another aircraft, senior Air Force officials said. The computer systems are integrated with data links, sensors and other communications technologies to divert soon-to-crash aircraft.

“We transfer data at 20herz to coordinate with other aircraft in the area and agree to cooperative recovery maneuvers if they are necessary,” Army Burns, Automatic Collisions Avoidance Technology Program, Air Force Research Laboratory, told Scout Warrior in an interview.

Burns explained that their have been several successful tests of the ACAT technology at Edwards Air Force Base, Calif., using F-16s.

"What we do is use a cooperative data link. We can use GPS and INS (inertial navigation systems) sent over a track file to other aircraft in the area. If a collision is going to occur, they agree on a cooperative maneuver," Burns said.

So far, the Air Force has conducted 19 "two-ship" flights and one "three ship" flights using the system to prevent collisions.

"We might even do a 4-ship test as we continue to update the algorithms and make improvements," Burns explained.

The system is also engineered to identify and divert aircraft that are "non-cooperative," meaning not from the US Air Force, she added; sensors are designed to work quickly to detect a flight path or approaching trajectory with the hope of thwarting a possible collision.

“We also look for non-cooperative targets via radar lock to figure out a track,” Burns said.

While this effort has been underway for quite sometime, an Air National Guard mid-air collision of two F-16s in South Carolina earlier this year underscores the service's interest in rapidly expanding promising collision avoidance technology to incorporate air-to-air crashes as well as air-to-ground incidents. Fortunately, in this instance both pilots ejected safely without injury, multiple reports and service statements said.

A major thrust of the effort is aimed at sythesizing ACAS with an existing technology now in F-16s called Ground Collision Avoidance Technology, or GCAT. In similar fashion the air-to-air system, GCAT uses sensors to identify and avoid ground objects such as nearby buildings, mountains or dangerous terrain; GCAT has already saved lives, senior Air Force officials tell Scout Warrior.

"We are looking at integrated collision avoidance and look at points when you are in a scenario when the system wants to activate GCAS and ACAS at the same time," Burns said.

Most of the algorithms, developed by Lockheed Martin, are continuously being refined and testing using simulation technologies.

"The vast majority of aircraft that we have lost have been due to a ground collision with the pilot flying the airplane into the ground due to task saturation or flying low level and losing situational awareness" Lt. Gen. Arnold Bunch, Military Deputy for Acquisition, told Scout Warrior in an interview several months ago.

Also, the goal is to not only expand the algorithms to avert mid-air collisions but also integrate the technology into a wider range of service aircraft beyond the F-16 such as an F-15, F-22 or F-35, service officials said.

Collisions with terrain can also happen if the fighter jet is pulling so many G’s that the pilot loses consciousness, Bunch explained.

"With this technology there is now a chance that the pilot can regain consciousness and become situationally aware and prevent flying that airplane into the ground," he added.

The technology calculates where the aircraft is and where it would hit the ground based upon the way it is flying at the time, Bunch said. If the fighter jet is flying toward a potential collision with the ground, the on-board computer system will override the flight path and pull the aircraft away from the ground.

"We've already had examples of aircraft that would have been lost and the individuals and aircraft that we would have lost had we not invested in this. Now we are trying to share this technology to get it into other platforms," he added.false

"Losing an aircraft is big -- but even bigger is losing a pilot and having to deal with the loss of what I believe is our most valuable treasure, the men and women who operate those things in combat," Bunch explained.

Bunch added that developing algorithms to stop air-to-air collisions is much more difficult than thwarting air-to-ground collisions because there are not two fast-moving aircraft, rather one aircraft and the ground.

"This is a much more complicated engineering and technology feat because now I have three dimensions that are playing at the same time in two separate vehicles. That is in the early stages of development but we have demonstrated some stuff already so that is something we will keep our eye on in the future," Bunch said.