This Is How the U.S. Army Will Fight If American Satellites are Smashed 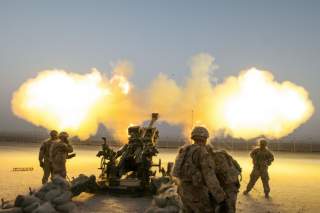 The Army is evaluating a new vehicle-mounted radio technology that enables Strykers, tactical trucks, HMMWVs and Mine Resistant Ambush Protected vehicles to share real-time, combat-relevant information across the force.

A concept behind this technology, referred to as software programmable radio, is to enable mission command tactical information sharing across the force in a combat environment in the event that satellite systems are disabled due to an enemy attack.

The MNVR, made by the Harris Corp., uses NSA certified encryption for additional safety and protection. It integrates into vehicles on-the-move in combat to transmit voice, pictures and data, he explained.

With software programmable radio, each device functions as both a radio and router able to wirelessly transmit information through several government-owned high-bandwidth radios. Some of these waveforms include Soldier Radio Waveform and Wideband Networking Waveform engineered to wirelessly send IP packets, pictures and data across the force without needing a fixed infrastructure such as a cell tower or satellite.

For instance, if anti-satellite weapons were used to destroy or disable a U.S. satellite, SatCom communication could be compromised or destroyed. In this circumstance, operational forces in combat would still need to communicate location, tactical information and various command and control details while on-the-move in a fast-moving battlefield.

A key part of the rationale for this emerging technology is an ability to rapidly relay important data while on-the-move from the company level up to battalion and brigade authorities.

Potential rivals, such as China, are known to be developing what is called ASAT, or anti-satellite, weapons designed for that purpose. As a result, Army engineers, scientists and experts have been working vigorously on developing technologies able to function in what’s called a “SatCom denied” environment.

This is particularly significant because the well-known and widely used force-tracking technology, called Blue Force Tracker, relies upon satellites to provide icons on a digital map displaying combat, terrain and force-tracking information.

The high-bandwidth radios are able to operate in what’s called a “beyond-line-of-sight” environment where mountains, weather or terrain might otherwise obscure communications.

“Army used the NIE to assess the mid-tier of our network. During the NIE we observed that the mid-tier network provided an important link enabling communications and connectivity at the platoon and company level with higher echelons such as battalion and brigade,” Mehney said.