How the U.S. Military Could Strike Iran 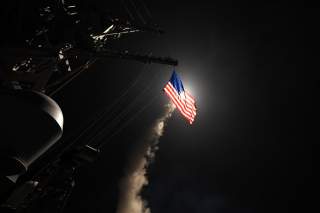 Editor's Note: Consider events in the Middle East, we present the below piece from 2015.

Battlelines have certainly formed over the last week, as debate over the Iran framework agreement heats up. Some love the deal; some hate the deal; others essentially say “no deal” and would presumably start bombing Iran now if they could. But one thing is crystal clear: we are a long way until June, when Iran and the P5+1 will need to craft a concrete deal on paper. John Kerry and Javid Zarif better start getting some extra z’s now, as they might not be sleeping much in the days approaching the final deadline.

As I noted last week, even if a deal is reached on Tehran’s nuclear program, America and Iran will still be at odds in many areas of the Middle East. Yes, in the short term, both nations have common cause in Iraq against ISIS, but what happens when that cause disappears at some point down the road? Both nations will once again be vying for sway in Iraq. So while the short-term trends in the relationship do have promise, the long game is the one that bears watching—no matter how excited the media gets about the deal.

Over the long term, Washington needs to be prepared to confront Iran in many areas of possible competition across the Middle East. Hopefully, competition with Tehran in the Middle East for influence and sway stays peaceful. Like America’s competition with China in the Asia-Pacific and larger Indo-Pacific, both nations will vie for power and influence for decades to come. The danger is that such competition can raise tensions, with tensions spilling into conflict. And a conflict between Iran and America, as we saw last week on these very pages, is something both sides must try to avoid at all costs.

This post takes a look at how Washington could wage a conflict against Iran if the moment ever came to pass. As I mentioned last week, one amazing piece of research when it comes to a U.S.-Iranian conflict—with special focus on Tehran’s A2/AD capabilities and how Washington can negate such capabilities—is the 2011 report released by the Center for Strategic and Budgetary Assessments titled: “Outside In: Operating from Range to Defeat Iran’s Anti-Access and Area-Denial Threats.” While America’s strategic thinking has certainly evolved since 2011(see the DoD version of Air-Sea Battle, or now JAM-GC, the 3rd offset strategy, etc.), the report gives us detailed insights into what would be possible if the unthinkable ever came to pass. The report notes that Iran is investing in capabilities to execute what the authors call a “hybrid A2/AD strategy” over the next two decades. CSBA recommends that the U.S. military “develop a new operational concept for future Persian Gulf contingencies, one that assumes that closein basing may not be available, all operating domains will be contested, and Iran may threaten terror and WMD attacks, including the use of nuclear weapons, to deter or prevent a successful U.S. military intervention in the Persian Gulf.”

So how does CSBA think a U.S. campaign against Iran would unfold? While I would recommend readers at the very least scan over the whole report as what I present here is only a very small sample of its contents, CSBA sees a “massive blinding campaign” being a big part of such a conflict, which, in some respects, is reminiscent of U.S. ideas on how Air-Sea Battle could be used against China:

At the start of hostilities, U.S. forces should move aggressively to degrade, disrupt, and destroy Iran’s C4ISR networks. U.S. counter-network operations should integrate long-range strikes, undersea warfare, electronic warfare, and offensive cyberspace operations against Iran’s early warning radars, maritime surveillance systems, and C2 facilities. Toward this end, bombers operating out of remote or peripheral bases and SSNs and SSGNs in the Arabian Sea would launch a first wave of kinetic strikes using precision-guided standoff weapons against Iran’s fixed sensors and C2 nodes. U.S. special operations forces inserted into Iran could augment these strikes by disabling known C4ISR assets that are difficult to kill with standoff weapons, such as nodes in fiber optics networks. Degrading Iran’s C4ISR networks and air defenses will help pave the way for U.S. Air Force and Navy penetrating aircraft to attack Iran’s mobile radars, and command and control systems.

America must also be prepared for what could happen in space and cyberspace:

Neutralizing Iran’s ability to degrade the U.S. military’s use of space and cyberspace will almost certainly be another important aspect... Although it is unlikely that Iran’s counter-space capabilities will pose nearly as significant a threat to U.S. satellites as capabilities fielded by the PLA, it will be important to protect the U.S. military’s space architecture—including vulnerable ground stations in the United States and abroad—from possible attacks, including attacks by Iran’s terrorist proxies. Iran could use ground-based jammers to disrupt GPS and space-based and airborne C4ISR, particularly around high-value targets. Since these jammers could affect GPS-guided munitions, their neutralization would be important in winning the network/counter-network competition. Similarly, it should be anticipated that Iran and its proxies will conduct offensive cyber attacks to exploit, disrupt, deny, and degrade networks needed to orchestrate U.S. force deployments and operations. If successful, these attacks could extend Central Command’s operational timelines significantly. Moreover, Iran might attempt to employ cyber strikes to disrupt the control systems or data underpinning U.S. civilian power grids and telecommunications networks. These attacks could come in the form of false information, or they may be direct actions to disrupt or corrupt the flow of information. Thus, computer network defense (CND) operations that are integrated across the U.S. military’s networks may be needed to prevent Iran from using cyberspace as part of a broader strategy to impose costs on the United States.

Washington would further need, according to CSBA, to create pockets of air superiority:

During the opening stages of an air campaign against Iran, it would be important to establish “pockets” of air superiority sufficient to enable operations conducted within range of Iran’s air defenses. This could be a particularly challenging task if the U.S. Air Force lacks sufficient close-in fighter bases and the Navy is unable to operate its carriers within a few hundred miles of Iran. Moreover, future U.S. counter-air operations against an Iranian IADS may not constitute a “rollback” campaign in the traditional sense. Even though it is doubtful that Iran will field an IADS that approaches the sophistication of the PLA’s air defense network in the near-term, it should be assumed that Iran will seek to husband its most capable mobile SAMs so they can be used against U.S. aircraft later in a campaign, in a manner similar to that employed by the Serbian forces during the 1999 Kosovo War. Rather than conduct a determined defense of all potential high-value target areas, Iranian SAM operators could control their radar emissions, frequently change their locations, and use decoys and camouflage to avoid detection and create pop-up “SAM ambushes.” Similarly, Iran may choose to hide some of its fighters in hardened shelters located deep in its interior to prevent their early destruction.

To counter Iran’s “air defense network in being” tactics, the U.S. military could employ stealth platforms that are capable of avoiding detection, and use decoys and electronic warfare systems to spoof and goad enemy SAM operators into activating their radars and thus revealing their locations. DoD’s new Miniature Air Launched Decoy (MALD) would seem to be particularly well-suited for this mission. Even with these capability enhancements, the U.S. military should plan for a sustained effort to suppress air defense threats that may pop-up without warning throughout the course of an air campaign against Iran.

As already noted, the CSBA report is a little dated, but does give us a broad sense of what a U.S. military campaign against Iran would look like, along with possible responses. The size and scale of the campaign would of course be dialed up or down based on the goal. If America was attempting to damage Iran’s nuclear program, one would likely see a massive effort to degrade Tehran’s air defense networks to pave the way for B-2 bombers and other aircraft to drop large amounts of precision-guided and/or “bunker-buster” style weapons.

In the end, no one wants to see Washington and Tehran come to blows, but there is always a certain utility in analyzing what may seem like the unthinkable. Such a conflict would likely take on a global dimension, as Iran would utilize terrorist networks to strike U.S. assets around the world, with America striking back with increasingly lethal weapons of war.

In the end, the question America needs to square itself with is simply this: Can Washington live with an Iran that will become increasingly powerful in the Middle East after a nuclear deal is signed and on paper? If so, then Washington should prepare to compete with Iran across the Middle East while cooperating in areas of shared, mutual interest—just like it already does with China. America can work with allies like Israel, its gulf partners and others in containing Tehran’s growing missile program through expanded missile-defense partnerships, as well as beefing up various aspects of their conventional military capabilities if need be. If competition became especially heated, there are various ways to contain Iranian ambitions without engaging in war. However, if Washington wants to take a much more aggressive path (who knows what a new president in 2016 might do) or if Iran decides to cheat on some aspect of the deal, we are in for a long and bumpy ride in the Middle East for decades to come.