This Is How the U.S. Military Plans to Kill North Korea's Nuclear Missiles 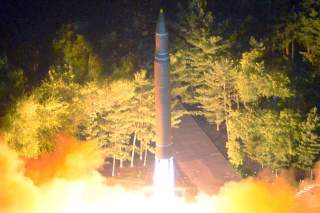 Given the North Korea threat, missile defense upgrades are progressing at a crucial time for the Pentagon’s Ground-Based midcourse defense. Following the completion of  current Pentagon review of nuclear weapons, policy and defenses, there is a distinct possibility that funding for missile defense technology will continue to climb.

The Pentagon’s next intercept test will incorporate new missile defense technology engineered to improve the likelihood that a Ground-Base Interceptor can succeed in destroying an approaching ICBM nuclear weapons attack.

Northrop Grumman is working with the Missile Defense Agency to refine new command and control systems able to exchange time-sensitive information with an interceptor kill vehicle to improve its ability to guide toward an attacking enemy ICBM.

The technology, which involves the integration of new components into data terminals and communications networks, is designed to increase reliability of the Pentagon’s Ground-Based Midcourse Defense (GMD) system and expedite the process through which sensors and data locate ICBM targets, Mark Thornton, Director of Missile Defense Systems Operating Unit, Northrop Grumman, told Scout Warrior in an interview.

While a Ground-Based Interceptor (GBI) travels into space to discern and destroy an ICBM, sensors and communications technology are needed to connect with the interceptor prior to engagement. While many of the details, sensors or RF technologies involved are, not surprisingly, unavailable for public discussion, there are a number of substantial cutting-edge improvements emerging quickly.

“We are replacing the GMD coms network with upgrades and a compressed footprint. We are making changes rapidly to put new devices into the network,” Thornton explained.

Command and control upgrades to missile defense technology continue to emerge as a key priority in budget and spending deliberations, according to many senior Pentagon leaders.

Given the North Korea threat, missile defense upgrades are progressing at a crucial time for the Pentagon’s Ground-Based midcourse defense. Following the completion of  current Pentagon review of nuclear weapons, policy and defenses, there is a distinct possibility that funding for missile defense technology will continue to climb.

In a recent appearance before the House Armed Services Committee, Defense Secretary Jim Mattis said additional decisions about prioritized missile defense spending will be made at the conclusion of the ongoing strategy review.

Also testifying before HASC, Missile Defense Agency Commander Vice. Am. J.D. Syring specified that large portions of the more than a proposed $7.9 billion 2018 MDA budget would be to support “integration of interceptors, sensors and the command, control, battle management and communications system” for missile defense.

As the industry deputy program manager for the GMD effort, Northrop is responsible for fire-control systems, command launch technology, command and control networks and a wide range of computer technology responsible for the launch of an interceptor.

Northrop is teamed with Raytheon, which makes the Exo-atmospheric kill vehicle and Boeing, which engineers the Ground-Based Interceptor.

Reducing the hardware footprint and accelerating processing speeds of GMD command and control systems is a key element of these upgrades. In total, modern computing technology has enabled Northrop engineers to compress nine racks of servers into a single rack.

“You can do a lot more in a single box these days than you could do in a single system. There is more processing power and capability in smaller packages than when we built the system years ago. The machines that run the core of our system were the size of a refrigerator,” Thornton said.

Having fewer hardware components on a GMD system - achieved through compression, smaller computing and data consolidation – is fundamental to improving the reliability of a Ground-Based Interceptor as it ignites and is guided into space.

Northrop engineers are in the process conducting a wide range of simulation exercises and ground tests to prepare the new components for an upcoming MDA intercept test.

The precise timing of the next test is not yet specified, however it is likely to be of great significance given that a Pentagon GBI succeeded in destroying an incoming ICBM target in space for the first time – just within the last few months.