How the U.S. Military's "Sea Hunter" Could Completely Terrorize Russia and China on the Water 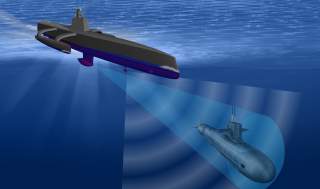 The Navy is expanding the mission portfolio of its emerging submarine-hunting drone ship so that it can conduct surface warfare missions, fire weapons and launch electronic attacks.

The Navy is expanding the mission portfolio of its emerging submarine-hunting drone ship so that it can conduct surface warfare missions, fire weapons and launch electronic attacks, service developers said.

The Sea Hunter can be controlled by a human “tele-operator” able to maneuver the ship with a joystick. However, the progress of the platform’s technology, and the rapid advancements of algorithms enabling greater levels of autonomy, have inspired the Navy to begin thinking about additional missions for a drone that was initially conceived as a sub-hunting vessel.

“Right now, the sky is the limit, but, before we even get to that, we need to be able to have a more autonomous system that can steer and reposition itself,” Capt. Jon Rucker, program manager, Unmanned Maritime Systems, PEO LCS, told reporters Jan. 10, at the Surface Naval Association, Arlington, Va.

The ship is built to travel up to 10,000 miles while using sonar and other sensors to locate mines and even the quietest enemy submarines.

The Sea Hunter’s high-frequency sonar can send acoustic “pings” into the ocean before analyzing the return signal to determine the shape, size, speed and characteristics of any undersea enemy activity.

The idea is to track them, if necessary, over a period of months so they are compelled to stay away from strategically vital areas.

As technology evolves, the Navy plan is to rapidly migrate the system from something that is tele-operated to something that can increasingly perform a wider range of functions without needing human intervention.

“We are not yet at the point where we don’t have an operator supervising it,” Rucker explained.

Progress with the Sea Hunter will also involve replacing a turret on top of the drone with a range of sensors for ISR, surface-oriented technologies, weapons and electronic warfare systems, Rucker said.

“It will have an ability to work with the surface force, do command and control and go investigate,” Rucker added.

If the Sea Hunter is both more autonomous and armed with lethal weapons in the future, it will be engineered to align with current Pentagon doctrine which says any use of lethal force must hinge upon a human decision-maker in the role of command and control.

The Pentagon’s research arm is also extending testing of its sub-hunting drone able to travel autonomously for up to 90 days using sensors and sonar technology to search for enemy submarines and other airborne and undersea threats such as mines.

At the end of last year, DARPA awarded an $8.5 million contract extension to Reston, Virginia-based Leidos for continued test phase development of the ACTUV program.

Testing of the sea drone is designed to demonstrate the capability of the ACTUV system to use its unique characteristics to employ non-conventional sensor technologies that achieve robust continuous tracking of the quietest submarine targets, a statement from DARPA ACTUV Program Manager Scott Littlefield said.

DARPA officials also say the objective of the ACTUV program is to generate a vessel design that exceeds state-of-the art platform performance to provide propulsive overmatch against diesel-electric submarines at a fraction of their size and cost.

Picking up the quiet hum of a battery-powered, diesel-electric submarine in busy coastal waters is “like trying to identify the sound of a single car engine in the din of a major city,” Rear Adm. Frank Drennan, commander of the Naval Mine and Anti-Submarine Warfare Command, stated on the Leidos website.

The ACTUV’s use of sonar is also designed to limit risks to the marine ecosystems and undersea life such as whales.

The submarine-hunting drone ship was christened this past April, and, according to a recent story in Defense Systems, recently tested its first payload. (Defense Systems Story HERE)

“The first payload deployed by the unmanned ASW (anti-submarine warfare) ship was its Towed Airborne Lift of Naval Systems (TALONS) sensor suite, which carries ISR sensors up to altitudes ranging from 150 to 1,500 feet,” a report in Defense Systems by George Leopold explains.

Using an airborne platform can further expand the mission set of the drone ship by integrating additional surface and air-oriented ISR assets.