How the US Navy Can Crush the Biggest Threat to Its Aircraft Carriers: Enemy Submarines 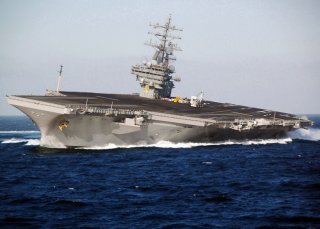 The United States Navy will need to develop an organic carrier-based fixed-wing anti-submarine warfare (ASW) capability to counter the resurgent threat from enemy submarines. The Navy simply does not have enough attack submarines (SSN), cruisers, destroyers or helicopters to adequately protect the its deployed forces from subsurface threats because its ASW capability has atrophied since the end of the Cold War.

“It’s a growing threat that will almost certainly influence the relevance of the carrier,” said retired U.S. Navy Capt. Jerry Hendrix, director of the Defense Strategies and Assessments Program at the Center for a New American Security. “The Navy will need a new platform to replace the retired S-3 Viking.”

Hendrix said that there are several options that the Navy could pursue. One option would be to bring the S-3 Viking back into service. Hendrix noted that some of the venerable sub-hunters were retired with plenty of life left on the airframe. The Navy could also develop a follow-on S-4—in a manned/unmanned or straight unmanned configuration. Or, the service could opt to build a follow-on to the developmental MQ-25A Stringray unmanned aerial refueler that could serve as an ASW platform. But whatever the platform, it would have to have long endurance and the ability to rapidly climb and descend to get into position to track and attack an enemy submarine.

Bryan McGrath, managing director of the FerryBridge Group naval consultancy, also favored the unmanned option. “Some kind of Medium Altitude, Long endurance (MALE) UAV with data links back to a surface based (CVN or escort),” he wrote in an email to The National Interest. “Couple it with a VLS [vertical launch system] launched quick response weapon in the 75-100 nm range. Missile based with a torpedo/depth bomb on the end. Quick to get out there and put the sub on the defensive.”

Another option would be to convert the Bell-Boeing V-22 Osprey—which the Navy is already buying—into an ASW platform. McGrath said that the aircraft does not have the range or endurance for the ASW mission, but Hendrix said that it might be a workable if imperfect solution. “Yes, but it could not be a roll-on roll-off package,” Hendrix said. “The equipment is too specialized and too fragile to be cycled in and out and remain effective. Things like sonobuoy launch tubes have to be permanently installed and acoustic processors are very sensitive.”

But one way or another, the Navy will have to address the ASW problem since submarines are by far the most fearsome threat any surface ship faces. While enemy anti-ship cruise and ballistic missiles might be able to disable—or otherwise deliver a ‘mission kill’—a nuclear-power aircraft carrier like the U.S. Navy’s Nimitz or Ford-class flattops, submarines armed with heavyweight torpedoes such as the Russian 533mm or 650mm waking-homers are among the only threats that can actually sink the massive vessels. “The DF-21 ballistic missile is really designed to get a mission kill on a carrier by dropping bomblets over the flight deck, for example. Anti-ship cruise missiles can also do a lot of damage to the superstructure,” Hendrix said. “But a torpedo properly placed under the right part of the keel is one of the few things that can actually flat out sink an aircraft carrier.”

Heavyweight torpedoes don’t necessarily have to make physical contact with the hull, rather the weapons explode under the hull causing a massive vacuum. As the massive bubble rises, it lifts the vessel out of the water, before dropping it—effectively breaking the target ship’s back. Hendrix noted that during the battle of Midway, the storied carrier USS Yorktown (CV-5) was finally finished off by Japanese submarine-launched torpedoes. Thus, while anti-ship ballistic and cruise missiles often garner the lion’s share of the attention, some of the deadliest threats faced by the carrier come from under the sea in the form of torpedoes.

Particularly troublesome are Russian-designed waking homing torpedoes that are generally immune to most counter-measures—and are often an overlooked threat. More problematic is the fact the Moscow has proliferated those weapons to any nation that can afford to purchase a Kilo-class diesel-electric submarine. Those vessels, which are nearly undetectable in shallow littoral waters, could lie in wait for a carrier or its escorts—ambushing a U.S. Navy strike group with little to no warning.

The Navy has started developing anti-torpedo torpedo defensive systems to counter waking homing torpedoes. The service had tested such defensive systems onboard USS George HW Bush (CVN-77), however it is not clear if the system is effective. Nor is it clear if such defenses have been fielded. “Waking homing torpedoes aren’t a new threat,” Hendrix said. “We’re dealt with them before, and we continue to deal with them. They’re not going away.”