This Is How the U.S. Navy Plans to Crush China and Russia's Air Defenses 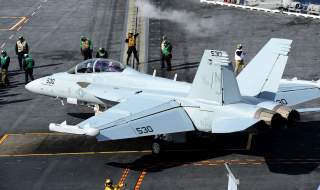 The Naval Air Systems Command (NAVAIR) has completed a critical design review for the first increment of the Next Generation Jammer (NGJ).

The new Raytheon-built AN/ALQ-249 jammer will be an essential tool for the Navy’s Boeing EA-18G Growler fleet to counter the growing threat from advanced Russian and Chinese-built air defenses such as the S-400 and HQ-9. The existing 40-year-old ALQ-99 jammers are not particularly useful against those advanced threat systems.

“The Airborne Electronic Attack Systems and EA-6B program office (PMA-234) completed a critical design review (CDR) for the AN/ALQ-249 Next Generation Jammer (NGJ) Increment (Inc) 1 Mid-band program at Naval Air Station Patuxent River, Maryland, in late April,” reads a NAVAIR statement. “During CDR, it was determined that the design and development are on track to meet crucial warfighter requirements, and fabrication, demonstration and test could proceed.”

With the CDR completed, the Raytheon and Boeing—which will be responsible for integrating the new system onto the Growler—will move into the final design and fabrication phases of the program. “The system is now in the Engineering and Manufacturing Development phase with Raytheon Space and Air Systems, the pod prime contractor, and Boeing, the EA-18G GROWLER aircraft integration prime contractor,” NAVAIR states. “The AN/ALQ-249 NGJ Inc 1 Mid-band capability, once fielded, will transform the way the U.S. Navy conducts electronic warfare.”

The new jammer—which uses Gallium Nitride-based phased arrays—is many times more capable than the existing ALQ-99 pods. With its electronically scanning and ability to use novel jamming techniques, the open-architecture NGJ will be a formidable addition to the Growler’s arsenal.

That’s especially true when the NGJ is combined with advanced datalinks such as the Tactical Targeting Network Technologies (TTNT) that can move information many times faster than the current Link-16. “The system will address the emerging, advanced threats and increased threat density using the latest Active Electronically Scanned Array, also known as AESA, digital and software-based technologies,” the NAVAIR statement reads.

The first NGJ increment is scheduled to become operational by 2021. But the Navy is already starting to look at follow-on increments that would deal with threats in the low and high bands. Increment 2, which is likely to be fielded in the late 2020s, will be designed to jam low-frequency early warning radars that can detect stealth aircraft. The third increment will be designed to engage high frequency fire-control band radars. Together, the three versions of the NGJ pods will form a complete set of jammers—much like today’s ALQ-99—but with fewer, but much more capable pods.

The NGJ program is a high priority for the fleet as advanced air defense like the S-400 and HQ-9 proliferate. Thus, the new jammer can’t be operational too soon.