This Is How the U.S. Navy Plans to Deal with Enemy Missiles (Think China) 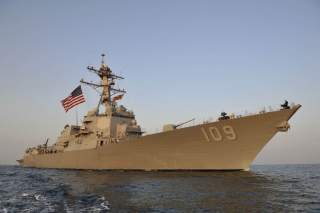 The Navy is building and testing a fleet of upgraded DDG 51 Arleigh Burke-class destroyers with a series of next-generation technologies -- including an ability to detect and destroy incoming enemy anti-ship cruise missiles at farther ranges from beyond the horizon.

“NIFC-CA presents the ability to extend the range of your missile and extend the reach of your sensors by netting different sensors of different platforms -- both sea-based and air-based together into one fire control system,” Capt. Mark Vandroff, DDG 51 program manager, told Scout Warrior in an interview.

The NIFC-CA system successfully intercepted a missile target from beyond the horizon during testing last year aboard a Navy destroyer, the USS John Paul Jones. The NIFC-CA technology can, in concept, be used for both defensive and offensive operations, Navy officials have said. Having this capability could impact discussion about a Pentagon term referred to as Anti-Acces/Area-Denial, wherein potential adversaries could use long-range weapons to threaten the U.S. military and prevent its ships from operating in certain areas -- such as closer to the coastline. Having NIFC-CA could enable surface ships, for example, to operate more successfully closer to the shore of potential enemy coastines without being deterred by the threat of long-range missiles.