How the U.S. Navy Plans to Kill Submarines from Russia, China and North Korea 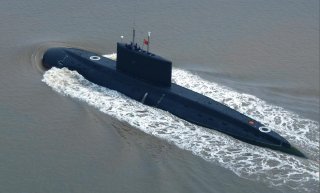 The new sensor, designed for combat and surveillance missions in littoral waters, is called the Coastal Battlefield Reconnaissance and Analysis, or COBRA.

COBRA’s primary function is detecting mines and submarines while keeping the LCS and its crew at a safe distance.

Given that the Navy's Littoral Combat Ship is engineered to use its shallow draft, speed and maneuverability to conduct combat operations in littoral waters near enemy coastlines, having an improved technological capacity to find and detect enemy mines and submarines near the surface expands its mission envelope and provides needed protection for offensive ship operations.

Having a small helicopter detachment able to launch and land off the back of the LCS is a key part of the Navy's emerging strategy for surface warfare, countermine warfare and anti-submarine warfare.

The Fire Scout has been both deploying and conducting training missions on board Navy Littoral Combat Ships for several years.

The Navy is also integrating a new maritime search radar to its larger Fire Scout variant - the MQ-8C in order to extend its ISR capacity and provide better targeting support to nearby offensive operations.

The existing electro-optical and infrared cameras on the Fire Scout have a range of six-to-ten miles, whereas the new maritime radar can find targets at ranges out to 80 nautical miles, service officials explained.

"The effort covered in this contract will integrate a maritime radar onto the platform to provided increased situational awareness for surface combatant ships. The radar is already mature since it is in production for other platforms and represents a lower risk pathway to bring this capability to the Fleet," Dodge added.

The Fire Scout is engineered to work in tandem with MH-60R helicopters to identify and destroy targets as part of a maritime strike squadron.

The helicopter and unmanned aircraft system, working with one another, are designed to extend the range of the shallow-water LCS. They provide ISR, targeting and threat-detection technologies miles away from the ship and its crew, using a data link to send information back to a control station on-board the ship.The Fire Scout’s flat-panel electronically scanned array radars ad Link 16 network integration.

The helicopter squadron provides a persistent over-watch for shipping traffic, threats and other potential targets. The MH-60 provides initial surveillance and situational awareness. Once something of concern it discovered, the Fire Scout can provide persistent surveillance capability to the ship and to the squadron, service developers explained.

The 31-foot long Fire Scout can fly at airspeeds up to 110 knots and reach altitudes of 20,000 feet; the aircraft weighs 3,150 pounds at its maximum take-off weight and is powered by one Rolls-Royce heavy fuel turboshaft engine, Navy officials said.

The MQ-8B Fire Scout can stay up on a mission for up to five hours and also uses Automatic Identification System, or AIS, technology to help locate and identify ships.

The Navy currently has more than 20 MQ-8B Fire Scouts in the inventory, service officials said.

Also, in recent years, the Navy has armed the Fire Scout with laser-guided precision rockets as part of an assessment for future integration. The weapons tested on the Fire Scout laser-guided 2.75 inch, folding-fin rockets called Advanced Kill Precision Weapons System, or APKWS.