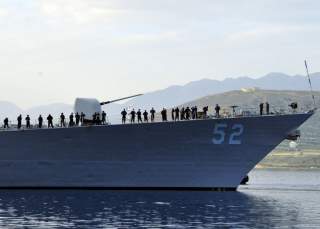 The United States Navy is conducting exercises with the South Korean Navy as part of a continuing effort to deter North Korea.

As part of the combined exercise, the U.S. Navy deployed USS Spruance (DDG 111), an Arleigh Burke-class guided-missile destroyer, to work alongside South Korean naval assets to conduct anti-submarine warfare drills. While Pyongyang’s naval forces are relatively unimpressive, the nuclear-armed Stalinist dictatorship has recently tested a submarine-launched ballistic missile and has previously used midget-submarines to infiltrate the Republic of Korea. In 2010, a North Korean midget submarine sank a South Korean Pohang-class corvette—Cheonan—with a torpedo in an unprovoked attack.

“This operation showcases the unwavering strength and resolve of the U.S. and ROK navies,” said Rear Adm. Brad Cooper, commander of U.S. Naval Forces Korea and Task Force 78 in a statement issued on Sept. 26. “We work side-by-side with our ROK partners every day; we are by their side today at sea, and we will remain by their side to defend against North Korea’s unprovoked acts of aggression.”

The exercise comes on the heels of North Korean nuclear and ballistic missile tests.

"Our ROK-US alliance will counter the North Korean nuclear development and SLBM threats with determination,” said Vice Adm. Lee, Ki-sik, commander of the Republic of Korea Fleet in a Sept. 26 statement.

Republic of Korea Navy (ROKN) Aegis destroyers, submarines, anti-submarine helicopters as well as U.S. and ROKN P-3 maritime patrol aircraft, are joining USS Spruance on the anti-submarine warfare exercise. According to U.S. Pacific Command, the exercise is meant to highlight the unified defensive naval force capabilities of the Republic of Korea and the region from surface, subsurface, and ballistic missile threats.

But moreover, with their powerful SPY-1D radar and Aegis combat systems, the Arleigh Burke-class is one of the most formidable weapons that can be used to counter enemy ballistic missiles. The South Korean Navy also operates Aegis destroyers—based on the Arleigh Burke-class— and hopes to acquire a ballistic missile defense (BMD) capability for its vessels. In time, the South Korean vessels will be upgraded to the latest Aegis Baseline 9 capability and will be able to launch Raytheon SM-3 BMD interceptors. That should afford Seoul formidable defensive capabilities to defeat Pyongyang’s growing arsenal of ballistic missiles—some of which are likely to be nuclear-tipped.

Meanwhile, South Korea has also agreed to allow the United States Army to deploy a Terminal High Altitude Area Defense (THAAD) anti-ballistic missile unit to the Korean peninsula. While the deployment would definitely counter any North Korean missile attack, the placement of such weapons on the Korean peninsula has raised concerns in Beijing and Moscow—both of which oppose such a deployment.