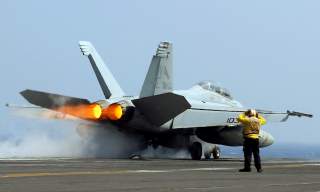 “Never in the field of human conflict was so much owed by so many to so few,” Churchill said in an August 1940 speech.

Seventy-seven years later, U.S. Navy aviators and sailors have their own singular burden to bear as they support Operation Inherent Resolve, the U.S.-led coalition against the Islamic State in Syria and Iraq.

In this war, a single misstep born of a split-second decision during combat operations—both in the air and at sea—could cost hundreds of innocent lives, or perhaps even precipitate a shooting war between the U.S. and Russia.

The Daily Signal was aboard the USS George H.W. Bush aircraft carrier during combat operations in support of Operation Inherent Resolve.

As the Islamic State, the terrorist army also known as ISIS, loses territory, the myriad military forces arrayed against it are converging. The battle space, consequently, is increasingly crowded, and U.S. forces and the local groups partnered with them on the ground are more frequently brushing up against the Russian and Syrian regime militaries.

Meanwhile, at sea in the eastern Mediterranean, U.S. warships supporting Operation Inherent Resolve are interacting with the Russian navy in ways not seen since the Cold War.

“As the area gets more and more constricted, as Russian forces and pro-regime Syrian forces as well as U.S. forces and forces that the U.S. backs start moving tighter and tighter into other areas, then that deconfliction will have to be worked out,” Rear Adm. Kenneth Whitesell, commander of Carrier Strike Group Two, told The Daily Signal in an interview.

“There is no desire to militarily escalate the situation,” Whitesell said. “It basically comes down to our training. We trust their training, and we assume that [the Russians] trust our training, too. They are not the enemy. ISIS is the enemy.”

The air war over Syria is one of most complex that U.S. Navy aviators and sailors have ever faced. Aviators are on guard against air-to-air threats while they exercise a close air support mission honed from 16 years of post-9/11 counterinsurgency operations. While at sea, sailors dust off Cold War-era tactics to deal with increasingly bold and persistent run-ins with Russian warships.

At stake every day are U.S. strategic interests, the fate of ISIS, and the lives of civilians caught in the crossfire. Also, the durability of peace between the world’s top two nuclear powers hinges on the coolheadedness and judgment of U.S. military personnel.

“We spend about a year training before we deploy. And those trainings will go from diverse air-to-air scenarios to close air support,” Capt. James A. McCall, commander of Carrier Air Wing Eight, told The Daily Signal in an interview.

“So, I think our guys are well-postured,” McCall said. “They understand their airframe and they understand how to distill commander’s intent and mission orders into the employment of aircraft on a daily basis in a pretty complex battle space and make decisions that are really life and death, and frankly have strategic impact to our country.”

The USS George H.W. Bush aircraft carrier is on its third deployment, and the second in support of Operation Inherent Resolve. The sailors refer to the ship as “the Bush,” although their commanders discourage that nickname.

The George H.W. Bush was commissioned on Jan. 10, 2009. It’s the 10th and last of the Nimitz-class carriers, which date back to 1975. The ship is 1,092 feet in length—about as long as the Empire State Building is tall. Two nuclear reactors with enough fuel for 20 years provide power. Despite its massive size (more than 200 feet longer than the Titanic), the carrier boasts a top speed in excess of 30 knots (about 35 miles per hour).

The carrier is a veritable city at sea. It towers 20 stories above the waterline, displaces about 97,000 tons, and the flight deck comprises 4 and a half acres. Roughly 5,000 sailors are on board, along with 80 aircraft.

Most of the F/A-18 Hornet and Super Hornet strike fighters that launch from the deck of the USS George H.W. Bush are loaded with live munitions—both air-to-air missiles and precision bombs. Almost all the jets are adorned with a few rows of small bomb symbols painted beneath the canopy rails, a testament to the combat history of each aircraft. There are also EA-18G Growlers on board, which have the same airframe as the Hornet but wield an electronic warfare suite instead of kinetic weapons.

To the uninitiated observer, flight deck operations are orchestrated chaos. It’s loud and confusing as the Hornets and Growlers advance one-by-one to the catapults. There, the planes stop, and the green shirts attach the catapult shuttle to the front landing gear.

The blast deflectors are raised. A few checks, some hand signals. The green shirt runs away from beneath the landing gear to get clear and then gives a thumbs up. Now, the engines spool up to full power. The pilot scans the flight instruments and engine readings. All good. The afterburners crackle and roar. The aircraft settles into its landing gear struts against the shackled thrust of the engines. The pilot salutes, then braces for the squeezing G-forces of launch.

The yellow shirted “shooter” lunges like an attacking fencer, the signal for launch. One second, maybe two later, the warplane lurches forward with the initial kick of the catapult and then accelerates straight and smooth from zero to 184 miles per hour in just two seconds before rocketing off the edge of the flight deck. The airborne jet slides straight away, maintaining the level of the deck for a beat before it climbs, the afterburners’ fire glowing behind.

Then, the whole process repeats itself, again and again, until the catapults clear out and it’s time for the landings. The planes come in at a steady rhythm. Once they hit the deck, the drooping tail hook catches the arresting wire. The deceleration from an approach speed of 155 miles per hour to a full stop happens in about 320 feet.

Amid the awesome spectacle of carrier flight deck operations, there are subtle clues that this is a ship at war. The bomb symbols painted on the sides of the jets, for example. Or, the fact that some of those Navy warplanes coming back to land on the George H.W. Bush are missing a bomb or two from their wing pylons. A quiet reminder that many of the ship’s daily launches and landings are not for training—they are for combat. Each day, in fact, the ship averages between 16 and 24 combat sorties.

These pilots and the warplanes they wield are the leading edge of America’s ongoing air war against ISIS—and they kill the enemy every day.

“We’re rooting out an enemy that needs to go away, and I think the administration’s been very clear that our job is to annihilate them, and that’s why we’re here and why we’re doing it,” McCall, the Carrier Air Wing Eight commander said.

After nearly three years, U.S. military pilots such as those operating off the George H.W. Bush continue to wage a relentless air war against ISIS from over the skies of Syria and Iraq. The terrorist army is on its heels. Its stronghold of Mosul is lost. And Raqqa, its de facto capital, is under siege.

ISIS has largely lost freedom of movement in the open, exposed expanses of Syria and Iraq where its fighters are easy prey for U.S. and coalition warplanes and the “unblinking eye” of intelligence, surveillance, and reconnaissance (ISR) aircraft.

U.S. pilots say the coalition has the battlefield momentum and ISIS is in its death throes—but the war is not over.

“They’ve been resilient from the beginning, and they just find new ways to stay resilient,” Rogers, the F/A-18 pilot, told The Daily Signal. “So it’s taken a concerted effort, both by the guys on the ground as in the air to make sure that the right targets are being hit.”

As ISIS is squeezed out of Raqqa, its leadership is moving south down the Euphrates River valley to re-establish its forces in the Deir ez-Zor and the Tal Afar areas.

After three years under pressure from the U.S.-led air campaign, the terror group has lost more than two-thirds of the territory it held in 2014, when Operation Inherent Resolve began. And, according to U.S. officials, more than 60,000 ISIS fighters have died in combat since 2014.

In the summer of 2015, the war against ISIS was at a macabre equilibrium. The U.S.-led coalition was killing about 300 ISIS fighters a week, roughly the same rate at which the terrorist army was able to recruit new fighters. Now, recruitment has slowed as the militants’ losses continue to mount.