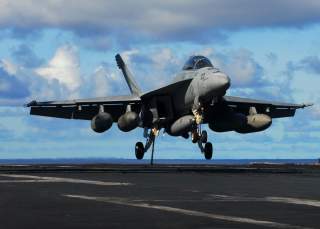 The new upgraded long-wave infrared search and track system will afford the Navy the capability to detect and track new adversary stealth aircraft such as the Chinese Chengdu J-20 or the Russian Sukhoi Su-57 PAK-FA at extended ranges. It also affords the carrier air wing a type of sensor that cannot be disrupted by increasingly capable enemy electronic warfare systems.

"We are excited to implement the Block II upgrades and enhance IRST21's performance."

According to Lockheed, the two Block II contracts provide up to $100 million for developing advanced software, performing hardware upgrades and delivering prototypes.

The ability to engage stealthy airborne targets is one of the Block III’s selling points and should keep the Super Hornet relevant into the 2040s.

“That IRST sensor is a key capability Super Hornet brings to the carrier air wing that nobody else has,” Dan Gillian, Boeing’s F/A-18 and EA-18G program manager told The National Interest earlier this year.

“It is a counter-air, counter-stealth targeting capability.”

Unlike Boeing’s previous Advanced Super Hornet concept that made its debut in 2013, the new Block III aircraft is a more modest proposition that is designed to support the rest of the air wing including the Lockheed Martin F-35C Joint Strike Fighter, Northrop Grumman E-2D Advanced Hawkeye and the EA-18G Growler under the service Naval Integrated Fire Control Counter Air construct (NIFC-CA).

It is becoming increasingly apparent that the F/A-18E/F will be serving in the fleet until at least 2040. As such, the Navy has requested funding for the advanced Block III version of the venerable Super Hornet in the 2018 budget. Many of those modifications are also likely to be used onboard the EA-18G Growler variant too.

If the Super Hornet is still in service in the 2040s, it would be a remarkable feat for an aircraft that was designed as an interim stopgap after the Navy’s McDonnell Douglas/General Dynamics A-12 Avenger II was and cancelled and other naval aviation modernization efforts of the early 1990s such as the NATF, A-X and AF-X came to naught.