How the U.S. Should Respond in the South China Sea: Build Its Own Islands 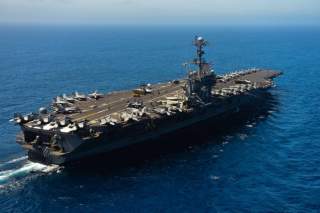 The Permanent Court of Arbitration's decision places more pressure on the U.S. than China, as Washington must now act to support this emphatic judgement. Failure to do so will further weaken America's credibility, and undermine the rules-based order it seeks to preserve.

In order to determine how the US may effectively respond, China's strategy must be understood.

In recent years a number of high profile strategists have described China's South China Sea (SCS) encroachment as 'salami tactics'. In The Interpreter, Derek Lundy eloquently explained what is meant by this (though none will eclipse this gem from Yes Prime Minister). Indeed, the depiction of China's approach in the SCS as 'salami tactics' is now a widely accepted norm.

Nevertheless, this is contestable. In my view China is not employing salami tactics at all, but rather a wholly different strategy. This challenges a consensus, and requires a substantive explanation.

To my mind, there are three pre-conditions that need be met for a salami strategy to be employed:

- and effective military options without serious escalation are clearly limited.

On all three counts the SCS fails.

First, while the SCS is claimed by China as sovereign territory, it is not by the U.S. In the case of the latter, the concerns are expressed in terms of freedom of navigation and the rule of law. There isn't any slicing – China claims the whole of the SCS and is taking strategic steps to enforce that claim.

Contrast this with say, the Berlin blockade, where the Soviet Union was overtly attempting to 'slice' a piece of influence, and it's immediately apparent the SCS is quite different. A modern comparator is the Senkaku islands. The US has explicitly included these islands in its alliance commitment to Japan, therefore the Senkaku/Diaoyu island dispute would meet this first criterion.

With regard to the second requirement, there is remarkably little evidence that China is carefully calibrating. Its island reclamation activities have total disregard for how the US might respond, with Beijing taking as given that Washington will cede the strategic space. This is not salami slicing but expressly challenging; the only constraint is American power, not American wrath.

Again, there are plenty of alternative examples for comparison. North Korea's provocations are innumerate, but they are carefully measured. The regime makes sure that while these actions are sufficient in scope to get the world's attention, they are not severe enough to incur a decisive response.

Finally, unlike many flashpoints, America's military options in the SCS are not especially limited. If, for some reason, America perceived China's reclamation as a direct and immediate threat, the US could render those islands inoperable without difficulty. Moreover, the initial objectives would be achieved without a wider conflict, even though escalation may be China's response.

Contrast this with Ukraine, the best example of salami tactics today. Any attempt by NATO to expel Russia from Ukraine militarily would require a massive escalation of an ongoing conflict, carrying immense risk and with great uncertainty over whether the core objective would be achieved.

These distinctions are important, as framing China's actions in the SCS as 'salami tactics' will lead to ineffective policy responses. Accordingly, our apprehension of China's strategy in Asia needs rethinking.

At risk of oversimplification, the respective grand strategies of the major powers may be summed up as follows: The United States plays poker, the Russians chess, and the Chinese — Go.

Poker is based on ambiguity and incomplete information. To that end the nuclear age was made for the Americans. In Europe, the US convinced the Soviets they held pocket aces and would go all-in to defend Europe. This seemed credible. After all, the loss of Western Europe would pose such an existential threat to America that a nuclear war could be initiated to prevent it. To sell the message, the US barrelled the pot with forward deployed bombers and artillery units. The bet was never called, and the Russians ultimately folded.

But this doesn't work in the Asia Pacific. It's hard to sell the idea that China's expansion in the South China Sea poses an existential threat to the US, and distant offshore deterrents don't look like aces. In other words, if the Americans go all-in against China, they're going to be called.

Meanwhile, chess is for the Russians – and salami tactics is for chess players. That is, to play a closed game, gain space through positional play, and gradually improve your freedom of action at the expense of your opponent.

But the Chinese are not playing chess, they're playing Go. The vast majority of China's land borders have been settled, while Beijing rapidly lays stones in the SCS. Given the asymmetric objectives between China (gaining territory) and the U.S. (preserving the existing order), 'flexible response' approaches will not be effective.

So how should the US respond to China's advances in the South China Sea, preferably without hegemonic war?

The U.S. must adjust its strategy and build its own islands in the South China Sea. This has multiple advantages over alternative courses of action, and is the only option likely to be effective long-term. Indeed, it is probably the only response that China will understand.

In the wake of the PCA ruling, now is the perfect time. Washington should undertake land reclamation on behalf of the Philippines, and do so under the auspices that the matter has been settled under international law.

No doubt many will advocate other approaches being exhausted first but, just as with Go, by the time the danger becomes obvious it may well be too late. At which time, America will be praying that its weak 7♠ , 2♥ holding somehow manages to win.

This first appeared in The Lowy Interpreter here.