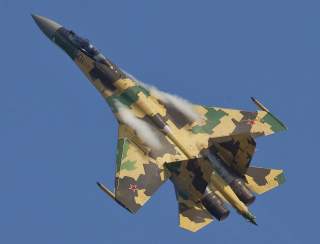 Russia hopes to upgrade its fleet of Sukhoi Su-35S Flanker-E multirole fighters based on experience gained operating in Syria this year.

As with almost all new aircraft—even those with otherwise excellent designs—minor but vexing flaws are often be discovered during high intensity real world operations. In this case, the Russian Air Force is correcting relatively minor issues that cropped up while operating in austere conditions in Syria.

"This year’s aircraft will be upgraded based on all the drawbacks and the Syrian experience," Russian deputy defense minister Yuri Borisov told the Moscow-based TASS News agency during a visit to the Gagarin aircraft plant in Komsomolsk-on-Amur on June 5.

According to TASS, one of the main modifications is to a set of screens in the Su-35’s inlets that are designed to prevent the ingestion of foreign object debris (FOD).

In this case, “small stones” were being ingested by the aircraft—which could seriously damage the jet’s twin Saturn AL-41F1S engines. Unlike most Western jets, Russian—and Soviet aircraft before them—are typically designed with inlet screens that are designed to allow them to operate from austere airfields.

It’s not surprising that the Russian Air Force discovered minor issues with the Su-35 and the other aircraft that it deployed to Syria. Indeed, such discoveries are typical for all aircraft types in every air force.

“There is no better stress test for a new aircraft than sustained flight operations,” Mike Kofman, a research scientist at the Center for Naval Analyses specializing in Russian military affairs, told The National Interest.

“The expeditionary setting no doubt places added pressure on the maintenance and support crew.”

Other than the inlet screens, the Su-35 might also receive some minor tweaks to its avionics hardware and software—particularly those systems pertaining to air-to-ground missions.

“Basically as I understand it, there were just some small problems which emerged during the intense combat use during the war,” Vasily Kashin, a senior fellow at the Center for Comprehensive European and International Studies at Moscow’s Higher School of Economics told The National Interest.

“Since the aircraft was employed for ground strike missions—more with smart weapons and dumb bombs—there can be some modifications for software and systems responsible for ground attack.”

The Russian Air Force is more or less satisfied with the Su-35S, thus there are no immediate plans to upgrade the aircraft with major new systems like an active electronically scanned array (AESA) radar.

“There will be no AESA,” Kashin said.

“They have a very powerful PESA [Passive Electronically Scanned Array] radar and it is considered to be the strong point.”

What the Russian Air Force does need, however, are targeting pods similar to the Lockheed Martin Sniper or Northrop Grumman LITENING pods. Right now, only the Sukhoi Su-34 Fullback bomber has a decent air-to-ground electro-optical/infra-red targeting capability with a built-in system called Platan. The Su-30SM and the Su-35 have to rely on their radars for targeting air-to-surface targets because of the lack of suitable targeting pods.

“The lack of pods is considered to be a major weakness of the Russian Air Force,” Kashin said.

The Russians are developing indigenous pods after plans for co-development with France fell through. Indeed, for a time, the Russians had intended to license produce the Thales Damocles pod.

“There is a targeting pod development program which started even before Syria, but no results yet,” Kashin said.

“As I understand, before the sanctions there were plans for cooperation with France. So later the plans changed, not the Russian pods are still being tested.”

It’s not clear when Russia’s indigenous targeting pods might be fielded.

“Could be soon, could be another endless saga,” Kashin said.