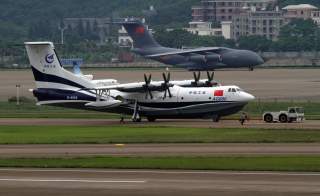 On December 24, China test flew the largest amphibious plane currently in production—the thirty-seven-meter long AG600 Kunlong or Jiaolong ( “Water Dragon’). Powered by four WH6 turboprops rated at 5,100 horsepower, the Jiaolong reportedly has maximum take-off weight of fifty-nine tons (it’s thirty-five tons empty), a maximum speed of 350 miles per hour, and a range of 3,000 or 3,500 miles. And of course can land on both land and water.

You can see the airliner-sized seaplane’s maiden flight at Zhuhai here.

According to manufacturer Aviation Industry Corporation of China (AVIC), the Water Dragon will be used for search-and-rescue (SAR) missions at sea, as well as firefighting—leveraging the large aircraft’s ability to scoop up to twelve tons of water in a matter of seconds, and deliver up to thirty such loads over twelve hours.

AVIC is also keen to play up potential exports of the AG600, noting potential buyers in Malaysia and New Zealand. However, the seaplane market remains small, and most analysts find it unlikely that China would pursue such an expensive project if it did not have military application.

Certainly, way back in the 1930s and 40s seaplanes were key strategic assets. Then, legendary aircraft such as the amphibious PBY Catalina and the Short Sunderland flying boat not only possessed the long range to search for enemy fleets, hunt down submarines, and serve as bombers in a pinch; they also could transport key personnel and vital supplies to far flung outposts and less developed countries that lacked the long, paved runways necessary to receive heavy cargo planes.

Especially for lengthy trans-oceanic flights, the seaplanes could land at remote islands for refueling, allowing them to traverse across the globe, as illustrated in the neat travel sequences in the ‘Indiana Jones’ films. Indeed, the expansion of Pan Am flying boat facilities into South America and across Pacific islands to Asia was key to expanding the United States’ reach as a global power.

However, by the 1950s, long, paved runways had significantly increased, as had the range and loiter time of ground-based transport and patrol planes. Seaplanes were mostly rendered obsolete. So why would China bother with something as anachronistic as a mega-amphibious plane today?

Beijing has been building up its presence on remote islands in disputed waters of the South China Sea—or in many cases, has literally built artificial islands in the middle of the sea. These islands host government facilities and even military garrisons, some of which are packing serious firepower.

But many of the islands China has staked a claim to are hundreds of miles from its mainland—and most are too small for, or otherwise lack, long runways that can receive large, long-distance transport planes.

Therefore, bring on the flying boats! The AG600 can land in water only eight feet deep, and could prove highly useful for maintaining logistical links with island outposts that were previously accessible only by helicopter or boat. Doing so is no trivial matter. An excellent New York Times article showcased what a lack of reliable supply lines means while following a squad of Philippine marines deployed on a rusting, grounded landing ship in Ayungin Shoal—directly across from a much larger and better provisioned Chinese outpost.

Another likely—and quite traditional—role for the AG600 would be long-range maritime patrol. While the PLA Navy already possesses ground-based maritime patrol planes, the AG600 could stage from farther flung island outposts to extend that patrol distance, and tracking ship movements deeper in the Pacific.

A maritime patrol variant would at a minimum involve the addition of a surface-search radar dome and datalinks to transmit sensor data to friendly forces. It could also sport anti-submarine warfare equipment to help it detect and track submarines, a mission which the U.S. Navy performs with a large fleet of ground-based P-8 Poseidon jets. Hypothetically, the Water Dragon could be armed with anti-submarine weapons or long-range anti-ship missiles.

However, such aggressive capabilities are likely secondary to the Water Dragon’s primary purpose: buttressing China’s sprawling claims to the South China Sea by keeping its island outposts well supplied, and by performing maritime governance missions to establish Beijing’s preeminence in the region. Forward deployed AG600s could be used to patrol fisheries; hunt down polluters, poachers and pirates; perform medical evacuation missions, especially, say, after a destructive typhoon; and conduct scientific survey missions.

Performing such tasks could be perceived as ‘global governance,’ while also building legitimacy for China’s claims that it is the exclusive administrator of waters that are, in many cases, much closer to other countries. There is even talk of using AG600s to ferry tourists to resorts built on the contested islands, further reinforcing China’s extra-territorial claims.

Beijing’s ultimate goal is to have a network of maritime bases extending deeper into the Pacific by controlling waters within the “First Island China,” with economic benefits in mind—but also to constrain and control the activities of the U.S. Navy. The placid seeming Sea Dragon could therefore facilitate a strategy of nonviolently shouldering out competitors in the region.

Currently, seventeen AG600s are on order, but there are claims that forty-three to fifty-three more could be purchased. On the other hand, some Chinese military commentators are skeptical of the Water Dragon, citing high maintenance requirements and shortcomings compared to the Japanese US-2 seaplane.

In any case, it will be interesting to observe in coming years how prominently Chinese employs the Water Dragon in the South China Sea, and whether specialized variants are produced to perform specific missions.