Huntington Ingalls Has a New Frigate that Could Give the U.S. Navy Some Impressive Capabilities 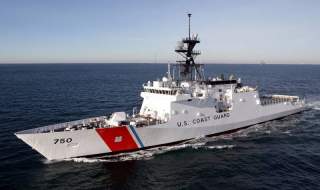 While the U.S. Navy has opted to press forward with plans to develop its Littoral Combat Ships into frigates, the service has other options to choose from if the decision is revisited during the Trump administration. One such design was on prominent display at the Huntington Ingalls Industries booth at the Surface Navy Association conference in Crystal City, Virginia, next to the Pentagon.

The proposed HII design—called the FF4923, which is based on the U.S. Coast Guard’s National Security Cutter, would be a long-endurance patrol frigate that could potentially offer greater combat capabilities as well as range and endurance for a lower price. Company officials told me that they are building nine NSC vessels for the Coast Guard and a Navy variant would be a relatively quick conversion.

The proposed HII frigate—which the company is primarily gearing toward the export market—is a 4,675 metric ton design that is 418-feet long and a beam of 54-feet. The vessel would have a crew size of 121 sailors and would have a range of more than 8,000 nautical miles or more than 60 days. Power would come from a pair of 9,655shp diesels and 30,565shp gas turbine—giving the ship a top speed of just above 28 knots. HII says it could increase the speed to more than 30 knots, but suggested that an incrementally greater sprint speed is not worth the additional cost—especially for the patrol mission.

In terms of sensors and weapons, the HII FF4923 would be well furnished. It would include a 3D rotating phased array radar, an EO/IR sensor, passive ECM, hull-mounted sonar and towed-array or variable depth sonar. It would be armed with a Mk-41 vertical launch system with 16 cells capable of carrying the Standard SM-2 and RIM-162 Evolved SeaSparrow Missile. It would also be equipped with ASROC anti-submarine rockets, eight Harpoon anti-ship missiles, a single triple torpedo launcher and a 76mm gun. HII officials said that their frigate design could be a directly replacement for the now retired Oliver Hazard Perry-class guided-missile frigate that was mainstay of the Navy’s fleet for decades.

For ship self-defense, the FF4923 would be equipped with the Raytheon SeaRAM close in defense systems as well as two remotely controlled and four manually operated .50 caliber machine guns. It would also be equipped with anti-missile and anti-torpedo defenses. In addition to the ship’s own capabilities, the FF4923 would have the ability to carry a MH-60R Seahawk helicopter and two unmanned aerial vehicles. It would also be able to launch and recover a 7m rigid-hull inflatable boat.

Altogether, the FF4923 is a formidable design—which will see service in a foreign navy if not our own. HII officials said that the design is affordable mostly because the Coast Guard design had so much additional unused space, weight and power available. Perhaps, with any luck, HII might be able to persuade the U.S. Navy to buy a few.